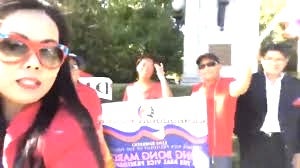 Blogger who calls herself “Maharlika”(left) leads a band of anti-Robredo supporters near fundraiser for the Filipino American Symphony Orchestra. YOUTUBE

On June 17, 2017, the Filipino American Symphony Orchestra (FASO) held its first fundraising and awards gala dubbed “A Night of Symphony, Excellence Awards Dinner and Gala, Inspiring and Empowering Musical Artistry” in Los Angeles. Featured as its guest of honor and keynote speaker was The Honorable Leonor G. Robredo, Vice President of the Republic of the Philippines.

FASO’s primary purpose in holding the awards dinner and gala was to recognize Filipino Americans who have exhibited excellence in the musical arts and provided generous volunteer service to the orchestra and to raise funds for its projects. These outreach programs include music workshops for the young Filipino Americans and subsidizing public concerts featuring classical music and traditional and contemporary Philippine music.

FASO is preparing for its tenth year anniversary in 2018 and some of the funds raised are earmarked for projects slated for the 2018 season.

Regrettably, a certain blogger based in Los Angeles, known by her media name as Binibining Maharlika or plain Maharlika, sought to politicize the FASO event by publicly falsely accusing FASO of secretly raising funds for Vice President Robredo. Maharlika is an avowed and vocal supporter of Ferdinand Marcos, Jr., who has waged a legal challenge for the position of Vice President of the Philippines.

In her social media accounts, Maharlika published the statement that FASO was secretly fundraising for Vice President Robredo and posted video material and photos of the event, including photos of the Board of Directors of FASO and the guests of the gala event. Maharlika also published a written commentary of the same content. The language she utilized was vile and offensive.

On the day of the event, Maharlika and a dozen or so supporters gathered at the venue location and repeated the false statements that FASO was secretly fundraising for Vice President Robredo and accosted guests who were en route to the event. Their group prominently featured a massive pro-Marcos banner. 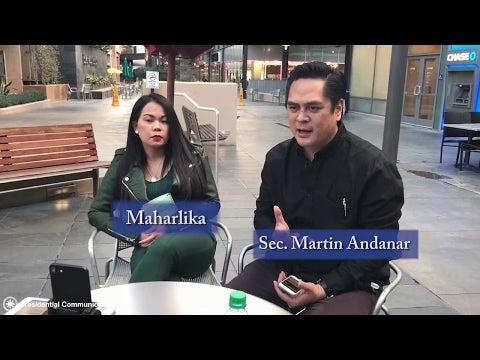 FASO, as a 501 (c)(3) non-profit corporation, is prohibited by U.S. tax laws from contributing to any political parties, personalities, and their political purposes. FASO strictly complies with all laws applicable to it. Statements made by Maharlika and her supporters alleging FASO raised funds or financially contributed to any politician, including Vice President Robredo, are false and damaging to FASO, its reputation and the reputation of its Board of Directors and members.

These statements created the false impression that FASO has violated the terms and conditions of its non-profit status. FASO believes these statements of Maharlika and her supporters are defamatory in nature.

One of the participants at the protest rally organized by Maharlika was one Fernandico Gonong, Jr., who is the current president of the non-profit corporation known as the Filipino American Communities of Los Angeles (FACLA). Mr. Gonong was interviewed at the rally and he fully endorsed Maharlika’s false statements and questioned FASO’s invitation of Vice President Robredo in its event. Mr. Gonong also posted, on his Facebook wall, the YouTube clips of Maharlika which featured her defamatory statements about FASO.

FASO takes these false allegations seriously and has properly sought the assistance and advice of counsel in this regard.   FASO protects and promotes the interests of its members as well as the Filipino American community it has lovingly served for nine years. FASO shall advisedly, prudently, and soberly consider the proper course of action at the present time. It reserves for itself all rights and remedies accorded to it under the law.

MOST READ
usa Credit card utilization – everything to know
usa Five ways to become a successful entrepreneur
usa Filipino farm workers hold the line, save cows despite BC flood
usa Andres Bonifacio, a Freemason until the end
usa Breaking the Silence: The perils faced by women migrant workers
usa Best coffee maker for home use
usa U.S. must study data before deciding on travel ban over new Covid variant – Fauci