More frequent and larger wildfires are among the most visible threats from climate change in California, but flooding, increased air pollution, the spread of infectious diseases and more days of extreme heat also are looming. (Hannah Norman/KHN Illustration)

While the U.S. has moved away from the landmark Paris Agreement on climate change, the state of California has dug in. Alongside New York and Washington, it created the United States Climate Alliance, a coalition looking to uphold the agreement through state actions. It’s also fighting with the Trump administration over the state’s long-standing restrictions on car emissions, which traditionally have been more stringent than federal standards.

The state, with its range of climates and landscapes, faces multiple threats from climate change. More frequent and larger wildfires are among the most visible, but flooding, increased air pollution, the spread of infectious diseases and more days of extreme heat also are looming. The connection between climate and health was the topic of a recent panel in San Francisco at the Kaiser Family Foundation (Kaiser Health News, which produces California Healthline, is an editorially independent program of the foundation).

Among the panelists was Kate Gordon, Gov. Gavin Newsom’s senior adviser on climate and also director of the Governor’s Office of Planning and Research. She is tasked with helping curb the state’s carbon emissions and limit the risks of climate change. Gordon spoke to KHN about how that work intersects with health, and how residents can get involved. The conversation has been edited and condensed for clarity.

Q: Can you tell us a little about the link between climate change and health? What are the concerns?

I think there are several important links. One of them is just the impact of physical climate change on the California environment. Things like extreme heat in Southern California, the Inland Empire, the Central Valley. Outdoor workers can have heatstroke. Kids can be in danger of that if they go outside during P.E. So, that’s a real issue for a lot of folks in those parts of California.

We recently saw the wildfires and the impact on air quality as specific public health impacts up in the northern part of the state and in Los Angeles.

I think one that people don’t think about quite as often is the link between how much people are driving in California and climate change and health. As a state, our transportation emissions continue to go up, which is a real issue from a climate perspective. It’s also a real issue from a health perspective because of particulate matter and the other greenhouse gas emissions beyond just carbon [that can cause a range of health issues, including asthma and heart disease].

And the other thing I’ll say about that is the amount of time people are spending in their cars is time they are not physically active. And that’s definitely a health problem. There are about 21,000 deaths per year in California that are traced back to physical inactivity.

Q: Where has California made the most progress in preparing for and preventing the health risks of climate change?

California has made important strides on the link between direct mobile sources of pollution and health. Our cap-and-trade program, our carbon trading program in the state, the proceeds from that go into a budget that we call the Greenhouse Gas Reduction Fund. That money gets spent on specific things to help reduce greenhouse gas emissions, and in particular to address the impact on disadvantaged communities.

One big piece of that is the AB 617 program. It helps communities put in air monitors, [and] it funds in-depth community engagement around pollution issues. 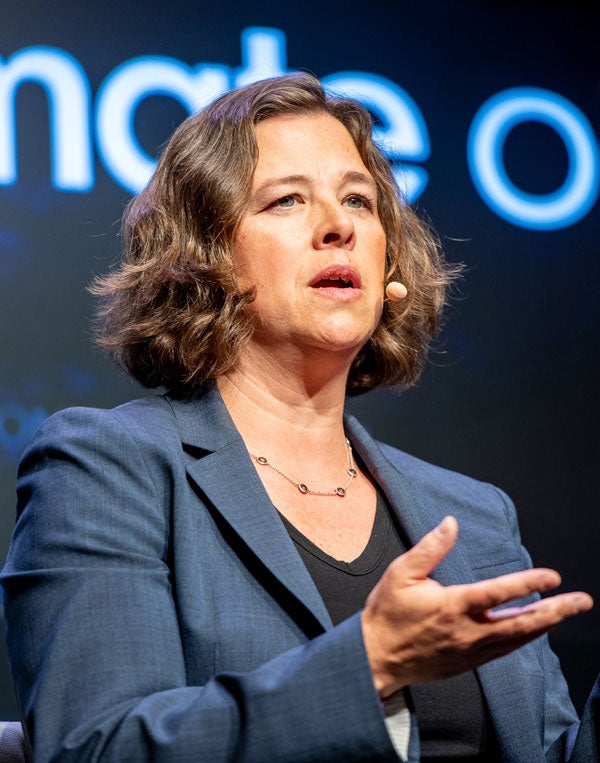 We’ve also put a significant amount of funds into things like engine replacement for heavy-duty trucks, off-road vehicles and agricultural vehicles. All of those things make a difference in terms of on-the-ground health impacts. They reduce overall greenhouse gas emissions, and they have a profound local impact. We’ve also made a lot of progress on methane reduction, which is a health issue in the more agricultural parts of the state.

Q: Where does more progress need to be made?

When I started in this job, we did an analysis of all our big climate change goals and where we are in meeting them. And through that analysis, we came to find that one key area where the state needs to do more is transportation. That’s electrifying vehicles and finding other types of fuels. But it’s also that land-use question: How do we reduce vehicle miles traveled and the amount that people are traveling around the state?

The second one that’s related is land use generally. How do we protect our natural and working land from being converted to urban land? Controlling urban sprawl is important both from the perspective of people not driving so much, but also because every time we convert natural land or working land to urban land, we create massive amounts of emissions. And we lose the ability to take carbon out of the air.

Planning toward the changing climate is a huge priority for the state, and it has to underlie everything we do: how we plan transportation, how we do infrastructure, how we do housing projects. This is all impact from emissions that are already in the atmosphere. It’s three to five decades of emissions that are already baked into the atmosphere. So, we’re looking at quite predictable changes in the climate and the ability to prepare for them.

Q: Sea level rise comes up a lot when we talk about climate change. But what about heat?

I’d say sea level rise is an issue for California, but it’s a chronic long-term issue; it’s not happening tomorrow. It’s something we need to start preparing for, but it’s not an acute problem here in the way it is for hurricanes and storm surge on the East Coast.

Heat is increasingly a big deal. We have parts of the state that are already experiencing months of days over 95 degrees. And extreme heat waves. We started to see that in just the last couple of years. It has acute impacts, because during a heat wave, mortality rates go up, crime rates go up. We lose labor productivity and have increased risk of things like heatstroke. That’s agriculture, obviously, but also landscaping, manufacturing.

Q: Climate change can be overwhelming to people because the scale of the problem is just so big. Do you have advice on what individuals can do?

I think you’re absolutely right: It’s overwhelming and can feel like this big global problem that it’s not easy to get your head around. For sure, people can be focused on decisions they personally are making, about their own home gardening or preparedness, but also being engaged in local politics: Are we replacing a train track, or are we doing highway repairs, or are we doing sewer repairs? And are we thinking about these things from a local perspective?

I also feel strongly that housing in California is a crisis, and it is a climate crisis as well as an inequality crisis. We have to get involved in local government and pushing for more housing to be built in smart places, getting away from this whole sprawl development pattern that we’ve gotten into as a state.

It is not good for us in myriad ways. It is increasing vehicle miles traveled. It’s increasing the conversion of land to urban uses. It is making us far less resilient as a state, as people move more into the wildland-urban interface and also as we lose the land that acts as a critical fire break between urban and rural areas. We really need to be paying attention to this, and I think for too long, housing has been seen as this local issue that people feel very sensitive about.