Fate of DACA Dreamers – and one of their lawyers – in hands of U.S. high court

Fate of DACA Dreamers – and one of their lawyers – in hands of U.S. high court 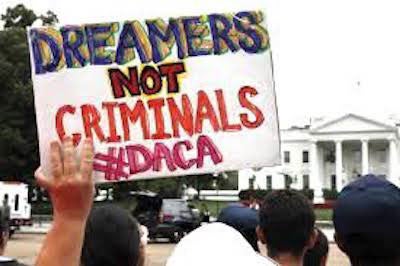 Among the lawyers representing almost 800,000 DACA recipients in front of the Supreme Court  was Ted Olson, a veteran who has argued in front of the high court so many times that even the janitorial staff and the elevator operator greeted him by name that day. Accompanying Olsen was Dreamer Luis Cortes, 31, also a lawyer.

“As we walked into the building, you could feel the gravity of the place,” Cortes said in an interview. “This is the same space that has changed history, from desegregation to woman´s rights and so many other things. Olson has argued there 65 times. It was my first time even being inside.”

As they settled in their seats inside of the hearing room, Olson introduced Cortes to the man who would argue against their case: Noel Francisco, solicitor general of the United States, representing the Trump Administration against DACA.

“Olson made sure to tell Francisco that I was co-counsel and that I was one of the DACA recipients they would argue about,” said Cortes. “We shook hands and he said something like ‘great,’ then moved away. He might have been a bit uncomfortable after that.”

The questions don´t predict the outcome

After the arguments were over that day, various experts started to predict how the justices may vote based on their questions. Several media stories anticipated a negative result for DACA, particularly because of questions from Chief Justice, John Roberts, who is expected to be the tie-breaking vote in a court that often rules 5-4.

Neither Cortes nor other experts interviewed for this story feel that way, insisting that justices’ questions cannot predict their vote.

Thomas A. Saenz, president and general counsel of the Mexican American Legal Defense and Educational Fund (MALDEF), referred to similar news analyses  that ran after the arguments were presented to SCOTUS regarding adding the citizenship question to the 2020 U.S Census by the Trump administration.

“Let me remind everyone that seven months ago, they all decided we were going to lose on the citizenship questions because of what Roberts said in the hearing,” Saenz said. “I don´t put a lot of stock on that assessment. Justices, in particular Roberts as it appears from recent history, do consider carefully the implications of a decision. And the implications here are huge.”

Roberts, a conservative, sided in June with the four liberal justices to rule against allowing the Trump administration to add the citizenship question to the 2020 Census, a result no one had predicted a few months ago. Some are banking on a similar surprise from Roberts this time, but no one can really tell what´s going to happen.

After the Nov. 12 DACA hearing, Cortes and Olson left the room optimistic about the results, Cortes said.

“A lot of the time justices use the questions or a conversation for one of the other justices,” he said. “We left very optimistic –we had the best answer with every question that was asked and left everything on the table.”

The possible results for Dreamers

The DACA program, a deferred-action decision allowing temporary legal status to hundreds of thousands of immigrants who arrived in the U.S.  as children, was put in place by former President Barack Obama in 2012. In 2017, the Trump administration announced it would phase out the program, alleging that it was illegal from the very beginning.

Federal courts issued nationwide injunctions, blocking the administration´s plans to end DACA and forcing the continuation of program renewals. SCOTUS took the unusual step of taking up the cases before lower courts had fully heard them.

SCOTUS could rule at any time before next June, and it would all fall in the middle of a presidential election year, a fact that could affect the President´s mind and political calculations, said Frank Sharry, a veteran Washington observer and executive director of America´s Voice, a pro-immigration reform group.

Sharry believes Trump is less likely to move on terminating DACA if the court says it should be done differently.

“If the court says the Trump administration did have the authority to terminate but that it did it in the wrong manner, then there´s a chance he won´t do it at all,” Sharry says.

“I think Trump understands the backlash, because it was big after the revocation was announced in 2017,” Sharry added. “He may try to get away with saying that he will take care of it after the election and keep his base happy that they won and at the same time not completely alienate moderates who support the program. But he doesn´t know if he will be there after the election.”

For Nico Espiritu, a lawyer with the National Immigration Law Center (NILC), a ruling like that from SCOTUS would give Dreamers more time to stay in the country.

“If it´s sent back to the lower courts saying it wasn’t done right, SCOTUS will have to issue another rule to wind down the program,” said Espiritu. “This would allow those still receiving DACA to continue to stay and be authorized to work and protected from deportation.”

Sharry added that Dreamers can apply for an extra two years even if their current DACA has not expired. “There will be a major push for them to do it as soon as possible,” he said.

If SCOTUS rules that the Trump administration did everything right and DACA is allowed to expire, DACA recipients are likely to be allowed to finish their current period in the program and then be put on deportation, but they could still fight it individually, said Saenz. These individual deportations in backlogged immigration courts could take a long time.

In that case, a future new president could restart the program again, issuing another rule, or a new Congress could take up the Dream Act.  If Trump remains president, all bets are off, however.

Bill Hing, law professor at the University of San Francisco, expects major protests and mobilizations by the Dreamers, the best organized immigrant group in the country, if DACA is allowed to expire by the SCOTUS decision.

“I think we would see some of the biggest protests in the movement so far,” he said. “They have a lot of support.”

For Dreamer-lawyer Luis Cortes, who practices immigration law, the future lives of his clients are at stake, as well as his own.

“I worry about my clients, but my future is tied up with theirs,” Cortes says. “One of the reasons I was fighting this case is to prevent my clients from being deported, and me with them.”