Houston quarterback Deshaun Watson hit DeAndre Hopkins for two touchdowns Thursday to lead the Texans to a 20-17 victory over the Indianapolis Colts in a battle for the NFL’s AFC South division lead.

The Texans, coming off an embarrassing 41-7 loss to the Baltimore Ravens on Sunday, improved to 7-4, breaking out of a tie with the Colts for the division lead and ensuring Indianapolis wouldn’t have a sweep of their regular-season series.

Houston trailed early in the fourth quarter when Watson unleashed a deep throw to his left where Hopkins was racing up the sideline to make the 30-yard touchdown catch that put the hosts 20-17 ahead.

The Texans’ defense forced the Colts to punt on their next possession and stopped Indianapolis quarterback Jacoby Brissett a yard shy of the first down on fourth-and-7 with three minutes left to play.

Although Indianapolis forced a fumble from Watson in the final minute, officials ruled it was recovered by Houston.
The Colts disputed that call to no avail and the Texans were able to run out the clock.

“It’s huge,” Watson said of the key division victory in the wake of the disappointing performance against Baltimore.

“We kept fighting,” he said.
“We knew that Sunday wasn’t our best day — we didn’t come out to play.

“We definitely needed this one.”

Hopkins, whose first touchdown of the night was a 35-yard catch in the second quarter, finished with 94 receiving yards. 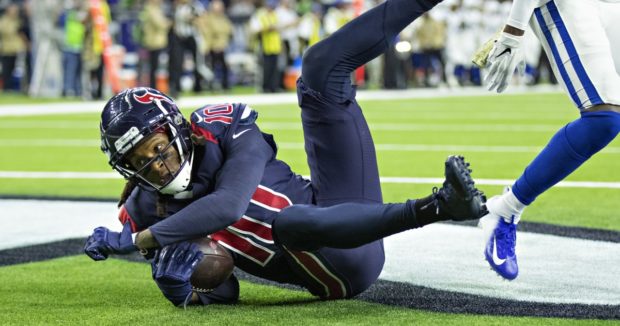