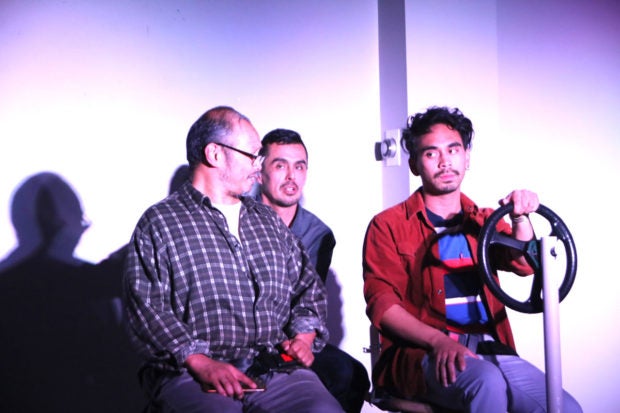 Presented by Theatre Rhinoceros, the longest running queer theatre in the world, to kick off its 42nd season, it is one of those plays that could work in any space, large or small.  “Driven” is staged at Spark Arts, a small art gallery and creative and performance space in The Castro, lending a more intimate setting to an already intimate play of three characters. It feels like you are watching it in the living room of somebody’s home.

The creative use of a rudimentary set—four stools with seatbelts and a steering wheel attached to a stand suggesting a car—and a simple lighting set up using a primary palette beamed directly at the actors give the performance a stark look as if the actors and the play itself were caught in headlights.

Not a lot of suspension of disbelief is needed for you to be drawn in by the characters and the story, which is a testament to the play’s strength and the level of acting by an ensemble cast with the right chemistry and intensity. 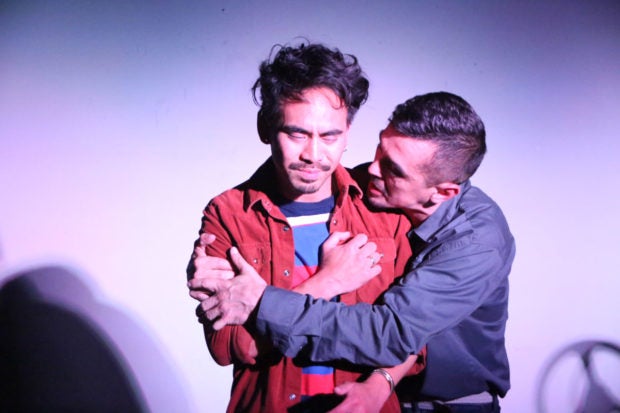 Alan S. Quismorio as Arnel is nuanced and convincing as a Filipino immigrant father to Danny, sensitively played with emotional intelligence by Earl Paus, who has to deal with the ironies and complexity of his relationship with his father as well as his evolving relationship with Qulie, played with vigor by Héctor Ramón Zavala.

Penned by Los Angeles-based Filipino American playwright and actor Boni Alvarez, the play is nearly excellent in its presentation of a relatable and universal slice of Filipino American life, except for one dramaturgical flaw in its rendition of Arnel in relation to Filipino American history. Arnel, in an effort to hide his sense of vulnerability, reminds Danny throughout the play of how he worked hard in the fields in Stockton, picking asparagus to earn a living and provide for his family—an allusion to being a part of the manong (elder) generation of migrant farmers and cannery workers whose lives and experiences form a significant part of early to mid-20th century American history.

Conceivably, it is to add more weight to the character’s backstory as well as to serve as a reminder to those who might have forgotten this part of Filipino American history; but the numbers does not add up for Arnel to be old enough to have been a migrant farm worker with a son who is only in his 30s. This is a bothersome detail, like a stray pebble in your shoe if you know the timeline of Filipino American history. However, this apparent artistic license does not diminish the overall merits of the play.

It is rare to see plays centered on the Filipino American experience written and directed by Filipino Americans that are presented in spaces outside the Filipino community.  “Driven” is an opportunity for an unadulterated, close-quarters look into a slice of Filipino American life through a father and son relationship. It explores the baggage of history, issues of identity, and the binding ties we carry on our road trip through life. A heartwarming comedy with love at its core, it is an intimate play done in an intimate space that deserves a broad audience.