“He is a very special person as far as this country is concerned,” Trump said of Cook as they stood side-by-side, adding that he’s done a “great job.”

The visit gave Trump a chance to hail American manufacturing and step back, at least temporarily, from his tirade against big technology firms, including Apple, which he criticizes for manufacturing its products abroad.

Great news! @Apple announced that it is building its new Mac Pro in Texas. This means hundreds of American jobs in Austin and for suppliers across the Country. Congratulations to the Apple team and their workers! https://t.co/FMrWFq9wcz

Trump praised what he said was an “incredible product that is made right here.”

“When you build in the United States you don’t have to worry about tariffs,” he said, referring to those waged by China.

Apple announced in September it would keep making its Mac Pro computer in the United States, after obtaining tariff exemptions for some components in the high-end computers.

The developments show an unusual Trump-Cook relationship in sharp contrast with the president’s attacks on other tech giants.

“On the face of it, it’s an unlikely relationship,” said Roger Kay, an analyst at Endpoint Technologies Associates who follows the sector.

Cook, who supported Democrat Hillary Clinton in 2016, has been able to sidestep much of Trump’s anger by being “very diplomatic,” Kay said.

Today I opened a major Apple Manufacturing plant in Texas that will bring high paying jobs back to America. Today Nancy Pelosi closed Congress because she doesn’t care about American Workers!

“He hasn’t made any disparaging public comments.
By not ruffling Trump’s feathers he’s gotten quite a lot out of it.”

Cook and Trump remain far apart on a number of issues including trade and immigration, with Apple opposing the White House plan to end protections for so-called “dreamers” who came to the US as children.

While Apple has acknowledged it has paid some tariffs imposed by Trump on goods imported from China, the iPhone maker has so far avoided a major impact from the trade friction.

I promised that my policies would allow companies like Apple to bring massive amounts of money back to the United States. Great to see Apple follow through as a result of TAX CUTS. Huge win for American workers and the USA! https://t.co/OwXVUyLOb1

Trump, who has called Google and social media firms “biased” and been especially critical of Amazon CEO Jeff Bezos — accusing him of using his personal investment in The Washington Post for politics — has had mostly praise for the Apple CEO.

“Other companies hire very expensive consultants,” Trump said in August.
“But the only one who calls me is Tim Cook.
He calls me whenever there’s a problem.”

Trump, who once referred to the CEO as “Tim Apple,” appears to be forging a friendly relationship with Cook even when he offers criticism.

In one tweet, he seemed to fret over the design of the latest iPhones which no longer have a home button.

“To Tim: The Button on the iPhone was FAR better than the Swipe!” Trump wrote.

According to The Wall Street Journal, Cook has quietly cultivated his relationship with Trump through the president’s daughter Ivanka and her husband Jared Kushner, both of whom advise the president.

President Trump just toured a Texas plant that has been making Apple computers since 2013 and took credit for it, suggesting the plant opened today. "Today is a very special day."

Tim Cook spoke immediately after him and did not correct the record.

Trump appears to have softened some of his positions on tariffs after hearing Cook’s argument that punishing Apple would help foreign rivals such as Samsung.

“Tim Cook has gone out of his way it seems to develop a relationship with President Trump because he was concerned I’m sure of the potential impact on the business” from Trump’s policies, said Bob O’Donnell of Technalysis Research.

Because most Apple products are manufactured in China, “there was a potentially large impact on profitability,” O’Donnell said.

“Tim Cook is trying to be pragmatic and trying to address the issue by tackling it head-on.” 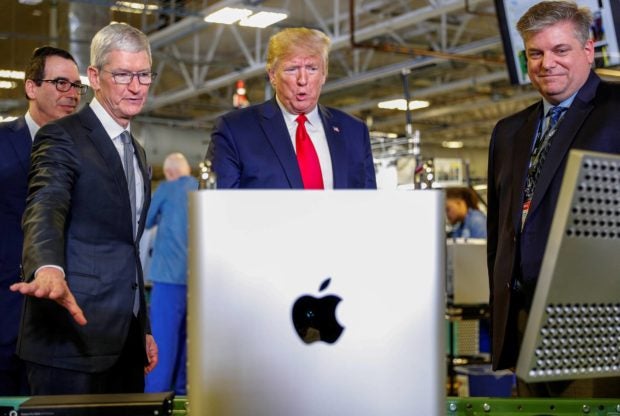 Apple, which benefited from legislation signed by Trump that reduced taxes on repatriated profits from 35 to 15 percent, has responded to White House efforts by pledging to invest $350 billion in the US economy by 2023 through its own manufacturing and from suppliers.

O’Donnell said that Cook’s efforts to forge a relationship with Trump has some risks as well in Silicon Valley, where the president is unpopular.

“I think some people who are Apple fans and don’t like Trump find it a little disconcerting,” O’Donnell said.

Kay said however that Apple employees and customers understand the needs of the business, and that Cook’s efforts might even ease some of the tensions between the White House and the tech industry.

“If he puts a human face on Silicon Valley, it could give Trump a slightly different view.”