Private Group Building Part of the Wall in Texas Cities

Claims that a private group has started building its own border wall in South Texas were questioned this week by some longtime residents worried that the construction could cause flooding and violate treaty obligations between the U.S. and Mexico.

The organizers of We Build the Wall, a nonprofit launched in December to support President Donald Trump’s signature promise of a border barrier, said this week in a Facebook video that they were going to build a 3.5-mile (5.6-kilometer) project on private land in the Rio Grande Valley, at Texas’ southernmost point.

Drone footage of the #cartel #rape hamlet identical to #Epstein Island
All the same history of countless horrors, #slave trade of #children #torture death
This is happening in Mission,Texas on the TX/MX border
See this @GregAbbott_TX ??
NEED MO WALL #MAGApic.twitter.com/S0dGMrGvUA

In the video, a construction worker claims the project would be as close as 25 feet (7.6 meters) away from the Rio Grande, with a wall and concrete road. That’s much closer than most government-built walls in the Rio Grande Valley.

“This is going to cause catastrophic flooding to all the surrounding properties on the U.S. and Mexico side,” said Marianna Trevino Wright, executive director of the National Butterfly Center, a nonprofit that is up the river from the construction site.

We Build the Wall has raised over $25 million. So far, the group has built about half a mile (0.8 kilometers) of wall near El Paso.

The video, which seeks more donors for the group, shows an excavator clearing brush from the riverbank.

The video’s claims could not immediately be verified. We Build the Wall founder Brian Kolfage, who is seen in the video, did not respond to several requests for comment made through a spokeswoman, and the video appeared to have been taken off the group’s Facebook page on Friday.

Unlike at other parts of the border, the U.S. government in the Rio Grande Valley doesn’t build barriers at the edge of the land border.

That’s because the Rio Grande often swells and can knock down structures closest to the river. A large fence or wall could also change flood patterns and endanger existing homes and property. 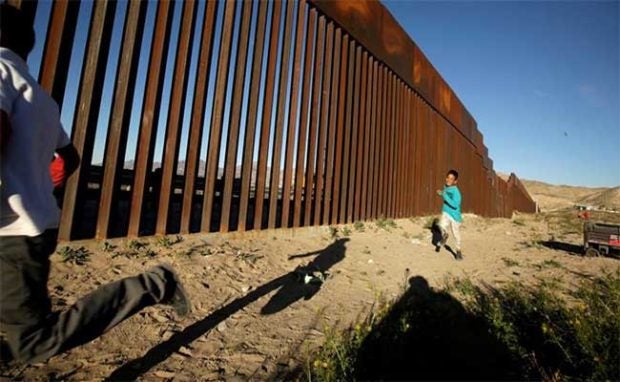 The International Boundary and Water Commission was set up by the U.S. and Mexico under treaties that define the border and how the river is used.

Anyone building a fence within the river flood plain is supposed to submit plans and design calculations to the commission.

Spokeswoman Sally Spener said the commission received an email Wednesday night with “some general information” from Fisher Industries, a construction company that built the group’s half-mile section near El Paso.

Asked about whether the project met the commission’s guidelines, Spener said, “We have not received the documentation that would be required to make a determination.”

The U.S. Border Patrol also says it was notified but did not consult with We Build the Wall on the design and location of any construction. And Hidalgo County officials said they could not immediately confirm whether Fisher Industries or We Build the Wall had sought a permit.

The Border Patrol and other government agencies are building small portions of the new wall in at least two sites in the valley. The U.S. government is still well short of the 500 new miles (800 kilometers) that Trump has called for building by the end of next year.

Terence Garrett, a professor of public affairs at the University of Texas Rio Grande Valley, said construction not done carefully could “cause major, major flooding.”