Thank you for your service, truth-tellers 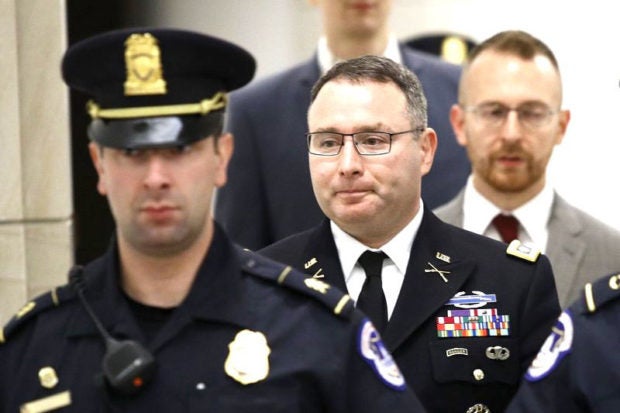 “Thank you for your service.”

If I had a dollar for every time I heard that on Veterans Day, I might be in the one percent, (and I’d gladly pay Elizabeth Warren’s wealth tax).

I personally stopped saying the phrase after I greeted a Filipino American friend of mine who served in the Air Force in Vietnam, and all he could do was shake his head.

The politics of the day was giving him post-traumatic stress, bringing back the feelings he had  in uniform in the ‘70s when he  came home and felt like hiding. He thought about it all again after the current president’s recent actions to pull U.S. troops in Syria. What got him was seeing video clips of betrayed Kurds throwing  potatoes at the retreating U.S. soldiers.

“Those guys died inside,” my friend Chris told me. “I know it. But they were just following orders.”

And then I saw the president on Veterans Day, the draft-dodger in chief, the bone spur poster boy who did not serve when called. That didn’t stop him from paying homage to those who did. And of course he had to insert how he got Baghdaddi on his watch. What a hero.

Despite bone spurs, he’s still our commander in chief.

Will we thank him for his service as the public testimony in the impeachment inquiry begins this week?

It all begins with top U.S. diplomat Bill Taylor who has already testified behind closed doors that it was his “clear understanding” that Trump held up military aid for Ukraine and that it would not come until Ukrainian president Zelensky “committed to pursue the investigation” on the Bidens.

Taylor is probably the most feared witness. Taylor is a career diplomat who has served under both Republicans and Democrats. He’s also a West Pointer who served during the Vietnam War. We should thank him for his service now.  Will Trump?

At some point I expect we’ll also hear publicly  from Lt. Col Alexander Vindman who has already testified behind closed doors.  He was on that July 25 phone call that Trump calls “perfect.”

It wasn’t to Vindman, the top Ukraine expert for the White House, who said he reported his concerns to his superiors that the president was linking foreign aid in exchange for political dirt on the Bidens.

Vindman, a Purple Heart recipient, has already been smeared by Republicans who took his being born in Ukraine as a sign he was a double agent.

Asian Americans know what that’s like. It’s no different from being a scientist in a lab and people wondering if you’re a Chinese spy. Happens all the time. In the last month, it’s happened to Vindman.  Will it continue? Or will Trump and his ilk find some other way to smear a man in uniform.

When Vindman goes public we should thank him too  for his service as a true patriot. This is the importance of these public hearings we are about to witness.

It’s for our benefit. And it’s simple enough that Trump can understand it.

That July 25th phone call had proof of a bribe. Military arms for political investigation. Serve Trump and he will serve you. It’s conduct unbecoming of a sitting president.

And now about Nikki Haley

In politics it’s all about timing and cover. You pick your little sliver of truth to use as your umbrella/shield in the storm, hoping to emerge when the clouds pass and the sun rises a survivor.

That’s what Nikki Haley’s new book seems to be about.

You got to hand it to Nikki Haley, the Southern-born daughter to South Asian immigrants, former governor of her home state, former U.S. ambassador in the Trump administration.

She’s shrewdly positioning herself to inherit Donald Trump’s base and emerge as a multi-cultural survivor of these divided times.

Will it happen? Not if you believe in the truth.  But you’ve got to admire her self-service.

Her book is a guide for all Republicans who have trouble with the evidence that points to Trump as  deceitful and incompetent.

On her book tour, while the president is skewered by people under oath, Haley has created her own platform to give her proper version of the Trump rationale.

Essentially it boils down to this: The president’s actions in that July 25th phone call are “not impeachable.”  That there were “no demands” on the Ukrainians, as she told NBC News.

But the money was held up, right? “It was released,” Haley says.

So that excuses the president for holding up the money? Haley insists the money “was released.”

So going back to the Trump trope of shooting a man on 5th avenue and not losing a vote, Haley is saying if the victim lives and doesn’t die, don’t even bother with an attempted murder charge. Forget witnesses, fingerprints on the gun, and the president with blood on his hands. Victim is alive! Everyone’s free!

And that logic allows Haley and others to go after the real villains—the Bidens, and don’t forget Hillary and her emails have to be included in there somewhere. And if that doesn’t work, the election is less than a year, let’s let the people decide at the ballot box.

I say why wait? The public testimony is for all our benefit to help us make a decision now.

Don’t be distracted by Haley and other Republicans blind insistence on loyalty to Trump.

Haley on the Today show was particularly galling when asked if the president were truthful.

The president has been fact checked to be untruthful or misleading more than 12,000 times since he took office. All Haley could do in his defense was hang on to the sliver of truth she knew first hand.

“In every issue I dealt with him he was truthful, he listened and he was great to work with,” Judge Nikki said on the Today Show.

At that point, I expect millions of viewers lost their breakfast.

Don’t be distracted by the nonsense spewed by Nikki Haley. And remember how she dealt with the truth s when she runs for president and asks for your vote.

For now, stay focused on this  truth: The president held up military aid to Ukraine in exchange for a political investigation on the Bidens. Serve Trump, serve yourself. Win-win? Not in a  democracy. Not under our Constitution.

Forget the defenders like Haley. In these public hearings, keep in mind people who will be testifying under oath.

Thank them for their service.

Emil Guillermo is a journalist and commentator. He writes a column for the Inquirer.net’s North America bureau. Follow on Twitter @emilamok. Listen to him on Apple podcasts.