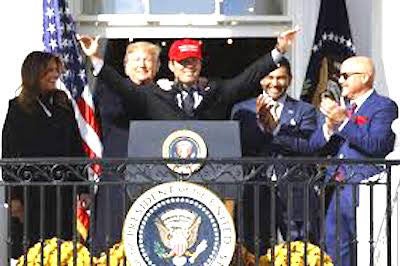 President Donald Trump about to give a bear hug to Washington Nationals’ Kurt Suzuki who is wearing a MAGA hat. REUTERS

The Democrats pretty much wiped the floor with Republicans in the big elections around the country. The Kentucky governor’s race, the Virginia state house. The Democrats cleaned up.

But for Filipinos and Asian Americans in general, the election had a slightly different tone.

In San Francisco, where about 30 percent of the city is Asian, we still mourn the passing of the city’s first Asian American mayor, the late Ed Lee–the community activist turned bureaucrat turned can-do civic cheerleader.

His replacement, London Breed, appears to have won her bid to her own term (I say “appears” because a massive number of ballots by mail has yet to be counted).

But the race did feature an Asian American challenger.

It just wasn’t the kind of challenger you’d expect.

It was Ellen Lee Zhou, an also-ran who finished with about 15 percent of the early vote. The self-described conservative, NRA member, and city social worker (how’s that for a stereotype- defying combo) got some attention for putting up a racist billboard attacking Breed.

In a cartoon depiction, there’s a black woman lounging with her shoes off counting money while a white male hauls off a young girl. In a thought balloon are characters who appear homeless. At the bottom are nonsensical words that don’t quite add up: “Stop slavery and human trafficing [sic] in SF.”

Huh? By her billboard, would you say Zhou is good at math, bad at spelling?

Zhou later put out a statement: “The billboard speaks for San Franciscans who say, ‘We are tired of the homeless not being taken care of with the money the taxpayers have paid to help them.’”

San Francisco’s political class condemned the ad, and the billboard was taken down.

But Zhou’s Chinese supporters are on record essentially saying that this sort of thing was no different from what Donald Trump does.

The acknowledgment of trickle-down politics as modeled by the current leader of the free world is sad. It’s divisive politics marked by racist innuendo perpetrated by conservative Asian Americans.

Asian Americans nationally are 21 million and growing. We are a diverse group with ancestral connections to all parts of Asia—including the Philippines.

But we’re still a relatively small group unless we join a strong coalition of people of color, who share the same experiences of historical and present-day discrimination and continue to fight for diversity and inclusion.

In other words, we’re still part of a broad American community. And even the best of us who have tasted some success in this country don’t take the elevator to the penthouse and forget to send it back down.

But the Trump way as adopted by Zhou is pretty clear. Boldly break the stereotype, challenge Democrats to gain some personal advantage no matter what cost. Even at the expense of the community.

Zhou in San Francisco is just the latest example.

Over the last few years we’ve seen Asian Americans used by right-wing anti-affirmative action advocates, who are willing to see the end of race as a factor in college admissions. They lost the recent case against Harvard, but the battle is likely to continue to the Supreme Court.

Several years back, I called it the Asian American Civil War. It’s not going away.

Virginia is solidly Democrat at 51 percent vs. 10 percent Republican. Asian Americans helped fuel the turnaround in the state house there. They were also in favor of the House impeachment inquiry. 64 percent yes to 17 percent no.

And if the election were held today. Biden would get 26 percent, Warren 20 percent, Sanders 15 percent. That’s 61 percent total before Trump, at 13 percent.

In Pennsylvania, 68 percent were in favor of the House impeachment inquiry.

Which brings us to Houston, a town I lived in years ago when Chinatown was just a two-block stretch in the downtown area. It’s now practically its own city. Democratic voters in the poll were at 33 percent; Republicans at 30 percent.

As for impeachment, it’s evenly split at 41 percent.

What to make of it?

Established communities like those in Virginia and Pennsylvania still hold a slight traditional Asian American edge. Likely that’s due to older Asian American families who have immigrated before 2000.

But areas like Houston have attracted newer immigrants who are forming new conservative stereotypes.

It’s even cropping up in stronghold cities like San Francisco, as evidenced by Ellen Zhou’s provocative candidacy.

Is it a winning strategy for Asian Americans as a whole? No.

But it’s happening, region by region, especially where Asian Americans are both newer and fewer in number.

And then there’s Kurt Suzuki, the catcher of the Washington Nationals.

I recently wrote that I hoped the Nationals’ World Series win would rub off on the nation and make us see we’re all on the same team and bring a divided country together.

But then the only Asian American ever to hit a home run in a World Series game showed up to the White House celebration this week in a MAGA hat and spoke some cryptic message of aloha.

I would have called the police and filed a #MeToo complaint.

I know Suzuki has formed a charity to fight a family disease and is generally considered a good guy. He also texted a reporter saying he was just having fun.

But Suzuki, who has made nearly $40 million in 12 years as a serviceable but not great catcher in the majors, shouldn’t forget his Maui roots.

Others Nationals players like star third-baseman Anthony Rendon and ace reliever Sean Doolittle, protested against the president and declined to show up at the White House. Doolittle was quite loud and outspoken in his criticism of the president’s divisive rhetoric.

It was a far cry from Suzuki’s love chant displaying a strange aloha for Trump.

Whatever it was, it made him the darling of conservatives.

So, we have Suzuki, Zhou, the Houston voters, and the anti-affirmative action folks. Oh, and Cabinet Secretary Elaine Chao.

Let’s hope people don’t see this as representative of the new Asian America.

From the inside out, it definitely is not.

Emil Guillermo is a journalist and commentator. He writes a column for the North American bureau of the Inquirer.net.  Twitter @emilamok  Find him on Apple Podcasts.