Trump Wants to Raise Minimum Age for Vaping to 21

US President Donald Trump on Friday said he supported raising the minimum age for the purchase of e-cigarettes from 18 to 21 as part of a plan to curtail youth vaping.

But he also indicated that he was concerned about over-regulation on business, a sign the administration is considering stepping back from a previously announced complete ban on flavored e-juices popular among adolescents.

The federal minimum age for purchasing tobacco products is 18, but 18 states and the District of Columbia have set their minimum age at 21.

While I like the Vaping alternative to Cigarettes, we need to make sure this alternative is SAFE for ALL! Let’s get counterfeits off the market, and keep young children from Vaping!

Raising the federal minimum age requires an act of Congress, and the cause has attracted bipartisan support, with one proposed bill co-sponsored by Republican Senate Majority Leader Mitch McConnell.

“We’re going to be coming out with a very important position on vaping,” Trump told reporters.
“We have to take care of our kids most importantly, so we’re going to have an age limit of 21 or so.”

He added that a policy paper would be issued next week.

Pres. Trump says his administration is looking at "an age limit of 21 or so" on vaping: "We'll be coming out with something next week." https://t.co/JsAo4rT8TM pic.twitter.com/hi3B1iz2yi

The administration announced in September it would soon ban flavored products, but it appeared lobbying efforts by the vaping industry may have changed that position.

“We have a lot of people to look at, including jobs frankly,” said Trump.
“It has become a big industry.
We’re going take care of it.”

The vaping industry is facing unprecedented scrutiny amid a mysterious epidemic of lung conditions linked to e-cigarette use that has killed 39 and sickened more than 2,000 mostly young people in the US in recent months.

Investigators say no single substance is behind the outbreak, which has been named “e-cigarette or vaping product use associated lung injury” or “EVALI”. 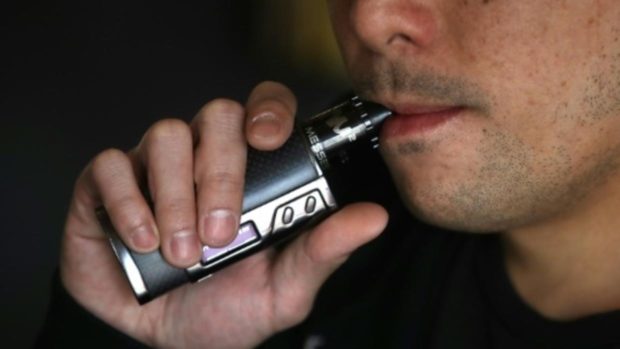 But preliminary work has linked a cutting agent used in cannabis flavorings, usually sold on the black market, to lung injury.

Vaping is increasingly popular among youth, with a government survey this week finding that more than five million middle and high school students reported using e-cigarettes in the past 30 days, an all-time high.

Youth vapers overwhelmingly chose flavors like mint, mango, cream, fruit, and cucumber, unlike people who are trying to quit smoking and turn to tobacco flavored pods.

The proposed flavor ban has caused an outcry among vaping businesses, who argue they strictly ID their customers to confirm their age.