E-cigarette market leader Juul said Thursday it was ending the sale of mint-flavored products in the US, ahead of a possible ban by health authorities that are intended to curtail youth vaping.

The decision follows the release earlier this week of the 2019 National Youth Tobacco Survey that said more than five million middle and high school students reported using e-cigarettes in the past 30 days, an all-time high.

US President Donald Trump’s administration announced last month it would soon put an end to the sale of flavored liquids used in e-cigarettes, though whether there will be some exemptions is not yet clear.

No more mint Juul pods — #Juul is stopping sales of its mint flavor after two studies showed a big increase in teen use. https://t.co/JxDfwBTHqn

The youth survey found that mint flavor was the clear favorite among 10th and 12th graders, and second favorite after mango among 8th graders.

The mango-flavored liquid was sold by Juul until very recently and continues to be sold by other makers.

Juul’s CEO KC Crosthwaite said: “These results are unacceptable and that is why we must reset the vapor category in the US and earn the trust of society by working cooperatively with regulators, attorneys general, public health officials, and other stakeholders to combat underage use.” 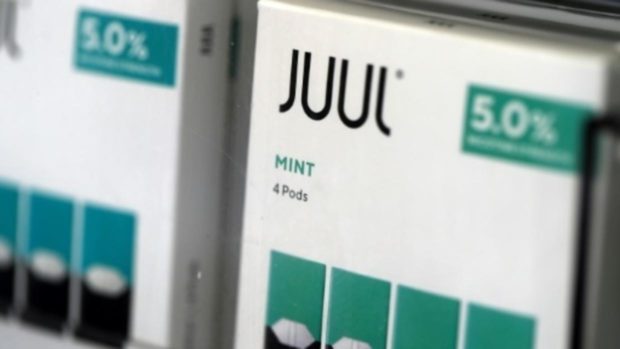 The company will continue to sell Virginia tobacco, classic tobacco, and menthol in the US market, but has not announced similar flavor rollbacks for other countries.

The move comes as the vaping industry is facing tough scrutiny amid a mysterious epidemic of lung conditions linked to e-cigarette use that has killed 39 people and sickened more than 2,000 in recent months, according to the latest data published Thursday.

Investigators say no single substance is behind the outbreak, but preliminary work has linked a cutting agent used in cannabis flavorings, usually sold on the black market, to lung injury.

Juul is also facing a lawsuit by a former executive who claims he was sacked for “whistleblowing” for objecting to shipment of allegedly contaminated pods and other unsafe conduct like selling expired or near expired products.

The company has called the allegations baseless.