US rapper T.I. has provoked outrage by revealing that he forces his 18-year-old daughter to undergo an annual “virginity test” at the gynecologist.

The Grammy-winning musician told a podcast how he escorts Deyjah Harris to the doctor’s office after each birthday to “check her hymen.”

“Usually like the day after the (birthday) party, she’s enjoying her gifts, I put a sticky note on the door: ‘Gyno. Tomorrow.
9:30,'” T.I., whose real name is Clifford Harris, told the presenters.

T.I. shares that he goes to the gynecologist every year with daughter Deyjah to ensure her hymen is still intact 😳https://t.co/VSjnDd9S1S pic.twitter.com/IPZsHz8dSW

The trips began after Deyjah’s sixteenth birthday, Harris said, and his daughter is required to sign a waiver allowing the doctor to share the “results” with him.

The episode of the “Ladies Like Us” podcast was released Tuesday but appeared to have been removed Wednesday afternoon after it went viral on social media.

“It’s extremely abusive to police your daughter’s hymen and any doctor who would participate in such an act needs to lose their license,” tweeted author Ijeoma Oluo.

Rapper T.I. proudly admitted on a podcast this week that he takes his daughter to the gynecologist every year to ensure her hymen is still intact (since, ya know, virginity is defined by an intact hymen 👀) https://t.co/YOaMqU1ILp

Jennifer Gunter, a gynecologist, and bestselling writer added that “hymen exams are medically not a thing,” and that the so-called tests “support a disgusting patriarchal trope.”

The presence of an intact hymen — which can easily be broken without engaging in sexual activity — is not regarded as an effective way to test virginity.

In the podcast, female hosts Nazanin Mandi and Nadia Moham laugh at Harris’s comments, jokingly referring to his daughter as a “prisoner.”

Harris’s representatives did not immediately respond to request for comment.

A Twitter account appearing to belong to Deyjah Harris had “liked” several comments condemning the rapper’s behavior, including one describing it as “disgusting, possessive and controlling.” 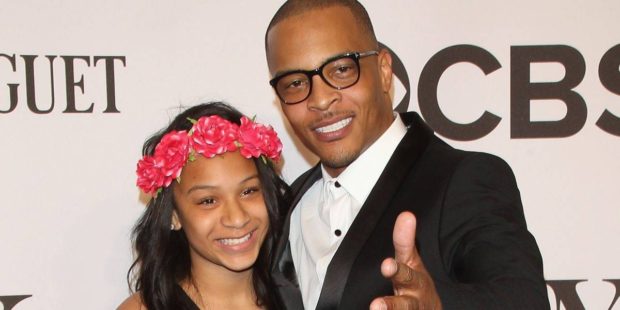 Harris, 39, is one of the leading forces in trap music, a style of hip-hop from the US South that emphasizes aggressive lyricism and 1980s-style drum machines.

He served seven months in prison in 2009 for attempting to buy unregistered machine guns from dealers who turned out to be undercover agents.

He spent another 10 months in prison two years later for violating terms of probation on drug charges.

He has won three Grammy Awards, including for the song “My Love,” a collaboration with pop star Justin Timberlake.