LeBron James scored 30 points, grabbed 10 rebounds and passed off 11 assists on Tuesday, leading the Los Angeles Lakers to a 118-112 comeback NBA victory at Chicago with his third consecutive triple-double.

Anthony Davis produced a season-low 15 points on 6-of-15 shooting with seven rebounds in a return to his hometown, but James surged in the final minutes as the Lakers unleashed a 29-4 fourth-quarter run.

It was only the third time in James’s career that he has produced three consecutive triple-doubles after 2009 and 2017.

The Lakers improved to an NBA-best 6-1 with a third straight road win, having won six in a row since losing their opener to the Los Angeles Clippers.

The Lakers return home for a Friday game against Miami, which fell to 5-2 with a 109-89 loss at Denver.

“We’ll have a good rest and we’re going to need it before we play Miami,” James said.

The Lakers, the NBA’s top defensive club, captured their sixth straight meeting with Chicago, matching the club’s longest active run against any rival.

The Bulls, paced by Zach LaVine’s 26 points, led 65-48 at half-time and were up by as much as 19 in the first half and 18 in the third quarter before the fightback began.

Los Angeles trimmed the deficit to 93-80 after three quarters, then began the fourth with a 16-0 run sparked by reserves, with Quinn Cook’s three-pointer for a 94-93 lead putting the Lakers back on top for the first time since the middle of the first quarter.

You down with the Freshness? #LakeShow pic.twitter.com/f46TH3znbp

“Our bench is going to be key for us.
Our depth has been a good ingredient for us,” James said.
“They were great.
Without them, we don’t get this win.”

The Lakers outscored Chicago 38-19 in the fourth quarter and looked like the dominant team James hopes can reach the NBA Finals.

“We can’t think about the finals even though that’s our aspiration,” James said.
“We have small goals in mind and that’s to be the best defensive team in the league every night.

“We took a step backward in the first half but we made up for it in the second half by just locking them down.
We have to be able to win in adverse situations.”

They will face another test Friday against a Miami team that was blown out at Denver.
Jamal Murray scored 21 points to lead six Nuggets in double figures while Jimmy Butler led Miami with 16 points.

Hayward Has a Hot Hand

Gordon Hayward scored 39 points, his most in a Boston uniform, and added seven rebounds and eight assists for the Celtics in a 119-113 victory at Cleveland.

Hayward shot 17-of-20 from the floor including 16-of-16 from two-point range — becoming the first player since Wilt Chamberlain in 1967 to sink so many two-pointers in a game without a miss.

Kemba Walker contributed 25 points and eight rebounds for the Celtics, who improved to 5-1.

Atlanta’s Trae Young returned from an ankle injury and produced game-highs of 29 points and 13 assists to lead the host Hawks over San Antonio 108-100.

“I was super anxious to get going,” Young said.
“My teammates set me up.
They knew I was going to catch fire and I did.” 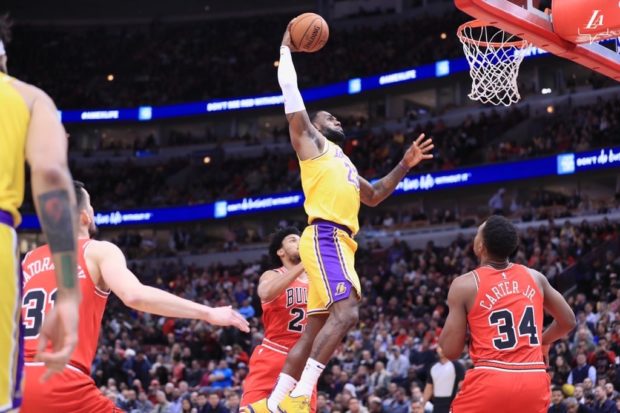 Charlotte’s Devonte Graham scored a game-high 35 points off the bench, including two game-winning free throws with 1.7 seconds to play in overtime, as the Hornets edged visiting Indiana 122-120.

Terry Rozier added 22 points and reserve Bismack Biyombo scored 13 of his 15 points in the fourth quarter to power a Hornets victory fightback.

T.J. Warren scored 33 points and Malcolm Brogdon added 31 to lead the Pacers, who forced over-time at 113-113 on Brogdon’s layup with 16.8 seconds remaining in regulation time.