A Year Before 2020 Election, a Divided and ‘Angry’ America

America on Sunday kicked off the one-year countdown to Election Day 2020, with President Donald Trump betting an “angry” Republican surge can deliver him a second term, and Democratic candidates battling for a chance to win back the White House.

The building clash — dramatically fueled by the House of Representatives’ impeachment inquiry into Trump — virtually guarantees another year of division in a nation grown weary of such drama.

Trump told reporters on Sunday he is “very confident” of being reelected, saying: “We’re doing very well in the polls.”

But polling suggests that the United States couldn’t be much more divided.

The latest projection from a University of Virginia political science team points to a dead-even 2020 race, with each party leading in states totaling 248 electoral college votes — short of the 270 needed for election.

“What works in San Francisco does not necessarily work in Michigan.”@SpeakerPelosi is worried about whether 2020 Democratic candidates are on the right track in terms of their policy proposals to defeat President Trump in the upcoming #2020Election. https://t.co/oRWTjVG6ar

The division is reflected in the House, where a vote Thursday to formalize the impeachment inquiry passed almost entirely on party lines — more partisan than any of the three previous impeachment votes in US history.

But while every Republican in the House voted against the inquiry, Trump may be losing support in the broader public.
A new poll shows half of Americans now believe he should be impeached and removed.

As the inquiry proceeds, Trump has lashed out in increasingly crude and personal terms.

Speaking Friday in Tupelo, Mississippi at one of the raucous political rallies he appears to thrive on, Trump called Democratic leaders “mentally violent” and said former vice president Joe Biden, a top Democratic candidate, was getting “slower and slower.”

Amid all the furor and flashy presidential showmanship, Democratic candidates have struggled for a share of the spotlight.

Anxiety has grown among some Democrats that a clear, strong challenger with mainstream appeal has yet to emerge from their huge field. 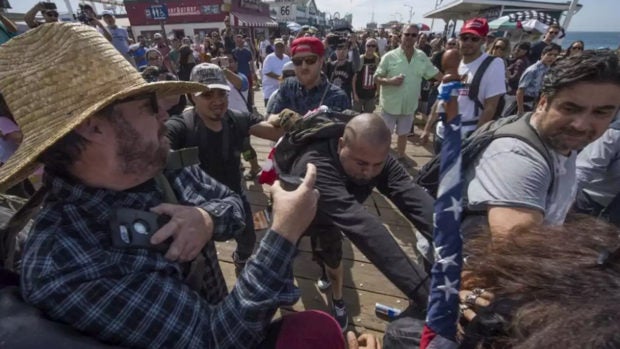 “Our number one goal is to get (Trump) out of office, but you don’t win elections by just being against someone,” Biden supporter Doug Wood said Sunday at a rally for the candidate in Virginia.

Trump’s unproven allegations that Biden and his son were somehow tainted by corruption in Ukraine has weighed on the former vice president, who took to Twitter Sunday to underscore the stakes in 2020.

“We have one year to determine the mark Donald Trump will leave on our country,” he tweeted.
“There’s too much at stake to take the next year for granted.”

Still leading in most national polls, Biden has slipped to fourth place in the early and crucial Iowa caucus, according to a New York Times/Siena College poll released Friday.

That survey put Senator Elizabeth Warren in the lead, at 22 percent, followed by Senator Bernie Sanders, at 19 percent, with a surging Pete Buttigieg, mayor of South Bend, Indiana, at 18 percent, one point ahead of Biden.

But many Democrats fear Warren and Sanders are too liberal to win nationwide and that Buttigieg might not be able to expand his support beyond a core of white, liberal voters.

Sanders took aim at Trump at a Sunday rally in Minnesota, accusing him of seeking to split the country.

“He is trying to divide us up, we’re gonna bring our people together,” the senator said.

In all the political din, Democrats’ messages on health care, gun control, and immigration reform are sometimes lost.

“I do think that, in the short run, impeachment will dominate Washington and political news reporting” and “will hurt candidates trying to crash into the top tier,” said Chris Arterton, an emeritus professor of political science at The George Washington University.

House committees pursuing the impeachment inquiry have heard from a stream of witnesses expressing concern over Trump’s request that Ukraine investigates Biden and his son.

Democrats hope that when they begin releasing transcripts of their closed-door interviews and question key witnesses in open session the public will come along.

Indeed, a new NBC/Wall Street Journal poll shows 49 percent of Americans now believe Trump should be both impeached and removed from office, up 6 points in three weeks.

Yet in his combative appearance in Mississippi, Trump insisted the talk of impeachment could help him.

“I tell you, the Republicans are really strong,” he said, touting the emergence of “an angry majority.”

For now, analysts continue to predict that even if the House votes to impeach Trump, the Republican-dominated Senate will acquit him.

“No one seriously believes Trump will be ousted by the Senate,” said Larry Sabato, director of the University of Virginia Center for Politics, “so the Democrats must concentrate on the campaign.”