Facing a potentially ruinous wave of new sex-abuse lawsuits, the Boy Scouts of America is increasing its annual youth membership fee by more than 80%.

The group says the move, which has dismayed many of the Scouts’ adult volunteer leaders who warn the increase is prohibitively steep for some, is needed to meet rising operating costs, notably for the liability insurance that covers all official Scouting activities.

For years, the BSA has been entangled in costly litigation with plaintiffs who said they were abused by scout leaders in their youth.
Hundreds of lawsuits may lie ahead with the recent enactment of laws in New York, New Jersey, Arizona, and California making it easier for victims of long-ago abuse to seek damages.

The fee increase, disclosed to the Scouts’ regional councils last week, seeks to relieve some of the financial pressure.
As of Jan. 1, the annual membership fee for 2.2. million youth members will rise from $33 to $60; the fee for adults will rise from $33 to $36, the Scouts said.
The increases could generate more than $60 million in additional funds in the coming year.

The BSA says it’s exploring “all available options” to maintain its programs and has not ruled out the possibility of declaring bankruptcy.

As part of that process, the Scouts said they are consolidating their departments and recently eliminated more than 35 positions at its National Service Center.

The BSA’s current youth participation is down from more than 4 million in peak years of the past.
It has tried to offset the decline by admitting girls, but the membership rolls will take a big hit as of Jan. 1 when the Church of Jesus Christ of Latter-day Saints — for decades a major sponsor of Boy Scout units — cuts its ties with the BSA and launches its own global youth programs.

In its announcement, the BSA made no specific reference to the sex-abuse litigation but made clear the fee increase was driven by insurance costs.

“Unfortunately, the cost of liability insurance we must carry to cover all Scouting activities has increased dramatically over the past several months, and the organization is no longer able to offset the cost of insurance,” the BSA said.

In addition to insurance, the BSA said, membership fees cover other “essential services” such as background checks for adult leaders, program development and updated youth protection and safety training.

The national fees do not cover costs for uniforms and handbooks, which can easily exceed $100 per year.

Scores of the Scouts’ volunteer adult leaders weighed in on the fee increase in comments on a blog operated by the BSA’s Scouting Magazine.
Several of the leaders warned that the increase would be financially burdensome for low-income families and might drive them away from scouting.

The BSA insists that the scouting remains a good value, compared with many other organized youth activities.

“While most extracurricular activities are seasonal, Scouting is a year-round program that remains one of the most valuable investments we can make to support young men and women,” the BSA announcement said.

The organization says it will strive to assist families who feel they cannot afford the higher fees.
It announced the creation of a fund, supported through donations, to provide financial assistance.

Many of the volunteer leaders commenting on the blog were upset by the timing of the announcement.
It came after Scout units had already begun collecting fees for their 2020 registration renewal process and setting their budgets for the coming year.

“I am extremely disappointed in the handling of this increase,” wrote John Guild, a Dallas attorney who has helped lead a Cub Scout pack and slammed the move for lack of transparency as well as its poor timing.
Guild also questioned how effective the fee increase would be, contending that the BSA “is facing hundreds of millions of dollars in liabilities and tens of millions of dollars in legal fees.”

Jason Krut, who is active with a Pittsburgh-area Cub Scout pack, called the increase “unconscionable.” 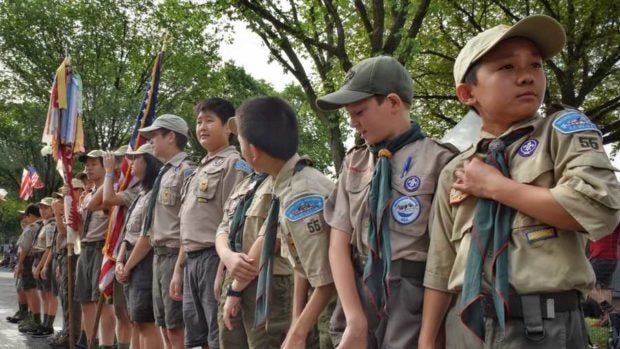 “It reeks of incompetence and mismanagement,” he wrote on the blog.
“It will force children, leaders, and families away from scouting and to seek out BSA alternatives. ”

Brandon Boos, a leader of a Cub Scout pack in Worthington, Ohio, said the magnitude of the increase was understandable but he faulted the timing.

“The roll-out did not demonstrate the same high quality of character we are trying to instill in our Scouts,” Boos wrote on the blog.

In a subsequent email to The Associated Press, Boos said he still loves the Boy Scouts, plans to continue as a volunteer and hopes other parents do likewise.

Donald Dement, a volunteer leader with his sons’ Boy Scout troop in Frisco, Texas, said most of the parents would have no trouble affording the higher fees, while hard-up families would likely get assistance from their troops.

Dement said some conservative families in Frisco continue to resent major changes made by the BSA in the past decade — these included opening its programs to girls, and admitting gays as scouts and adult leaders.
One local troop, he said, made hats for summer camp last year emblazoned with “Make Scouting Great Again.”

But regarding the fee increase, he said most scouting families “will be understanding and accepting.”

The Boy Scouts filed lawsuits last year against six of its own insurers, saying they have improperly refused to cover some of the sex abuse liabilities incurred by the organization.
The insurers say the coverage obligation is voided because the BSA failed to take effective preventive measures such as warning parents that scouts might be abused.

“We believe insurance companies should uphold their commitments by paying their share of claims,” the BSA said in an email to The Associated Press on Thursday.
“We remain in disputes with some carriers and look forward to a resolution that benefits victims and helps them on their journey towards healing.”