While US President Donald Trump plots a long one-year re-election campaign — and a bitter fight against impeachment — his Democratic rivals are still months from determining who his 2020 challenger will be.

It has been a grueling race for the party’s nomination.
More than two dozen candidates in the diverse field, from prominent elder statesmen to political neophytes, started the journey, and some 18 remain.

Once again, Putin and the Russians are interfering in the elections and trying to pick our president — this time they're coming after me.

Chip in $5 to send the message to Putin that the American people decide elections, not him: https://t.co/6ehaYAjgxA pic.twitter.com/o1GTKnizUY

Democratic debates with increasingly high qualification thresholds have sought to narrow the field and enlighten voters about candidate platforms from health care and climate change to gun laws, immigration and foreign policy.

With one year before the election, and barely three months until the first votes are cast in the nomination contest, beginning in Iowa, here are the must-know elements about the Democratic showdown. 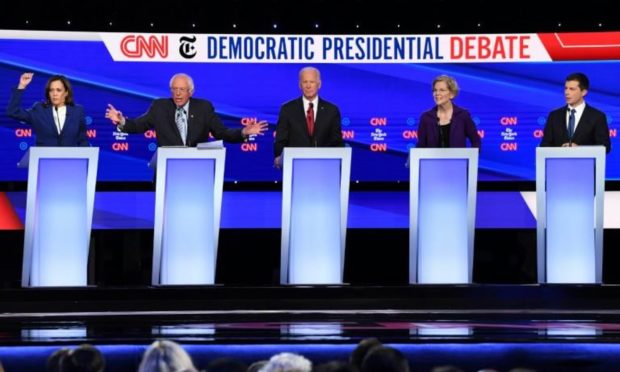 “I know I’m the frontrunner,” Biden proclaimed to CBS on its “60 Minutes” show broadcast Sunday, pointing to the majority of polls that show him ahead.

“But look, this is a marathon.”

Doubts have crept in about whether Biden, who served in the Senate for 36 years, can go the distance.

He turns 77 in three weeks, and for several minutes during a recent speech in Pennsylvania, his nostalgic childhood recollections suggested a longing for bygone days rather than eying the future.

But Biden is drawing substantial support from two crucial voting blocs: African Americans loyal to him for his eight years serving with president Barack Obama, and working-class white men who see him as the best chance to defeat Trump.

Snapping at Biden’s heels is Elizabeth Warren who, along with her liberal Senate colleague Bernie Sanders, has energized the progressive wing of the party.

She has ridden an uphill trajectory by intoning “I have a plan for that” — a pitch that signals she has thought out a broad swathe of policy proposals for improving the economy, expanding LGBTQ rights and reforming criminal justice.

Donald Trump's erratic foreign policy has abandoned our allies, abdicated our leadership, and tarnished our reputation. It has to stop.

In a Biden administration, America will once again lead by example and rally the world to meet our common challenges. https://t.co/qPHYk6SaDF

As her popularity expanded, so did the political target on her back. At the October debate, rivals attacked her lack of clarity on how to pay for her universal health care proposal.

Medicare for All’s staggering cost is projected at between $14 and $34 trillion.
Centrists such as Biden say the exorbitant cost is unworkable.
Warren, 70, says she will release details soon. 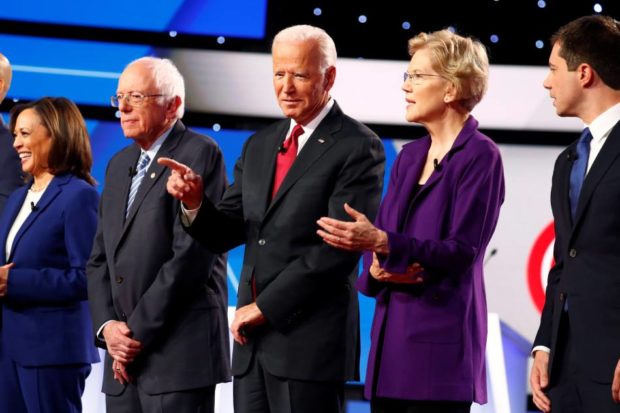 As Democrats battle for supremacy, the rare political drama of impeachment is playing out in Washington.

Most Democratic candidates are demanding Trump’s ouster.
But it is the very impeachment investigation, with its bombshell witness depositions, which is sucking up the political oxygen, denying 2020 campaigns the exposure they need to thrive.

Caught in the crossfire is Biden.
Trump stands accused of pressuring Ukraine to investigate Biden and his son Hunter, who worked for a Ukrainian energy company while his father was vice president.

While there is no evidence of Biden’s wrongdoing, the appearance of poor ethical judgment could cloud Biden’s path.

A Trump impeachment would mean a trial in the Senate, severely complicating the campaigns of six senators who remain in the 2020 race but would be anchored to Washington during the proceedings.

I’m not afraid to say the word union. America’s unions built the middle class — and in a Biden administration, we’ll work alongside them to rebuild it. pic.twitter.com/VZnCFtAEEB

Biden and Warren are dominating, but viable rivals remain.

They include Sanders, at 78 the oldest candidate, who is recovering from a heart attack suffered in early October.

Sanders, who narrowly trails Warren in the RealClearPolitics poll aggregate, is the race’s most liberal and has called for nothing less than a political revolution to rehabilitate America’s working class.

Senator Kamala Harris surged after the June debate where she confronted Biden, but she has struggled to remain in contention and slipped to the fifth spot.

Buttigieg, the 37-year-old mayor of South Bend, Indiana, has soared past her with a compelling performance in recent months.
His centrist Midwestern realism has helped him gain traction.

Lower-tier candidates are under tremendous pressure to claim a breakout moment, perhaps at the next debate November 20, or exit.

But those of ex-congressman Beto O’Rourke, Senator Michael Bennet, Montana Governor Steve Bullock, and others appear to be on the chopping block.