SAN FRANCISCO — The spirit of volunteerism in the fight against cancer pervaded the successful recent evening staging of a gown and swimsuit fashion fundraising event at Pomeroy Event Center in San Francisco.

Now on its second year, “Fashion with a Mission’ presented jointly by Share + Give Initiative and the Philippine Medical Society of Northern California (PMSNC), again featured cancer survivors showing off their healthier selves, proving to everyone that there is an even colorful life after beating the Big C.

The fashion show also featured the launch of the United Against Cancer 2020 Swimwear Calendar that were available for sale together with T-shirts with prints in support of the fight against cancer. Proceeds will go to the Philippine Senior Resource Center (PSRC), which helps senior Filipinos against the dreaded disease. 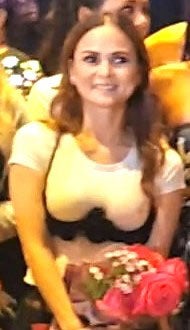 Share + Give Initiative founder Gia Galicia said that some 7,000 patients received services from the $15,000 raised in the first Fashion with a Mission last year. INQUIRER/Jun Nucum

Share + Care Initiative founder Gia Galicia was overwhelmed by the big turnout not just of guests in the audience, but also by the number of hands who were willing to offer their time and effort.

“The first Fashion with the Mission last year raised $15,000 which allowed PMSNC doctors to treat over 7,000 patients in the Philippines. We want to be able to help these doctors help more people in remote places in the Philippines who don’t have access to health care,” reported Galicia, who got a boost this year from more donors and sponsors.

Last year’s show was emceed by Kalayaan San Francisco Chair Radi Calalang and Trisha Bantigue, who this year was among the volunteer models. Entertainment was provided by comebacking Bay area sensation Jocelyn Enriquez and upcoming star Maddie B.

One of the volunteers was last year’s congressional aspirant Cristina Osmeña who never had much experience doing the catwalk.

“I did this because Gia (Galicia) asked me. Because I was busy campaigning, I only had free time to do it this year. Osmeña shared. “Gia is a wonderful member of the community and it is for a great cause. It supports cancer victims and medical missions. The causes and my relationship with Gia made me do it.”

For the next medical mission, PMSNC has chosen to go to Bacoor, Cavite whose residents have limited medical access.

This sorry situation was confirmed by visiting former Bacoor Mayor and incumbent Cavite Congressman Strike Revilla who admitted that most Bacoor residents had to go to faraway Batangas Medical Center for free major medical attention.

“The 10-bed capacity Bacoor District Hospital (now Southern Tagalog Regional Hospital) we have now is being operated by the provincial government that has been providing only a small budget in the last four years,” revealed Revilla. “So, the surgical mission to be conducted by PMSNC in January next year is most welcomed and we thank them and Share + Give Initiative.”

Revilla added that the mission will be conducted at General Emilio Aguinaldo Memorial Hospital in provincial capital of Trece Martires where there is more modern equipment than the hospital in Bacoor.

The provincial capital hospital can complement the supplies and other medical equipment that the estimated 200 medical doctors and nurses that PMSNC will bring with them to benefit a targeted number of 10,000 to 20,000 indigent Cavite residents.

PMSNC liaison officer Bernadette Roco confirmed that the surgical mission will have both minor and major services aside from the regular medical, optometry and dental services that PMSNC has been doing since 1986 all over the Philippines.

“We are so happy that we are going to help the poor people of Bacoor Cavite who are underserved even if they are close to Manila. The schedule is January 20-24 with about 180 doctors and nurses joining the mission,” Roco revealed..