One of the Democrats attending the meeting, Senate Minority Leader Chuck Schumer, said Trump launched into a “nasty diatribe” against them, while Pelosi said the president experienced a “meltdown.”

What courage does it take to pass legislation that will save lives? @SenateMajLdr McConnell must stop standing in the way of efforts to enact commonsense, bipartisan solutions to prevent gun violence.

The toxic exchange was the latest sign of the dramatically deteriorating relations between Trump and Pelosi since she launched an impeachment investigation against him last month.

“He was insulting, particularly to the Speaker… He called her a third-rate politician,” said Schumer after they abruptly left the White House meeting on Trump’s controversial troop pullout from northern Syria.

Other lawmakers from both parties remained inside, he noted. 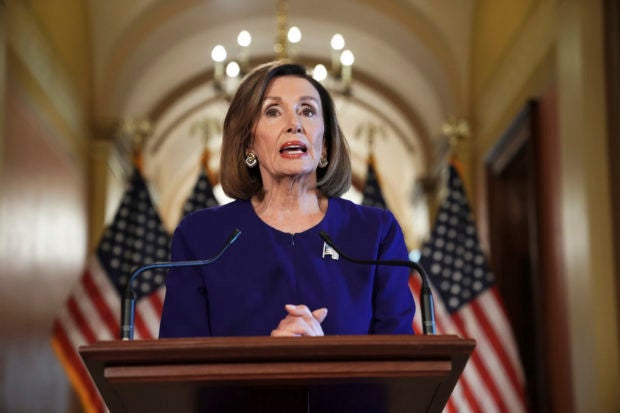 “What we witnessed on the part of the president was a meltdown. Sad to say,” Pelosi added.

House veteran Steny Hoyer, the number two Democrat, said he and others were “offended deeply” by Trump’s treatment of Pelosi.

Trump has repeatedly disparaged Pelosi on Twitter in the weeks since the probe began.

Hoyer sounded alarmed at the intensity of the White House confrontation.

“I’ve been in many, many, many meetings like this,” he said. “Never have I seen a president treat so disrespectfully a co-equal branch of the government of the United States.”

Trump’s spokeswoman Stephanie Grisham rejected the Democratic version of events, saying the president had been “measured and decisive,” and that Pelosi walking out was “baffling but not surprising.”

“Dem ‘leadership’ chose to storm out & whine to the camera,” Grisham tweeted. “Everyone else stayed to work on behalf of our country.”

Addressing reporters after the talks, top House Republican Kevin McCarthy likewise accused Pelosi of “storming out” and exhibiting behavior “unbecoming of a speaker.”

The meeting was the first face-to-face encounter between Trump and Pelosi since her explosive September 24 statement announcing a formal impeachment inquiry.

Pelosi said the investigation did not come up during the meeting.