NBA Commissioner Adam Silver told the Brooklyn Nets and Los Angeles Lakers on Wednesday that the league is still expecting them to play as scheduled this week, even while the rift between the league and Chinese officials continued in ways that clearly suggested the two planned games in Shanghai and Shenzhen were anything but guaranteed.

The NBA called off scheduled media sessions Wednesday for both teams.

Adam Silver, the NBA's commissioner, affirmed that the league will not censor players or personnel after it was criticized for its response to an employee's tweet that expressed support for mass protests in Hong Kong.https://t.co/N7gghBB6Iw

At least two other NBA events to be held Wednesday before the start of the China games were canceled as part of the fallout that started after Houston Rockets general manager Daryl Morey posted a since-deleted tweet last week that showed support for anti-government protesters in Hong Kong.

“Given the fluidity of the situation, today’s media availability has been postponed,” the league said.
The sessions were not rescheduled Wednesday, though having them on Thursday game day in Shanghai remains possible.

Later Wednesday in Washington, a bipartisan group of lawmakers including the rare alignment of Republican Sen. Ted Cruz of Texas and Democratic Rep. Alexandria Ocasio-Cortez of New York sent a letter to Silver saying the NBA should show the “courage and integrity” to stand up to the Chinese government.

They asked the NBA to, among other things, suspend activities in China until what they called the selective treatment against the Rockets ends.

“You have more power to take a stand than most of the Chinese government’s targets and should have the courage and integrity to use it,” the lawmakers told Silver.

The NBA did not have any immediate comment on the letter, and it was unclear if Silver had even seen the document. 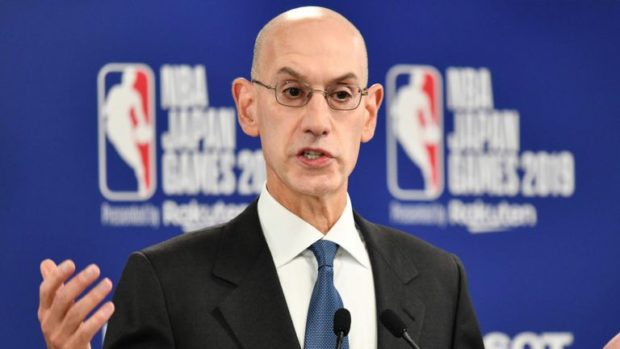 In Shanghai, the mood surrounding the game that if played will feature LeBron James, Kyrie Irving, and other big NBA names was anything but festive.

An NBA Cares event that was to benefit the Special Olympics was called off, as was a “fan night” celebration that was to be highlighted by the league announcing plans to refurbish some outdoor courts in that city.

And workers in multiple spots around Shanghai were tearing down large outdoor promotional advertisements for Thursday’s Lakers-Nets game.

The teams are also supposed to play Saturday in Shenzhen.

Chinese smartphone maker Vivo has joined the list of companies that have suspended ties with the NBA for now, only adding to the uncertainty surrounding the China games.

Vivo was a presenting sponsor of the games, and on Wednesday there was no reference to the game in Shanghai on the list of upcoming events scheduled at Mercedes-Benz Arena.

Other firms such as apparel company Li-Ning announced similar moves earlier this week, as the rift was just beginning.

Silver said Tuesday in Tokyo that he supports Morey’s right to free speech.
Several Chinese companies have suspended their partnership with the NBA in recent days, and Chinese state broadcaster CCTV said it will not broadcast the Lakers-Nets games.

“I’m sympathetic to our interests here and to our partners who are upset,” Silver said.
“I don’t think it’s inconsistent on one hand to be sympathetic to them and at the same time stand by our principles.”

All around China, stores that sell NBA merchandise were removing Rockets-related apparel from shelves and many murals featuring the Rockets even ones with Yao Ming, the Chinese great who played for Houston during his NBA career were being painted over.

Effects are already being felt in NBA arenas, in a pair of games featuring Guangzhou Loong Lions of the Chinese Basketball Association. 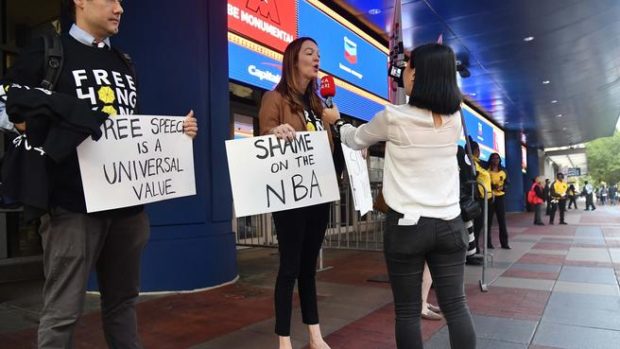 After the playing of the Chinese national anthem in Washington on Wednesday before Guangzhou’s game against the Wizards, one fan shouted, “Freedom of expression! Freedom of speech! Free Hong Kong!” Another fan shouted for a free Hong Kong from the second level during the second quarter.

Minutes later, security approached one fan holding up a “Free Tibet” sign and another holding the Tibet flag.
Security tried to take the sign, and the fan refused to give it up.
Security then escorted them out of the seats.

A similar scene played out in Philadelphia on Tuesday, also during a Guangzhou game.
There, two fans were removed by arena security for holding signs and chanting in support of Hong Kong.

The signs read “Free Hong Kong” and “Free HK.”
The sentiment was not different from Morey’s since-deleted tweet last week of an image that read, “Fight For Freedom.
Stand With Hong Kong.”

The 76ers and Wells Fargo Center, the team’s home arena, released statements Wednesday confirming that the fan removal took place and explaining why.

“During the second quarter of last night’s 76ers game, Wells Fargo Center security responded to a situation that was disrupting the live event experience for our guests,” the arena’s statement Wednesday said.

“After three separate warnings, the two individuals were escorted out of the arena without incident.
The security team employed respectful and standard operating procedures.”

The NBA is not the first major corporation to deal with criticism from China over political differences.
Mercedes-Benz, Delta Air Lines, hotel operator Marriott, fashion brand Zara and others also have found themselves in conflicts with China in recent years.

After Morey’s tweet was deleted, Rockets owner Tilman Fertitta said Morey does not speak for the organization.
Joe Tsai, who recently completed his purchase of the Nets and is a co-founder of Chinese e-commerce giant Alibaba, has said the damage to the NBA’s relationship with China “will take a long time to repair.”