The Latest on the state visit to the U.S. by Australian Prime Minister Scott Morrison. American and Australian luminaries gathered under the stars in the White House Rose Garden on Friday, resolutely “celebrating” even as serious matters of national security and presidential politics combined to cast a cloud over President Donald Trump.

The president and first lady Melania Trump welcomed Scott Morrison and his wife, Jenny, to the White House for just the second state dinner of the Trump administration. 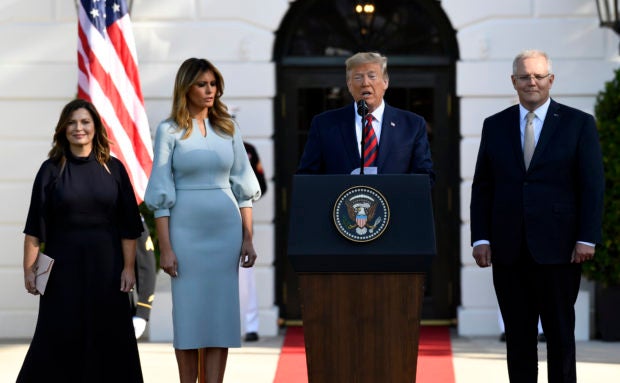 Meanwhile, Defense Secretary Mark Esper was announcing the deployment of additional U.S. troops to the Persian Gulf region in response to a recent attack on the Saudi oil industry. And the controversy intensified over a conversation Trump had with Ukraine’s president.

It is adorned with inverted pleats and bias-cut waves.

The gown was first seen when Mrs. Trump and President Donald Trump greeted Prime Minister Morrison and his wife, Jenny, as they arrived at the White House as the honored guests of the second state dinner hosted by Trump.

The couples enjoyed private time in the White House residence before they came downstairs to the Blue Room to greet more than 170 guests, including Australian pro golfer Greg Norman, Trump attorney Rudy Giuliani and Maria Bartiromo of Fox Business Network. 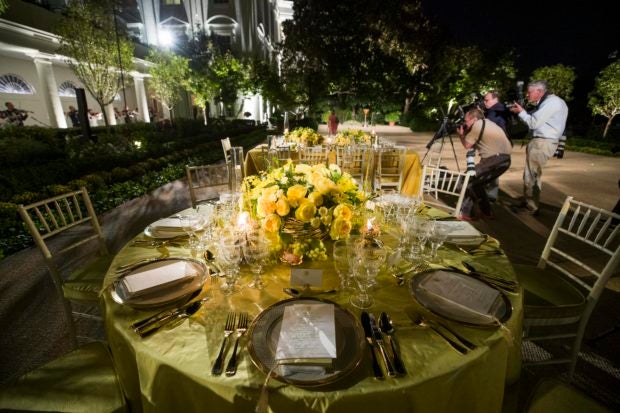 Two tables are set during a media preview for the State Dinner with President Donald Trump and Australian Prime Minister Scott Morrison in the Rose Garden of the White House, Thursday, Sept. 19, 2019, in Washington. (AP Photo/Alex Brandon)

A glittering array of American and Australian luminaries is streaming into the White House Rose Garden for a rare dinner under the stars, even as serious developments unfold for President Donald Trump at home and abroad.

None of the arriving guests, Republican members of Congress among them, are acknowledging that Trump is sending more U.S. forces to Saudi Arabia to protect it after an attack on oil installations.

They are also silent on the scandalous storm clouds hovering over Trump, who urged the new leader of Ukraine this summer to investigate the son of former Vice President Joe Biden, according to a person familiar with the matter.

That’s the heart of a whistleblower complaint against the president.

Scott Morrison has arrived for a glitzy White House state dinner honoring the land Down Under.

President Donald Trump and first lady Melania Trump greeted Morrison and his wife, Jenny, with handshakes and kisses on the Pennsylvania Avenue side of the mansion Friday evening.

Morrison is on a state visit to the U.S., and earlier in the day he received a spirited welcome on the White House South Lawn.

A day of meetings, a joint news conference with the president and other honors was being capped with a rare open-sky dinner in the Rose Garden.

The White House says the Trumps gave the Morrisons a custom-made leather photo album hand-inscribed with 23-karat gold and a Tiffany & Co. pewter bowl engraved with the presidential seal and the signatures of both Trumps.

Trump gave Morrison a model of the USS Canberra, which is currently being built at an Alabama shipyard, and a framed map of the Battle of the Coral Sea, a World War II battle in which the U.S. and Australian naval and air forces fought together against the Japanese.

President Donald Trump says he would love to attend the 2019 President’s Cup golf tournament in Australia in December, but it depends upon what his schedule will allow.

The event features an international team competing against a United States team and is held every two years.

Trump, an avid golfer, says the PGA Tour has invited him to attend, and he described the tournament as “exciting.”

Trump spoke about the President’s Cup during a meeting on Friday with the Australian Prime Minister, who notes he’ll talk about the event with Trump during a State Dinner in the evening.

Trump notes that golfer Greg Norman of Australia is a good friend and will also be at the White House dinner.

President Donald Trump says in a welcoming ceremony for Australian Prime Minister Scott Morrison that “today we celebrate the long-cherished and unwavering friendship between the United States and Australia.”

Trump and Morrison will participate in a day filled with meetings, a joint press conference and a lavish state dinner, the second one of Trump’s presidency.

Trump says tonight’s Rose Garden state dinner “will be quite something.”

Morrison told the president in reply, “thanks, mate.”

Morrison says the Australian delegation brings with it the thanks and respect of 25 million Australians for the U.S.

The two leaders are seeking to demonstrate a strong alliance with Morrison saying the world is a better place with the United States and that the two nations “see the world through the same lens.”

The welcoming ceremony included Marine Band performances of the national anthem of both countries and a 19-gun salute and inspection of troops.

Morrison is just the second world leader to be granted the high diplomatic honor of a state visit during the Trump administration.

The leaders will meet for talks and face journalists at a joint news conference in the White House East Room.

Morrison will also be treated to lunch at the State Department.

They will cap the night with an opulent state dinner beneath the stars in a Rose Garden arrayed in shades of green and gold in tribute to his Australia’s national colors.