Did someone send a memo? Taraji P. Henson, Zoe Kazan, Susan Kelechi Watson, Mandy Moore, and Marisa Tomei all showed up to the Emmys in two-tone looks of pink and red that stood out on the awards’ purple carpet.

The dual tones were the strongest trend among the women on Sunday night, where outfits from Zendaya, Gwendoline Christie and current red carpet darling Billy Porter also turned heads. 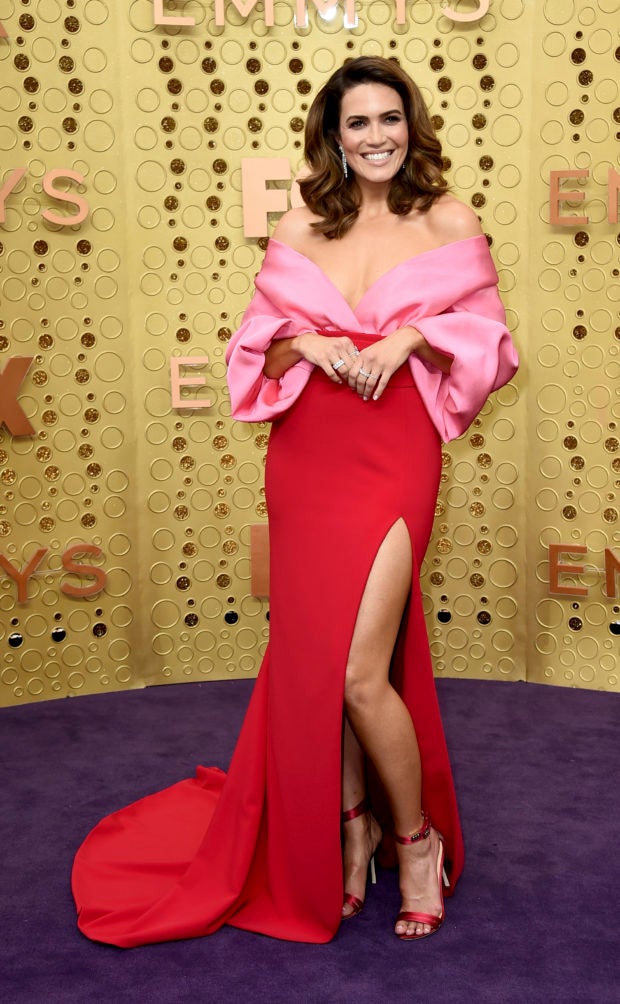 Mandy Moore arrives at the 71st Primetime Emmy Awards on Sunday, Sept. 22, 2019, at the Microsoft Theater in Los Angeles. (Photo by Jordan Strauss/Invision/AP)

While it’s common to see many stars wearing a certain color, the combination of pink and red was particularly eye-popping on the Emmys purple carpet.

“With many also showcasing ’80s hints of bold shoulders, it shows an emerging optimism on the red carpet and a willingness to have a little fun with fashion,” said Kerry Pieri. 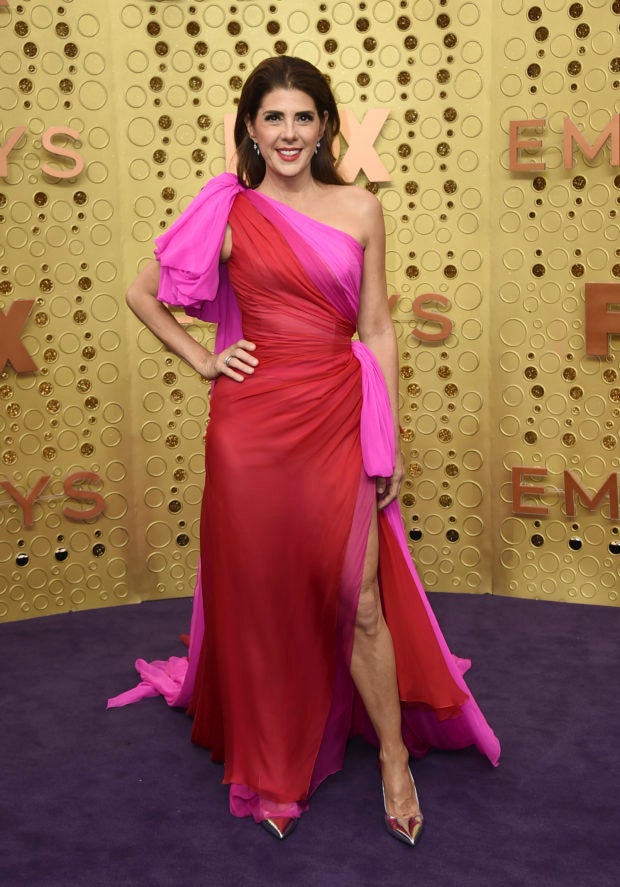 Marisa Tomei arrives at the 71st Primetime Emmy Awards on Sunday, Sept. 22, 2019, at the Microsoft Theater in Los Angeles. (Photo by Jordan Strauss/Invision/AP)

Corsets, too, had a wow moment. Indya Moore wore white Louis Vuitton and Zendaya rocked Vera Wang in green with a daring top.

“Both also had slits up to there, making this the current approach to something sexy. Maybe it means we’re all finally ready to move on from the naked dress,” Pieri said.

Christie was Brienne of Tarth on the popular, defunct HBO series, which won top honors for best drama at the ceremony. 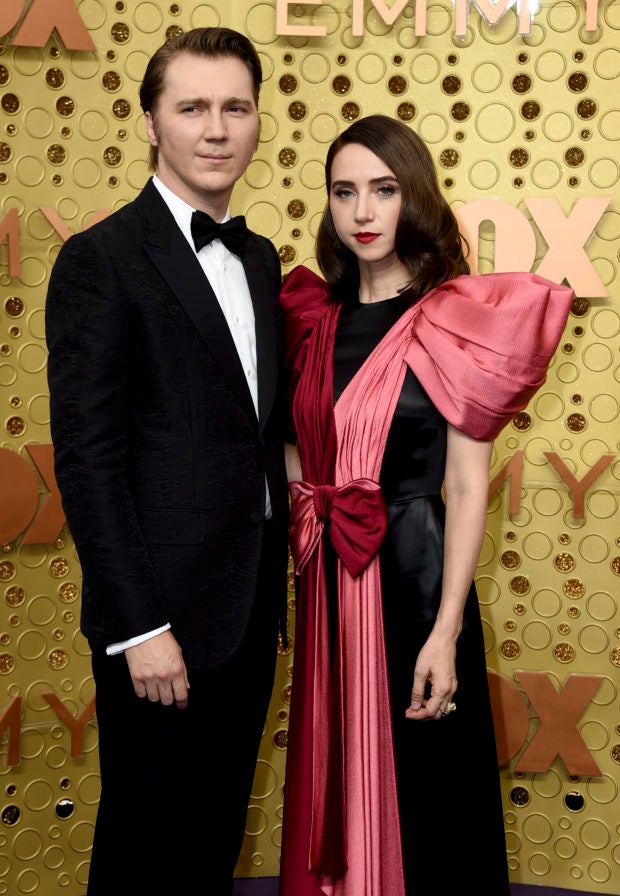 “They stunned in the soft pastel hue which complements a variety of skin tones,” Bobo said, also noting the red and pink parade that made for an “unexpected yet refreshing combination.”

There were some classic Hollywood metallic moments as well, including Julia Louis-Dreyfus in sequined gold and Rachel Brosnahan in navy blue, the latter offering a “modern take on Hollywood glam with architectural accents,” Bobo said about the Emmys Purple Carpet.

Kerry Washington, Angela Bassett, and Amy Poehler all opted for pants, while Porter, who has made headlines with his red-carpet gowns, chose sparkling stripe trousers from Michael Kors and a huge statement hat with a towering brim on one side by Stephen Jones.

Porter ended up making history later as the first openly gay man to win an Emmy for best actor in a drama series for his role of Pray Tell on FX’s “Pose.”

“It was so stunning,” she said. “Absolutely gorgeous. She looked really elegant and beautiful. I’m not used to her dressed up in that way. She definitely wowed.” 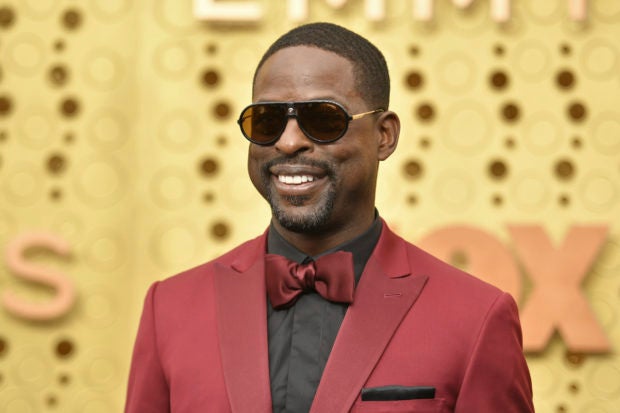 Also on her best-dressed list was Jamil. It was called mint by the designer, Monique Lhuillier. It had a pleated ball skirt with a single-sleeve bandeau top. She wore it with a bright orange lip and matching polish on her nails.

“She looked like a princess but she was very modern. I loved the bangs and her long hair,” Hylton said. “I love color and I love unexpected.”

Among her misses: Greta Lee in an iridescent pistachio green puff midriff top with a full skirt. She made use of her look’s pockets on the purple carpet.

“I see maybe where she was going, but I didn’t think it looked good on her,” Hylton said. “Maybe if it was black it would have been a more classic look.”

Hylton was underwhelmed for a good half of the carpet.

“I was bored,” she said. “On the men, the brown tuxedos were just drab.”

But Jonathan Evans, the style director for Esquire, praised men in brown like Dan Levy and others who changed things up. He also included “Brett Gelman with his rusty shawl collar tux and Kit Harington’s conspicuous air tie.”

“It gave me flashbacks to her Met Gala Disney moment on the Emmys Carpet,” she said, “but this time she served Poison Ivy realness with strawberry tresses to complement her green number.”

She also heralded Bassett, in a custom crimson look from Antonio Grimaldi, with sculptural neckline and dramatic cape detail to her top. Bobo said the actress “continues to make waves on the red carpet.”

But her top moment was Lee wearing Christopher John Rogers, a top and skirt look from his spring-summer 2020 collection.

“This was a major win for designers of color, who rarely make it to the grand stage at these sorts of events,” Bobo said.