US Senate bill to shield DACA ‘Dreamers’ from Trump

US Senate bill to shield DACA ‘Dreamers’ from Trump 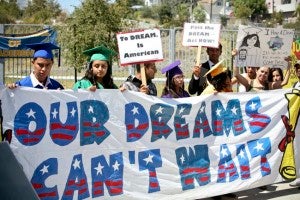 More than 740,000 young people were granted deportation reprieve and work permits under the program, but could now lose those protections if Trump implement his threat.

If the bill passes, Dreamers could live without constant fear of deportation and continue to legally work and drive. If it fails to pass, it could still put pressure on Trump to desist from punishing DACA recipients.

“As President-elect Trump toys with the lives of 740,000 youth with DACA, it is vital that Congress decisively resolve the uncertainty that these individuals live with every day,” stated Mee Moua, AAAJ executive director.

Moua explained that the Bridge Act “is a limited measure to resolve an urgent situation for those with DACA, over 18,000 of whom are from Asian countries.  Ending DACA would result in many people losing their jobs, drivers’ licenses, and health insurance. It will cause anxiety and place people at risk for deportation.

While we strongly support these efforts to save DACA, we have grave concerns about placing anyone in permanent second-class status.”