Gardner Minshew threw two touchdown passes and should have had a third, Calais Campbell spearheaded another defensive gem and the Jacksonville Jaguars handled the Tennessee Titans 20-7 in sloppy conditions Thursday night.

Jacksonville (1-2) ended a four-game losing streak in the AFC South series and avoided the franchise’s second 0-3 start in four years.

With all eyes on star cornerback Jalen Ramsey, who may have played his final game for Jacksonville, Minshew and a second stellar defensive outing in five days captured the spotlight.

He found James O’Shaughnessy wide open for a 7-yard score, which came one play after Adoree’ Jackson’s muffed punt.

Minshew was more precise with a 22-yard touchdown pass to DJ Chark, who was blanketed by Malcolm Butler. 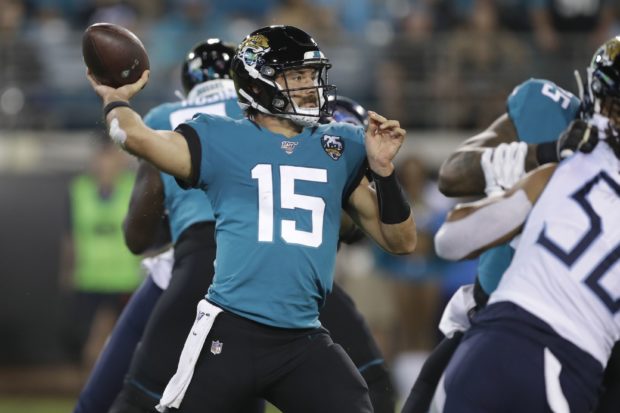 Marcus Mariota got no style points in this one.

“You saw what the D-line did,” Ramsey said, declining to talk about his potential trade.

“Today was their day.

Everybody got a piece of it.

I was excited to see those guys have a huge game.”

The Jaguars played well enough to win at Houston last week, especially on the defensive side, but came up inches short on a 2-point conversion and lost 13-12.

Ramsey then gut-punched a franchise already reeling from the loss of Foles by requesting a trade hours after the loss to the Texans.

He asked to get out following his sideline confrontation with coach Doug Marrone.

Ramsey later insisted he didn’t want to be a distraction.

He wasn’t, at least not on the field.

The Jaguars enjoyed a 14-point lead in the first quarter for the first time since Week 2 of last season against New England and just the third time in the last five seasons.

Ramsey hugged several teammates after the game but didn’t say any goodbyes in the locker room. 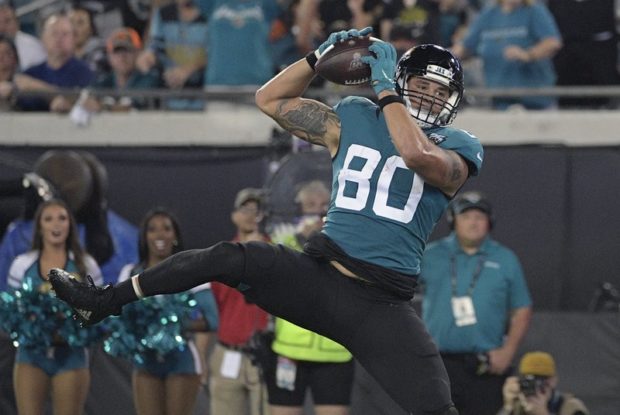 “He didn’t have to say anything,” Jones said.

“He may be going to another team, but no one’s going to be hurt by that.

The Titans (1-2) struggled to play from behind.

With his team trailing 14-0 early in the third, coach Mike Vrabel passed on a short field goal and went for it on fourth-and-6 at the 11.

Campbell abused backup guard Jamil Douglas, and Mariota had no time to get rid of the ball.

“That’s not how you want to play that football team, from behind,” Vrabel said.

“We talked about that.

This football team, you don’t want to play from behind.

They can really rush the passer.”

Tennessee finally got on the scoreboard with Derrick Henry’s 1-yard plunge early in the fourth.

Henry finished with 44 yards on 17 carries, a far cry from his last game against Jacksonville.

Henry ran for a franchise-record 238 yards and four touchdowns, including the second 99-yard run in NFL history (Tony Dorsett, 1983), in December.

Jacksonville wasn’t going to let it happen again, stacking the box and doing a much better job tackling the 247-pound back.

Even Ramsey got in a couple of shots on the 2015 Heisman Trophy winner.

The officiating was roundly ripped in the stands and around the country.

The most head-scratching flags: Titans linebacker Kamalei Correa was called for roughing the passer in the second quarter, and Tennessee cornerback Logan Ryan was penalized for pass interference after barely touching Dede Westbrook.

He followed that tweet without another one a few minutes later, saying “I’m turning off this game I can’t watch these ridiculous penalties anymore.”

Suspended Titans left tackle Taylor Lewan later added, “Wow, who would have thought that the refs would mess up so many calls?”

Jaguars linebacker Myles Jack took a knee to the helmet in the third quarter, was later ruled out and placed in the concussion protocol.

Jaguars receiver Chris Conley sprained his left ankle while blocking in the second but later returned.

Titans linebacker Rashaan Evans injured his left shoulder just before halftime, returned in the second half and then left the field again in the fourth.

Jaguars receiver Dede Westbrook dropped a would-be touchdown in the third quarter, and Jacksonville had to settle for a 40-yard field goal and a 17-0 lead.

It was Westbrook’s third drop of the night.

The Titans play at Atlanta.

The Jaguars play at Denver.