With the Minnesota Twins facing an early deficit, Nelson Cruz fixed that with one big swing. The 39-year-old designated hitter has sure had his hand in a lot of this team’s remarkable success.

Cruz hit two of Minnesota’s four home runs and matched his season-high with five RBIs, igniting another impressive power display by the Twins during an 8-5 victory on Thursday night over the Kansas City Royals to keep their American League Central lead at four games with nine games to go. 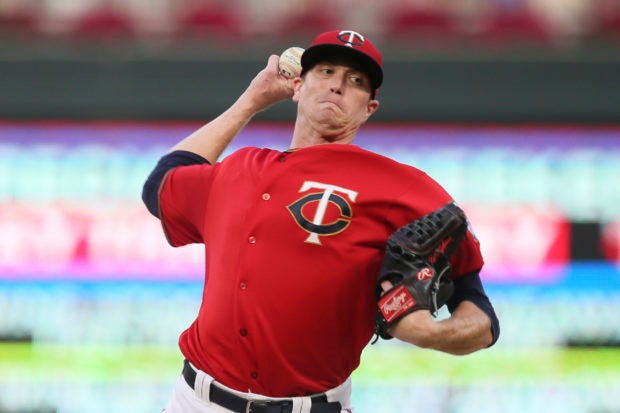 “I think everyone looks forward to every at-bat that he has,” Twins manager Rocco Baldelli said.

Miguel San homered and hit the tiebreaking RBI double in the fifth following the ejection of Royals starter Mike Montgomery, who started that inning by giving up a home run to Mitch Garver.

The Twins have 293 homers, one more than New York in the chase for the major league record set last season by the Yankees with 267.

Far more importantly in the pennant race, the Twins trimmed their magic number for clinching the division to six, meaning any combination of their wins and Cleveland losses would give them the title.

The Indians completed a three-game sweep of Detroit on Thursday.

“They’re in first place for a reason,” Montgomery said.

“They took advantage of my mistakes.” 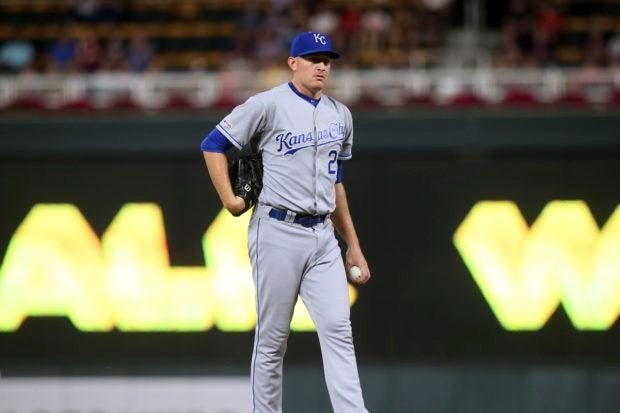 San, who reached the third deck above left field for the second time in three games, has 31 home runs, as does Garver.

Cruz pushed his team leads to 39 homers with a two-run shot in the seventh that landed halfway up the wall of junipers that make up the batter’s eye behind center field.

Cruz now has 399 career home runs, tied for 57th place on the all-time list with Andres Galarraga and Al Kaline.

“It’s definitely something that you really appreciate after the season because we’re really fighting for something bigger than that,” Cruz said.

Cruz, who has played in just 113 games due to two stints on the injured list for a strained left wrist, joined Eddie Rosario above the 100-RBI mark. The Twins haven’t had two players get there since Jason Kubel and Justin Morneau in 2009, and Josh Willingham was the last one to reach the mark in 2012.

The Twins also set their single-season club record with 885 runs and counting.

None of these feats would have been quite as prolific without Cruz, who signed for a market-bargain $14 million this year and has been equally valuable in the clubhouse as a mentor to many. 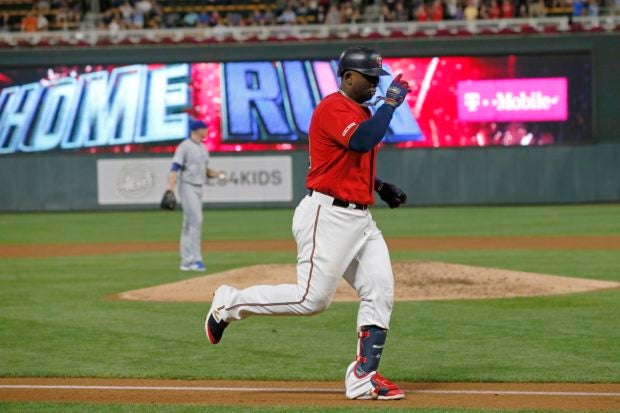 The home run derby sure bailed Twins starter Kyle Gibson out. He walked in back-to-back runs in the second inning before being removed with a 3-0 deficit.

Dealing all year with ulcerative colitis, a digestive track disease, Gibson has faltered down the stretch and put his spot in a potential postseason rotation in question.

That’s bad timing for the Twins, with the suspension of Michael Pineda for a banned diuretic, but Gibson has been able to savor what the offense has done behind him.

“You can’t possibly come back to the dugout and not enjoy what’s going on,” he said.

Lewis Thorpe (4-2), the second of six relievers, worked four innings for the win.

Taylor Rogers recorded his 28 saves with two strikeouts in a perfect ninth. 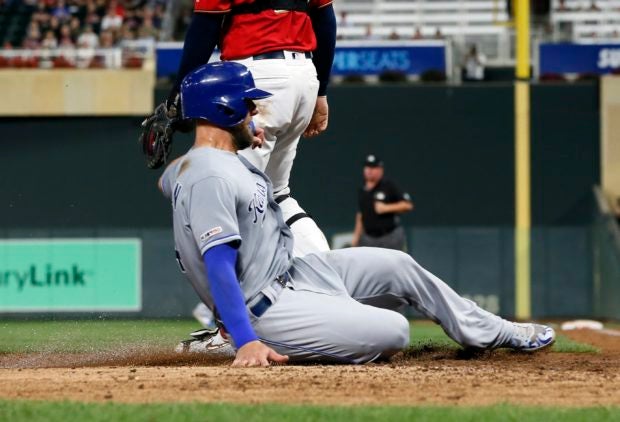 Kansas City Royals’ Alex Gordon scores on a sacrifice fly by Meibrys Viloria during the fifth inning of a baseball game against the Minnesota Twins Thursday, Sept. 19, 2019, in Minneapolis. (AP Photo/Jim Mone)

During a visit to the mound by pitching coach Cal Eldred after Garver’s home run, Gonzalez approached to urge them to wrap it up.

Montgomery complained about the strike zone to Gonzalez, who warned the left-hander before quickly giving him the heave-ho when Montgomery kept jawing at him.

He chucked the ball toward the plate on his walk off the mound and slammed his glove against the bench upon reaching the dugout.

He had a bad night.

It’s more the fact that I felt like he was intentionally doing it because I had mentioned a few things earlier in the game about some calls I thought were strikes,” said Montgomery, who was particularly irked by his 0-2 cutter in the third that was called a ball one pitch before Cruz tied the game with his three-run opposite-field drive.

Jacob Barnes (1-3) relieved Montgomery and gave up the double to San that center fielder Erick Mejia nearly caught after a long run but had popped out of his glove.

As for Montgomery, well, his mind was drifting to the bigger picture after the game about the future of umpiring altogether.

“They need to be objective, and if they can’t be, I hate to say it: We’ve got to go to automated zones,” Montgomery said.

“I’ve never been one that wants or advocated for that, but after seeing it, I think it’s definitely something that the league should consider.”

Royals: LHP Eric Skoglund (0-1, 8.36 ERA), who has taken the place of RHP Jakob Junis in the rotation, will pitch on Friday night for his first start since Aug. 30.

Junis was shut down at 175 1/3 innings as a precaution due to his season workload.

Twins: Manager Rocco Baldelli named rookie RHP Randy Dobnak (0-1, 2.12 ERA) the starter for the second game of the series, likely to be succeeded by a parade of relievers as the Twins patch together Pineda’s spot.