Pope Francis and his children

Pope Francis and his children 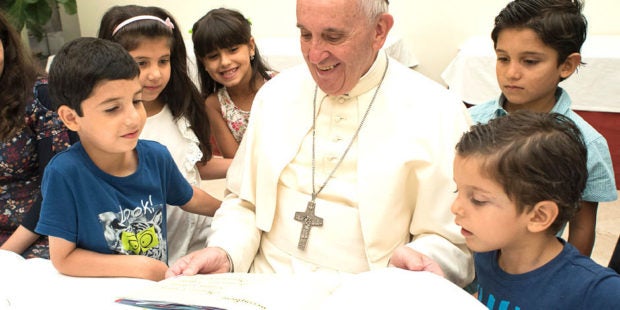 Heavily investing in them with education, arts, music, sports, and entertainment (parks and playgrounds), every civil society holds children dear, and consider them not as a burden but as the hope for the future. But not during Jesus’ time, when children had little socio-cultural value, like women, a time when a slave had no socio-cultural value at all – owned, used, and disposed whimsically.

Pope Francis, in 2015, had a jubilant encounter with the Filipino youth at UST, Manila. On stage with the Holy Father among others was Glyzelle Palomar, 12, one of the street kids exposed to adult’s problems like drugs and prostitution, who asked in Filipino: “Why does God allow this to happen?” and stopped speaking, and then cried. The Holy Father, unable to answer, feeling the sadness of Glyzelle, threw another question to the audience instead: “Why do children suffer?”

In November of 2018, a speech-impaired Argentine boy in blue jeans and a light blue sweatshirt ran around in the stage where Pope Francis was. “The boy is Argentine,” the Bishop of Rome uttered causing the crowd to smile.

“This boy is mute,” the Vicar of Christ continued, this time in a more serious tone, “but he knows how to communicate, how to express himself… He is telling us we must have the freedom children have with their father,” an analogy of every Christian’s relationship with God the Father, free and not fearful.

Also in 2018, Pope Francis hugged little Emanuele, one of the kids of St. John of the Cross parish in one of Rome’s poorest public housing projects, and asked him to whisper what was in his heart. Emanuele’s father had been an unbeliever in life, but made sure his children were baptized before he died. Young Emanuele, drowning with emotion and tearing, finally whispered to the Holy Father: “Is my dad in heaven?”

Hearing this, Pope Francis carried on with his catechesis: “What a beautiful witness of a son, who inherited his father’s strength and who had the courage to weep before us all. If that man was able to make his children like that, then it’s true, he was a good man. He was a good man.” God decides who goes to heaven, the Pontiff finally said.

In one general audience in 2o19, 10-year-old Clelia Manfellotti of Naples, clad in black leggings and a pink T-shirt, diagnosed with autism, unexpectedly appeared where the Roman Pontiff, who allowed the girl to move around undisturbed clapping and dancing on stage.

“Leave her be; leave her be,” Pope Francis his security staff, “God speaks through children,” inspiring the crowd to erupt in applause. The Vicar of Christ said, putting aside his prepared speech, “È bella, perché è bella” (literally, “she’s beautiful because she’s beautiful”)… “Poor girl, she is victim of a disease, and knows not what she does.”

The Pontiff went on to say: “I ask you one thing, and let everyone answer in his heart: ‘Seeing her, did I pray for her, that the Lord might heal her, might watch over her? Did I pray for her parents, for her family?’ Because, whenever we see someone who is suffering, we must pray.”

Witnessing Pope Francis today is like personally hearing how Jesus told His apostles: “Let the little children come to me, and do not hinder them, for the kingdom of heaven belongs to such as these” (Matthew 19:14). What our dear Lord said is both literal and symbolic, for Jesus loved kids, literally, and Jesus loved simplicity and candor (opposite of hypocrisy) as symbolized by them. Seeing Pope Francis, the Supreme Pontiff of the Universal Church, is like seeing Jesus alive.

Love your kids, invest heavily in them and, as all saints and heroes believe, we all shall have a brighter future.