Of the 31 reviews on Amazon’s United Kingdom site, 27 gave “They Don’t Teach This” a one-star rating.

The book details the discrimination Aluko faced during her England career. 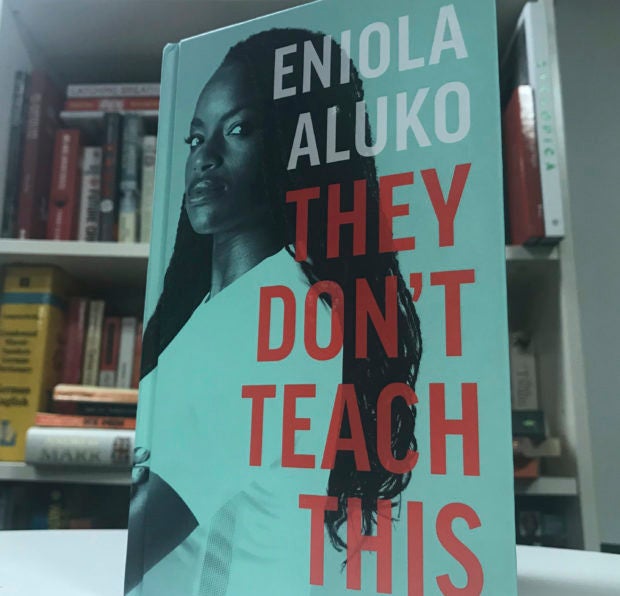 The front cover of the autobiography written by English soccer player Eniola Aluko , London, England. Friday, Sept. 13, 2019. Soccer star Eni Aluko is condemning Amazon for not removing racist reviews of her memoir posted on the online retailer’s web site. Of the 31 reviews on Amazon, 27 gave “They Don’t Teach This,” which details the discrimination Aluko faced during her England career, a one-star rating. Readers have used the platform to call the book “fiction,” “anti-white racist drivel” and accuse the Juventus forward of choosing to “play the race card” and “coming across as a racist herself.” (Rob Harris/AP)

Customers have used the platform to call the book “anti-white racist drivel” and “fiction” and accuse the Juventus forward of choosing to “play the race card” and “coming across as a racist herself.”

Aluko, who is black, and her publishers have been in contact with Amazon about the reviews, but they remain on the site.

Amazon told The Associated Press it does not suppress reviews based on star ratings but does use investigators and automated technology to prevent and detect inauthentic comments.

Aluko raised her concerns about the Amazon reviews in a column about online abuse for The Guardian, saying they were “clearly motivated by tribalism, bitterness, and hatred” and that “sometimes the law is the only solution.”

Penguin Random House, the publishers of the book, told the AP that “we’re working with our author, Eni, on this issue and are in contact with Amazon.”

The players’ union in England and anti-racism activists have denounced Amazon Criticized, whose CEO is Jeff Bezos, the world’s richest man, for not removing the posts.

“Amazon, just like social media platforms, have a responsibility to tackle any racist or discriminatory abuse on their website,” Kick It Out, English soccer’s anti-discrimination body, told the AP.

“We’re angered by the racial abuse directed at Eni Aluko just for telling her story and we fully support her as one of the leading voices in football shining a light on key issues that the game must address.”

The use of online reviews to abuse players has opened up a new front to be tackled by the Professional Footballers Association, which met recently with Twitter, Facebook, and Amazon after a spate of racist posts directed at its members.

“We have been proud of Eni for standing up against injustice in the past and we applaud her for her brave stance in this instance,” PFA head of equalities Simone Pound said. ”

As a prominent female player and role model, Eni is at the forefront of challenging abuse where and when it happens.

“We are increasingly seeing our members being abused and harassed as they are fulfilling workplace commitments both on and off the field. As a member Eni will continue to have the full support of the PFA.”

“Some of what has been written about myself and my book is defamatory,” Aluko wrote in The Guardian. “It is intended to put people off buying my book, and I intend to make sure they understand the consequences of such hatred.”

Aluko capped 102 times for England and is a lawyer.

She spent two years trying to convince the English Football Association to believe Mark Sampson as national team manager made offensive comments in 2014 about whether her relatives coming from Nigeria for a game were infected with Ebola.

Pressure from Eniola Aluko led to a new FA investigation after allegations of wrongdoing had been initially dismissed.

The FA apologized to Aluko in 2017 after a review established she and a teammate had been racially discriminated against by Sampson but that the coach was not racist.

“Accusing someone of racism isn’t something I would ever do lightly,” Aluko wrote in her book. “It certainly hasn’t been a pleasant experience.

I’m willing to bet that no one ever cried racism for fun, or for power, and yet so many people of color don’t share their experiences because they would be shouted down, in the hideous phrase, for ‘using the race card.'”

The autobiography covers identity and race issues, footballing successes that have seen Aluko win league titles with Chelsea and Juventus, and her career as a lawyer.

“I love being a black woman, I wouldn’t change it,” Aluko wrote.

“It has always been a cause for celebration and empowerment, never a crutch or an excuse.”