Facebook is tackling a new frontier: love. Facebook Dating, a matchmaking service the company already offers in Brazil, Canada, and 17 other countries, will arrive in the U.S. on Thursday. But after years of privacy missteps by the social network, will people trust it with their love lives?

For a company that’s also developing its own digital currency and dabbling in e-commerce, love is another step toward reaching into all aspects of human existence.

Although many features resemble what other matchmaking services offer, Facebook’s version promises to be different, just as Tinder did before it with its swipe action and Bumble with its female-first messaging.

Your Facebook Dating profile will be separate from your main one, but it will tap existing features such as events and groups, as well as your network of friends to identify “secret crushes.” 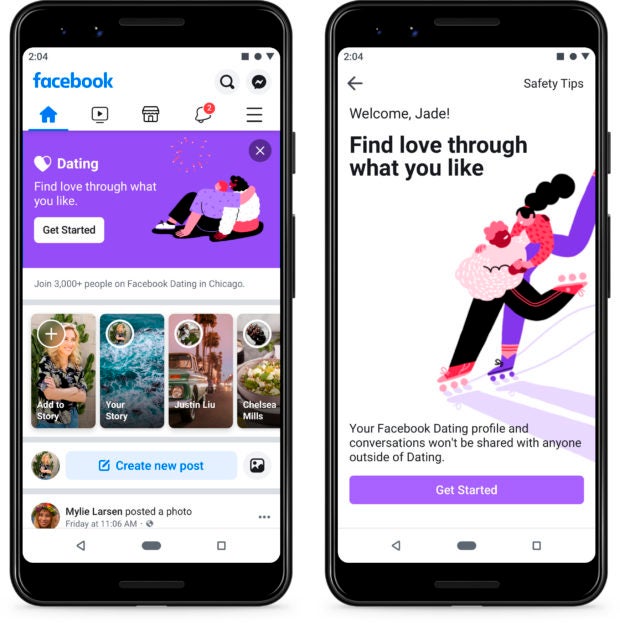 This undated product image provided by Facebook shows screenshots of Facebook Dating, a mobile-only matchmaking service. On Thursday, Sept. 5, 2019, the service will launch in the U.S. (Facebook via AP)

Facebook Dating, a mobile-only service that’s free to use and free of ads, can still help Facebook make money if it keeps people glued to its other services longer.

That’s if users can get over concerns about privacy.

“A feature on Facebook that people don’t trust isn’t going to be successful,” said Rob Sherman, the company’s deputy chief privacy officer. “We built in privacy from the ground up.”

Tell that to Seth Carter, 32, an engineer from Terre Haute, Indiana, who tried a host of dating apps ranging from Match to Bumble, Tinder, and Christian Mingle prior to his current relationship.

“Facebook is here to make money and I get that,” he said. But he worries that Facebook’s stated commitment to privacy would ultimately buckle under pressure to make money off the service.

“That likely means they’re going to sell my dating preferences, which means even more intrusions into my life.” 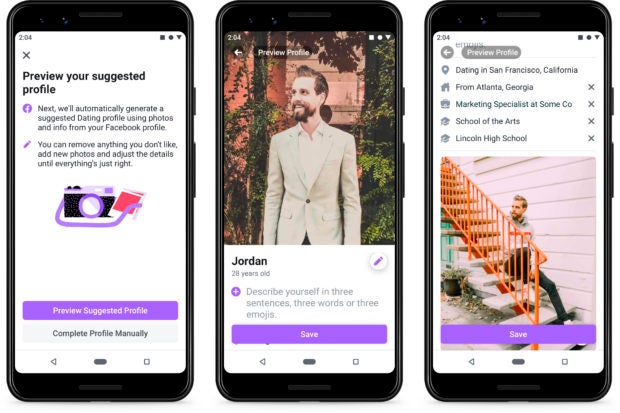 This undated product image provided by Facebook shows screenshots of Facebook Dating, a mobile-only matchmaking service. On Thursday, Sept. 5, 2019, the service will launch in the U.S. (Facebook via AP)

Facebook says it won’t be doing any of that. But users like Carter can hardly be blamed for their apprehension, given the company’s multiple stumbles over protecting people’s private information. Facebook was fined a record $5 billion this summer by the Federal Trade Commission over privacy violations. It’s also under scrutiny for allowing for the spread of election-related misinformation and discrimination in U.S. housing ads.

Facebook Dating comes as the popularity of online dating grows:

In 2016, 15% of all U.S. adults said they had used online dating services, up from virtually none in 2005, according to the Pew Research Center.

From old school sites like eHarmony to Hinge or The League, a members-only service promising to bring together folks with “ambition and a drive to succeed,” there are also apps focused on farmers, religious groups, seniors, the LGBT community and so on.

When he announced the feature last year, Facebook CEO Mark Zuckerberg said Facebook Dating is “not just for hookups” but to build “meaningful, long-term relationships.

” That appeared to be a direct swipe at Tinder, a service best known for hooking people up with people they find attractive by showing their photo, age, and first name.

When you see a suggested match, you “like” someone by tapping a heart icon, or tap “X” to dislike. There’s no Tinder-like swipe.

Your dating profile also won’t show up on your newsfeed or be visible to friends; it’s only for others using the dating service.

Facebook insists it won’t use information gleaned from your dating profiles for advertising and says there won’t be ads on Facebook Dating.

Dating lets you message someone just once unless you get a response. Facebook also won’t allow lonely hearts â€” or creeps â€” to send photos or website links, which could help cut down on unsolicited body-part photos.

There were initial rumblings that the dating feature might be open only to people who list themselves as “single” and not those who are “married” or “in a relationship.”

But Facebook has said this is not the case. After all, people often don’t keep their relationship status up to date or don’t use it in a serious way (in a complicated relationship with pizza, anyone?).

To help you meet offline and share interests, the service will also push other Facebook features, such as events and groups. For instance, if you and a match are both going to a concert, you can make plans to meet up there. (These options require you to intentionally activate them.)

You can also share your location with friends while on a date, a feature Facebook says has been popular in Colombia and Thailand.

Harbor hidden passions for your existing Facebook Friends with Benefits? You can pick up to nine as a “secret crush.” You’ll both be notified if your crush is also on Facebook Dating and has likewise picked you. Otherwise, Facebook says, the crush remains secret.

But based on Facebook’s history with users’ private information, there’s certainly a possibility that it won’t, so prepare to be embarrassed with Friends with Benefits.