Immigrant who finds joy in giving will get Presidential award

Immigrant who finds joy in giving will get Presidential award 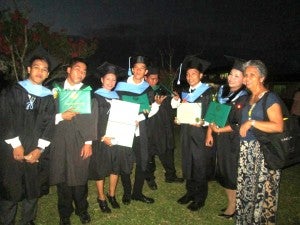 Marina Robledo Sulse (right), originally from Taft, Eastern Samar and now a resident of Manhattan, New York, with some of her graduating scholars. CONTRIBUTED

CEDAR KNOLLS, New Jersey — For their significant contributions to the Filipino people in the Philippines and abroad, 23 overseas Filipinos and foreign-based organizations will receive the 2016 Presidential Awards for Filipino Individuals and Organizations Overseas from President Rodrigo Duterte on Dec. 19.

Marina is a widow who raised her two children alone and had more than her fair share of hardships. What sets her story apart, however, is Marina’s passion to help others, even if it means depriving herself of even the simplest pleasures in life. Her exemplary passion still mystifies us, her relatives.

In the early ‘90s, Marina and her very young children, Sofia and Omar, left for the United States. Omar recalls that he thought they were just visiting Disneyland, and he did not have any idea that they were resettling in New Jersey.

The years that followed were far from easy. Marina, who did not have any working papers at the time, had to juggle between whatever menial job was available and raising her two children. She had to commute between New York, where there were job opportunities, and New Jersey, where Sofia and Omar where staying with relatives and were going to school. The family eventually moved to Manhattan. 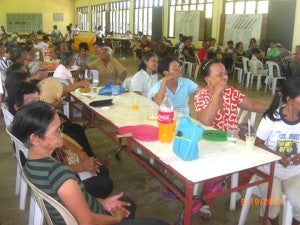 During a vacation in 2000, Marina learned from her sister, Pascuala, that there were senior students in the local high school who could not join the graduation ceremony due to unsettled accounts. Marina readily offered to pay the fees, and after further conversation with Pascuala, she decided to pay the college tuition of ten graduating high school students.

Her decision that day commenced a life mission. And 16 years later, Marina has helped hundreds of college students and their families. She also holds a free annual summer camp for hundreds of less privileged children in Taft and sponsors a yearly fellowship for senior citizens in the community.

Taft is a small laid-back town, so it was not surprising that the story of Marina’s benevolence spread quickly within the community. In 2004, Marina was back for a vacation and met several parents who sought financial help for their children’s college education. Again, Marina could not refuse.

She recalls that she could not find the courage to turn away the parents who pleaded for help. It was only when she returned to Manila, on her way back to New York, that she realized the magnitude of the responsibilities she just assumed, for she had committed to shoulder the tuition fees of 20 new college students that year, in addition to her current scholars of approximately 30 students at that time.

Marina was overwhelmed and she remembers talking to her brother, Gil, for advice, and who told her, “God will not give you what you cannot handle.” Marina prayed hard for God’s guidance and eventually decided to keep the additional 20 scholars.

Sweat and blood money for her scholars

When Marina started her scholarships, she was working as a baby-sitter in New York, and at times as caregiver for adults. One of the adults she cared for was a Ms. Lauer who gave her taxi money from the train station to her home. Instead of taking the taxi, Marina would just walk to Ms. Lauer’s home to save the $80 per month taxi money, which she used to help defray for the scholarships back home. 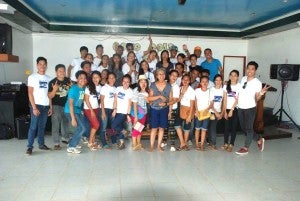 When reminiscing those days, Marina cannot imagine how she endured her walks during the winter season. According to her, all she thought then was the little taxi money she saved would be able to help one’s future.

In the late ‘90s Marina was hit by a car while protecting the toddler she was caring for as they crossed a street in New York. She was knocked unconscious, and her left leg was badly hurt. During her testimony in court in 2003, she testified of the pain in knowing that she would no longer have the physical agility to spend with her future grandchildren. She also described the physical nature of her work, including her routine walk to Mrs. Lauer’s home.

Marina won her case, and the jury’s award included compensation for pain and suffering. From this award, and after deep contemplation, Marina decided to purchase a townhouse in Metro Manila in 2004 that she subsequently leased out. She committed the rent collected from the townhouse and from another property she long had owned for her scholars. Her decision to purchase the townhouse enabled her to accept the new twenty scholars that year.

Marina is now 68 years old, and has long retired from work. She no longer has the stamina to babysit or to care for another adult. She tried to keep busy herself by helping with her two granddaughters, Malaya and Serena, while collecting items she could send to the Philippines.

Without any definite source of income, many of us thought that she would finally give up her life’s passion. After all, she already helped a lot of families back home. But we were wrong. She kept on taking scholars every year, and added two more programs — the annual summer camp and seniors’ fellowship.

She remains true to her word that the income from her properties in the Philippines will all be spent for her scholars. At present, she pays approximately Php300,000 every year to the two campuses of the Eastern Samar State University (ESSU) for the tuition fees of the Sulse Foundation scholars. She also has continued to provide subsidy for the tuition fees of some students enrolled outside the ESSU system, and others received financial help when they reviewed for their board exams.

With a very minimal pension and bills to still pay, has Marina kept an even simpler lifestyle in retirement. She volunteers at a food pantry and is able to bring home some free groceries for her daily needs. When buying necessities and fruits, she always chooses items on sale to save money. She abhors malls and shopping and prefers to buy bargain items at the Salvation Army; and they are not even for herself but for her scholars, the children at the summer camp and for the seniors. At times we find it silly that Marina would collect empty bottles during parties for the five-cent redemption. For her, every little sacrifice could mean a better future for another soul.

Inspired others to help

In 200, Marina started an annual summer camp for hundreds of children in Taft. The children who usually come in three batches are fed and bathed for days, at no cost. Her sister, Corazon, and her scholars, help her with games and other activities that include promoting self-esteem and hygiene.

For the past couple of years, Marina has been sponsoring a day of fellowship for seniors in Taft. When asked what inspired her to start the activity, she recalls the day when she met a friend of her mother. According to Marina, her mother’s friend was in tears and told her how happy she was that Marina spent some time talking to her as she seldom had anyone to talk to. Since then, Marina has sponsored the annual fellowship where seniors are treated to a simple feast, dancing, singing and parlor games. 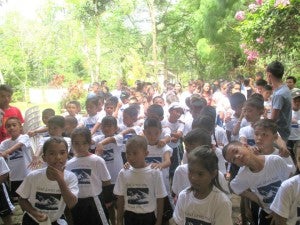 Marina’s story inspired others to help. She has relatives in California who collect empty bottles in exchange for some pennies that they eventually send to Marina. She has a niece who has foregone her family’s weekly pizza dinner to save a few bucks so they can help Marina’s projects. Her co-tenants in the building share whatever item they no longer use that Marina can send to the Philippines.

The ups and downs

When asked if she has had some challenges or frustrations, Marina admitted she has had some, but she does not dwell on them. She recalls the time she tried to register her foundation at the SEC, but was unable to do so because she could not come up with the required bank deposit for the registration of a non-profit organization. But it did not deter her resolve to continue helping others. For Marina, it is always a matter of perspective. She believes that there is always a positive side in every challenge that we encounter. Just like when she was hit by a car, she transformed her pain to helping others, instead of sulking in agony.

She relishes the laughter of the children and their transformation during the few days that they spend at the summer camp. She finds happiness in listening to stories about the joy of several families and in knowing that she is able to lead her scholars to a path of a better future, like the story of a scholar who became a seaman and was able to help his family redeem their mortgaged farmland, or when her scholars are able to send their siblings to college. She finds contentment watching her fellow seniors spend a day of fun and camaraderie. Her greatest treasures are the pictures and videos of the activities that she tirelessly watches over and over again, until it is time for her to travel again to Taft.

Does she ask anything back in return for all she does? Not a thing, although she encourages her scholars to help others when they have the opportunity.

If you find Marina’s generosity puzzling, she will give you a hearty smile and her simple explanation, “I find joy in giving.”

Eubert Marc T. Hilario, Esq., is a member of the New York and Philippine Bars. His family has their own charitable project, and they collect soccer uniforms and equipment that are sent to the Philippines for the Annual Taft-Morris Soccer Cup. He can be reached at [email protected]