The gunman in a West Texas rampage “was on a long spiral of going down” and had been fired from his oil services job the morning he killed seven people, calling 911 both before and after the shooting began, authorities said.

Officers killed 36-year-old Seth Aaron Ator on Saturday outside a busy Odessa movie theater after a spate of violence that spanned 10 miles (16 kilometers), injuring around two dozen people in addition to the dead.

FBI special agent Christopher Combs said Monday that Ator called the agency’s tip line as well as local police dispatch on Saturday after being fired from Journey Oilfield Services, making “rambling statements about some of the atrocities that he felt that he had gone through.” 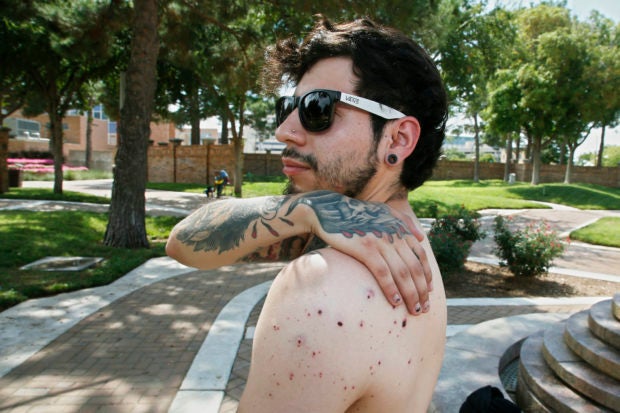 Daniel Munoz reaches for his injured back during an interview, Sunday, Sept. 1, 2019, in Odessa, Texas. Munoz was injured in Saturday’s shooting. The tattoo on his right hand is a biblical reference, that the wages of sin are death and God’s gift is everlasting life. (AP Photo/Sue Ogrocki)

“He was on a long spiral of going down,” Combs said. “He didn’t wake up Saturday morning and walk into his company and then it happened. He went to that company in trouble.”

Fifteen minutes after the call to the FBI, Combs said, a Texas state trooper unaware of the calls to authorities tried pulling over Ator for failing to signal a lane change.

That was when Ator pointed an AR-style rifle toward the rear window of his car and fired on the trooper, starting a terrifying police chase as Ator sprayed bullets into passing cars, shopping plazas and killed a U.S. Postal Service employee while hijacking her mail truck.

Combs said Ator “showed up to work enraged” but did not point to any specific source of his anger.

Ator’s home on the outskirts of Odessa was a corrugated metal shack along a dirt road surrounded by trailers, mobile homes, and oil pump jacks. On Monday, a green car without a rear windshield was parked out front, the entire residence cordoned off by police tape. 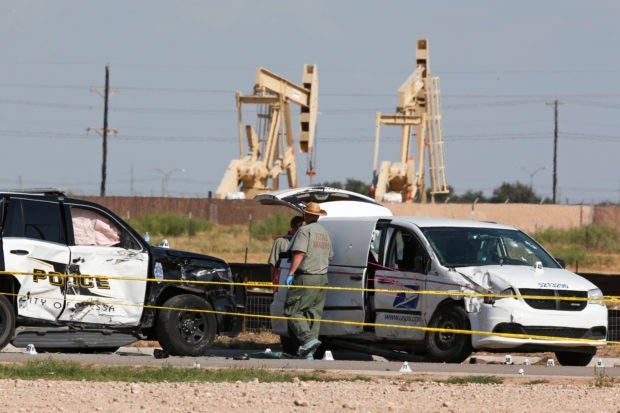 Combs described it as a “strange residence” that reflected “what his mental state was going into this.

” Combs said he did not know whether Ator had been diagnosed with any prior mental health problems.

A neighbor, Rocio Gutierrez, told The Associated Press that Ator was “a violent, aggressive person” that would shoot at animals, mostly rabbits, at all hours of the night

“We were afraid of him because you could tell what kind of person he was just by looking at him,” Gutierrez said. “He was not nice, he was not friendly, he was not polite.” 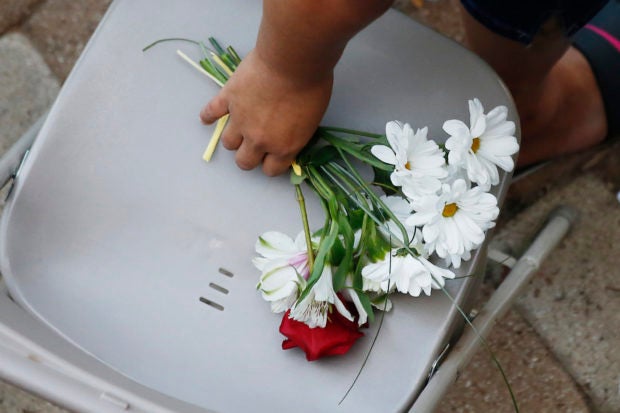 The daylight attack over the Labor Day holiday weekend came just weeks after another mass shooting killed 22 people in the Texas border city of El Paso.

Authorities have not said how Ator obtained the gun used in the shooting, but Ator had previously failed a federal background check for a firearm, said John Wester, an agent with the federal Bureau of Alcohol, Tobacco, and Firearms. Wester did not say when Ator failed the background check or why.

Online court records show Ator was arrested in 2001 for a misdemeanor offense that would not have prevented him from legally purchasing firearms in Texas. Federal law defines nine categories that would legally prevent a person from owning a gun, which includes being convicted of a felony, a misdemeanor domestic violence charge, being adjudicated as a “mental defect” or committed to a mental institution, the subject of a restraining order or have an active warrant. Authorities have said Ator had no active warrants at the time of the shooting.

Texas Gov. Greg Abbott tweeted Monday that “we must keep guns out of criminals’ hands” words similar to his remarks that followed the El Paso shooting on Aug. 3, when he said firearms must be kept from “deranged killers.” But Abbott, a Republican and avid gun-rights supporter, has been noncommittal about tightening Texas gun laws. 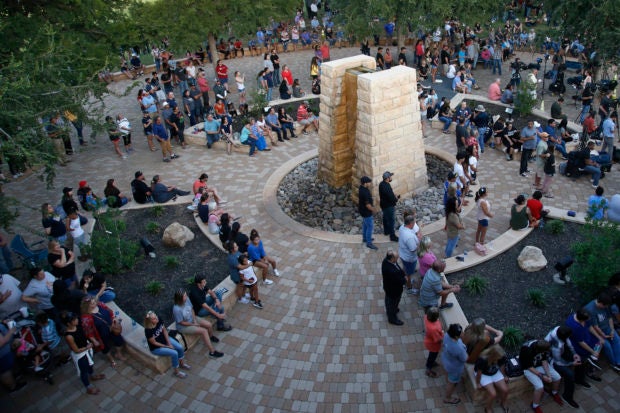 People attend a memorial service for the victims of a shooting spree the day before, Sunday, Sept. 1, 2019, in Odessa, Texas. (AP Photo/Sue Ogrocki)

Abbott tweeted that Ator didn’t go through a background check for the weapon he used in Odessa.

He did not elaborate, and a spokesman referred questions to the Texas Department of Public Safety, which didn’t immediately respond for comment.

Odessa Police Chief Michael Gerke said Ator’s company also called 911 on Saturday after Ator was fired but that Ator had already taken off by the time police showed up.

“Basically, they were complaining about each other because they had a disagreement over the firing,” Gerke said. 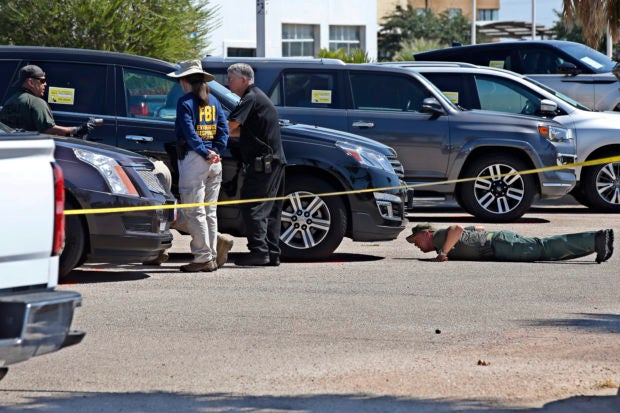 Gerke said he believes Ator had also been recently fired from a different job but did not have any details.

Authorities said they remain unable to provide an exact timeline of the shooting, including how much time passed between the traffic stop at 3:13 p.m. and police killing Ator at the movie theater.

Odessa officials Monday released the names of those killed, who were between 15 and 57 years old. Among the dead were Edwin Peregrino, 25, who ran out of his parents’ home to see what the commotion was.

Mail carrier Mary Granados, 29, slain in her U.S. Postal Service truck; and 15-year-old high school student Leilah Hernandez, who was walking out of an auto dealership. 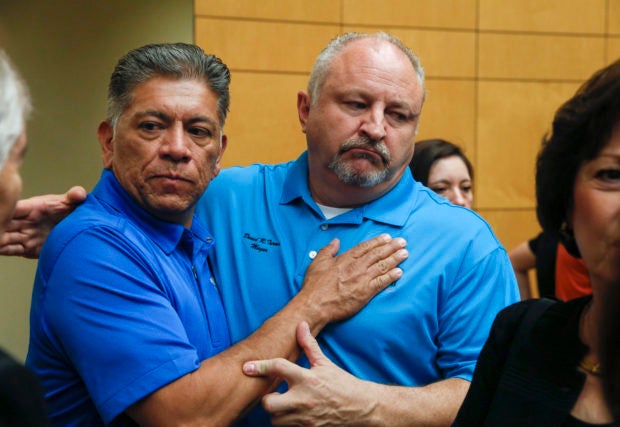 The Legalization of Sports Betting in Many States Hinges on Tribes

Ator fired at random as he drove in the area of Odessa and Midland, two cities more than 300 miles (482 kilometers) west of Dallas.

Police used a marked SUV to ram the mail truck outside the Cinergy Movie Theater in Odessa, disabling the vehicle. The gunman then fired at police, wounding two officers before he was killed.

Police said Ator’s arrest in 2001 was in the county where Waco is located, hundreds of miles east of Odessa. Online court records show he was charged then with misdemeanor criminal trespass and evading arrest. He entered guilty pleas in a deferred prosecution agreement where the charge was waived after he served 24 months of probation, according to records.

The weekend shooting brings the number of mass killings in the U.S. so far this year to 25, matching the number in all of 2018, according to The AP/USATODAY/Northeastern University mass murder database.

The number of people killed this year has already reached 142, surpassing the 140 people who were killed all of last year. The database tracks homicides where four or more people are killed, not including the offender. 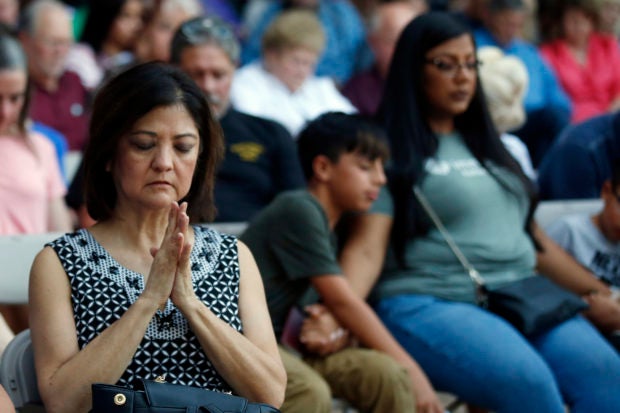 Mira Marquez, of Midland, Texas, folds her hands in prayer during a prayer service, Sunday, Sept. 1, 2019, in Odessa, Texas, for the victims of a shooting spree the day before. (AP Photo/Sue Ogrocki)