Four college students shot and wounded when a gunman opened fire into a crowd of 200 people outside a library near Clark Atlanta University and then escaped in the chaos, authorities said.

All four injured women were in stable condition after the gunfire, which happened shortly after 10:30 p.m. Tuesday. None of their injuries were life-threatening, Atlanta police said.

The shooter had not yet been apprehended Wednesday morning.

The four students were shot outside a library that serves Clark Atlanta and other nearby historically black colleges. 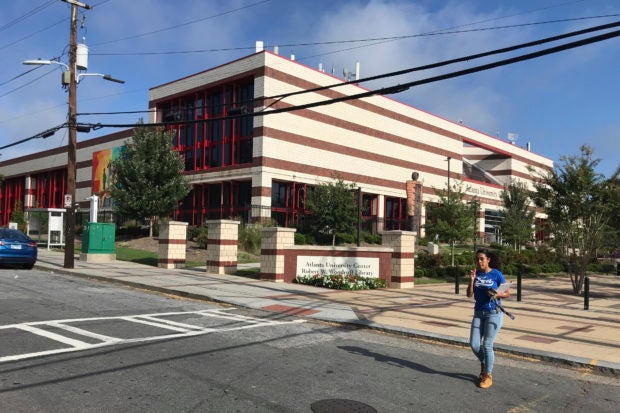 The campus of Clark Atlanta University is seen Wednesday, April 21, 2019, in Atlanta. Four college students were wounded when a gunman opened fire into a crowd of 200 people outside a library near the university, Tuesday night, and then escaped in the chaos, authorities said. (AP Photo/Jeff Martin)

The block party, held the night before the first day of classes, was celebrating the end of orientation for new students.

“Anyone can get on this campus,” sophomore Jasmine Phelps told the newspaper. 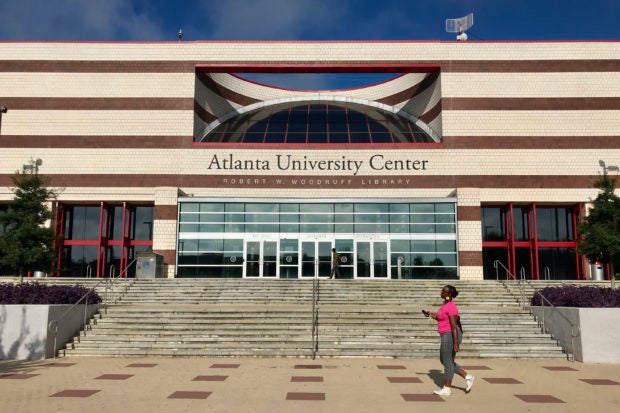 The campus of Clark Atlanta University is seen Wednesday, April 21, 2019, in Atlanta. Four college students were wounded when a gunman opened fire into a crowd of 200 people outside a library near the university, Tuesday night, and then escaped in the chaos, authorities said. (AP Photo/Jeff Martin)

On Wednesday, there was a heavy security presence on campus and in front of the library. A couple of Atlanta police officers stood on a corner across the street.

Investigators on Wednesday were checking surveillance cameras in the area, Atlanta police spokesman Carlos Campos told The Associated Press. Police weren’t prepared to say what the cameras might have captured.

The gunshots began after an argument broke out between two parties and someone opened fire, investigators said. The video aired by WXIA-TV shows dozens of students running frantically after the gunshots were heard.

“It appears there were two separate groups that were targeting each other, and these people were just caught in the crossfire,” Atlanta police Capt. William Ricker told reporters.

Clark Atlanta’s Office of Religious Life announced a prayer vigil for Wednesday evening. “Evil will not have its way on our campus,” it said on social media.

Some students Wednesday discussed the shooting among themselves as they walked past the library. Security guards did not permit interviews with the students in front of the library, which is private property.

Filipino in Colorado on 5-year intensive probation for sex offenders

“We are asking our faculty to be aware and prepared to support those students experiencing the effects of this incident, Lucille MaugÃ©, Clark Atlanta’s interim president, said in a message to students.

Atlanta police routinely work with Clark Atlanta’s police department, as they do with campus police at other schools in the city such as Georgia State University and the Georgia Institute of Technology.

“We’re always very much aware when school is open at the campuses inside the city of Atlanta and we do make a concerted effort to work closely with the campus police and make sure we properly patrol our areas,” Campos said about the Students Shot at University.