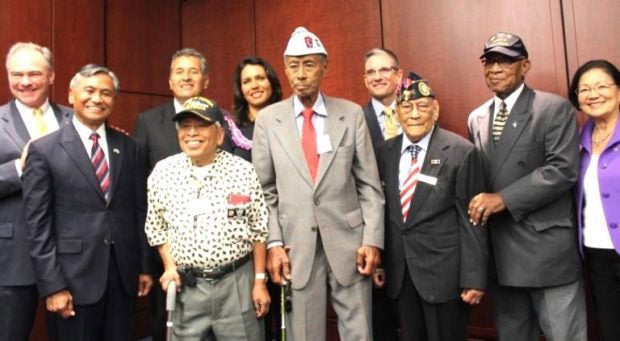 Happy Filipino veterans of World War II when their family reunification was fast-tracked by Congress. Now the Trump administration is planning to end the program. INQUIRER FILE

On August 2, 2019, the U.S. Citizenship and Immigration Services announced its plan to terminate the program or the FWVP. This program was conceived almost 3 years ago during the Obama Administration and is set to terminate in 2021. Will the announcement last week pre-terminate the program? What will happen to the families of Filipino veterans who have pending or approved FWVP?

Upon hearing the news of the  USCIS plan to terminate the FWVP, several veterans’ advocates in our community were alarmed by its adverse impact on our elderly Filipino veterans and their families.  Indeed, this FWVP was conceived by former President Obama as part of its 2015 Modernizing and Streamlining of the Immigration System. At the time, there was a mandate to allow certain families of Filipino veterans to enter the United States and the legal way to address this was to allow the families on urgent humanitarian reason or significant public benefit.

The FWVP program since its inception has allowed veterans and their widows to live with their families on parole status. After serving under the U.S. flag during World War II without their sacrifices recognized and their benefits granted, the elderly veterans sought to have family unity during their twilight years. Through the FWVP,  sons and daughters of veterans were able to provide the much needed care for their aging parents.

No Immediate Termination of the FWVP Until Further Notice

The latest announcement of the USCIS as it is published indicates that this is a “plan” much like the announcement made a couple of months ago that ICE planned to conduct  “mass raids of millions of undocumented.” What this means is that there is no immediate termination of the FWVP, so all those who are on parole status under the FWVP must not fear having to immediately leave the U.S. at the expense of abandoning their elderly veterans or veterans’ widow.

Put in the context of the DACA rescission in 2017, a change in policy may not take place immediately without violating constitutional due process. Lawsuits are still pending on DACA rescission and DACA recipients continue to receive their employment authorization document.

So unlike the rescission of the DACA program, the USCIS clearly indicated that it will allow the current FWVP parole beneficiaries to maintain their current period of parole through expiration. Also, those who have pending FWVP requests with the USCIS will be processed to completion.

There is no mention in the announcement that renewals or new applications may be filed. Until and unless there is a clear guidance on how renewals or new applications are processed, USCIS at its discretion should consider adjudicating these applications. At the very least, if these are not processed under FWVP, they may be filed and classified as “non-categorical” or the general grant of humanitarian parole, which may not have the same ease of USCIS approval compared with those filed under a categorical parole such as the FWVP.

The FWVP was intended for our Filipino World War II veterans, but based on our experiences at the Bayanihan Equity Center (f.k.a. Veterans Equity Center), hundreds of veterans had passed away before they were able to benefit from this program. With very few of them alive, why deprive them of the benefit of being reunited with their families? As a community, we have to continue to uphold our heroes’ dignity and not cut them down of their much needed family support.

(Atty. Lourdes S. Tancinco is veterans advocate, an immigration attorney based in San Francisco CA. She may be reached at [email protected], www.tancinco.com, facebook/tancincolaw, or at 1-888-930-0808)

MORE STORIES
Trump reverses on foreign student deportation rule
Tips to protect kids during a Covid -19 outbreak
First-ever papal visit to PH – a saintly heart for the poor
Don't miss out on the latest news and information.

LATEST
Metro Manila stays under GCQ until July 31
Bayan repeats call for Duque’s resignation: Why is Duterte keeping him?
After talking tough vs China, US conducts freedom of navigation operation in Spratlys
3 added to Davao Region COVID-19 death toll as 25 new cases listed
Woman’s search for herbs turns scary after snake bites her
MOST READ
usa Kellyanne’s part-Filipina daughter, 15, scorches Trump
usa Filipino bus rider in Vancouver told to ‘speak English here’
usa Filipino in NY kills own mother, a Covid survivor
usa Why leaders who terrorize people need ‘anti-terrorism’ laws
usa Police in So. California arrest woman who harassed Asians
usa Hundreds of Filipinos at risk in California have yet to be tested – survey
usa Anti-Terror Act is itself an act of terror