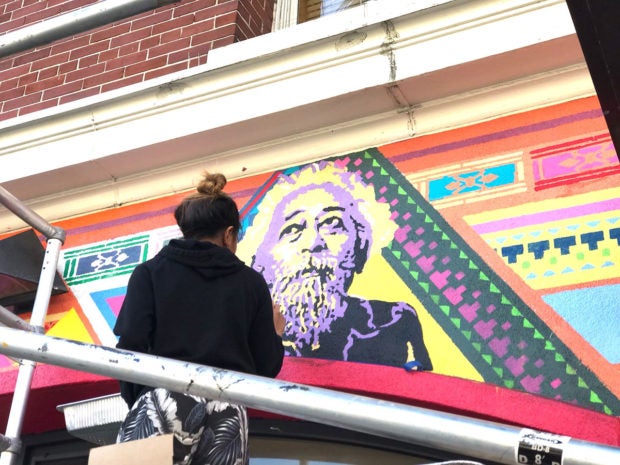 A community artist paints a portrait of poet Al Robles on facade of the Bayanihan Community Center in San Franciso. CONTRIBUTED

SAN FRANCISCO – A new mural on the façade of the Bayanihan Community Center celebrating Filipino American heroes and community leaders was unveiled on July 13, 2019, the 15th death anniversary of the center’s founder, Dr. Mario Borja.

Known as Heroes in Our Windows, the mural is a joint project of the Filipino American Development Foundation (FADF) and the South of Market Community Action Network (SOMCAN).

Facilitated by Lian Ladia, SOMCAN community engagement organizer, the project comprises a series of workshops that culminated with the painting of the mural. “It was a tedious community planning process with different groups, organizations, and community members,” says Ladia. 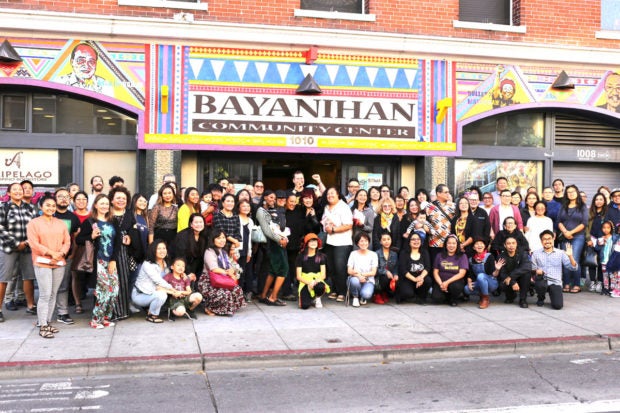 Community members and family members of featured heroes at-the unveiling of the mural in front of the Bayanihan Community-Center. ANTHONY BONGCO

The project is part of the effort to generate community empowerment and ownership in SOMA Pilipinas, the Filipino Cultural Heritage District.

“Part of SOMCAN’s work is around community planning and looking at how do we not only fight or find ways to slow down gentrification and displacement but also build community empowerment and ownership of our space,” says SOMCAN organizational director, Angelica Cabande.

The mural honors of eight leaders of the community, selected through a voting process within the SoMa Filipino community, whose legacies helped build what is now SOMA Pilipinas: Artists and volunteers take a break from mural painting. CONTRIBUTED

According to community historian MC Canlas, there were two requirements for the selection: first, “they should be dead” and second, “they had considerable contribution in the development of SOMA Pilipinas as a community and also connection to Filipino history.”

The heroes featured in the mural were mentors and inspirations to many of the current leaders in the community who continue their legacy. They collectively exemplify the spirit of bayanihan, a traditional Filipino custom of communal unity, work, and cooperation to achieve a particular goal.

“When we do bayanihan, we all collaborate together to do a project. And what’s memorialized [is] bayanihan through time. Maybe these people didn’t work directly with each other but they contributed something to our community to make it what it is today,” says FADF and Bayanihan Community Center director, Bernadette Borja Sy.

“The other piece that is important is that, for many people today that are alive, it wasn’t that long ago that some of these people were alive. So, it’s a way to memorialize what they stood for and for others to follow in their footsteps or to continue what they started. It helps to keep this spirit of bayanihan going.”

“These are your modern-day heroes. These are the people who have been able to work in the community, has a community presence in the South of Market, inspired community workers such as myself, and they need to be celebrated because they are not those distant past heroes. They remain, they were, they always will be our everyday heroes in the 21st century,” says Bayanihan Equity Center’s executive director, Luisa Antonio.

In choosing the lead artists, Mel Vera Cruz and England Hidalgo, for the project, Ladia says that they “looked into particular artists” who they “felt had a good relationship” with the organizations and community in SOMA Pilipinas.

“Mel and England had a local sense of what the Filipino American community is, [that] they regularly participate in. So, we decided to collaborate with them,” says Ladia.

The project, which took four months to complete, began with the Bayanihan Saturday Artist Workshops led by Vera Cruz and Hidalgo. It was in these workshop sessions that participants and organizers determined who would be featured in the mural including its design.

Representatives and volunteers consisting of artists, activists, cultural workers, youth, and seniors came together on successive Saturdays to lend their time and skills in the creation of the mural. “In this way, Heroes in Our Windows functions not just as a historical tribute, but as a living document of a people, and a testament to their love for their neighborhood.”

“I did the overall design, but it’s a combination of many ideas,” says Vera Cruz. “And it’s the same with the execution since everyone is involved. So, it’s not just me and England anymore.”

The creation of the mural was process of learning and empowerment for the participating community members.

“When we think about art and design, we don’t just think about it as a platform for a singular artist, we can also think about its power when it comes to building a community,” says Ladia.

“Art is one way we can show our own culture and our history. In a way, when we were doing this mural, we were also learning the history and why we’re choosing those heroes. Knowing their history and putting them on our community is empowering,” says community artist and workshop participant, Ramon Abad.

The process included the creation of stencils that were used for the patterns as well as the portraits of the heroes in the mural. Community members were allowed to make their own aesthetic choices in the painting of the mural. “I let them decide, ‘what color do you want? What stencil are you gonna use on this part?” says Hidalgo.

“They didn’t tell us, ‘that specific thing goes there,’ they were just like, ‘what do you think looks nice? Put the color you think looks nice,’ and it felt like, ‘Oh wow, I have a choice,’” says community artist and workshop participant, Malaya Redondiez.

“You can feel the word community and it feels good. You can get involved and there’s no person who’s like ‘you need to do this, you need to do that…’ You can do what you want, because you’re a member of the community,” says, community artist and workshop participant, Kaitlyn Evangelista.

The mural is a testament to how the Filipino community had united in claiming and creating its rightful place out of its hundred-year history in the SoMa.

“Bayanihan’s root word is bahay which is the house or the home, but then you extend that to a bayan, which is a community, and then you extend that to bayani, the protector of the community, and then expand the term [to] bayanihan, a verb, which is the act of working together. So, by putting the heroes and their contributions, how they contributed working together in this community, describes the message of bayanihan,” says Canlas.

“Those people have meant a lot to me, personally,” says Borja Sy. “I’ve advocated for more local people to be on those walls because when a researcher or a student should go to a library or look into a book, they would see that their roots were here in [the] South of Market. And there’s no reason why they themselves couldn’t do something to contribute to what was started.”

Heroes in Our Windows is the first mural created since the inception of SOMA Pilipinas geared towards community building, empowerment, and visibility.

“We’re starting in a good step, but we need to keep moving on and moving forward. I really hope that we’ll see more murals like this and more Filipino artworks around SOMA Pilipinas,” says Cabande. “Our voice should be represented and also included in how are neighborhoods are built.”