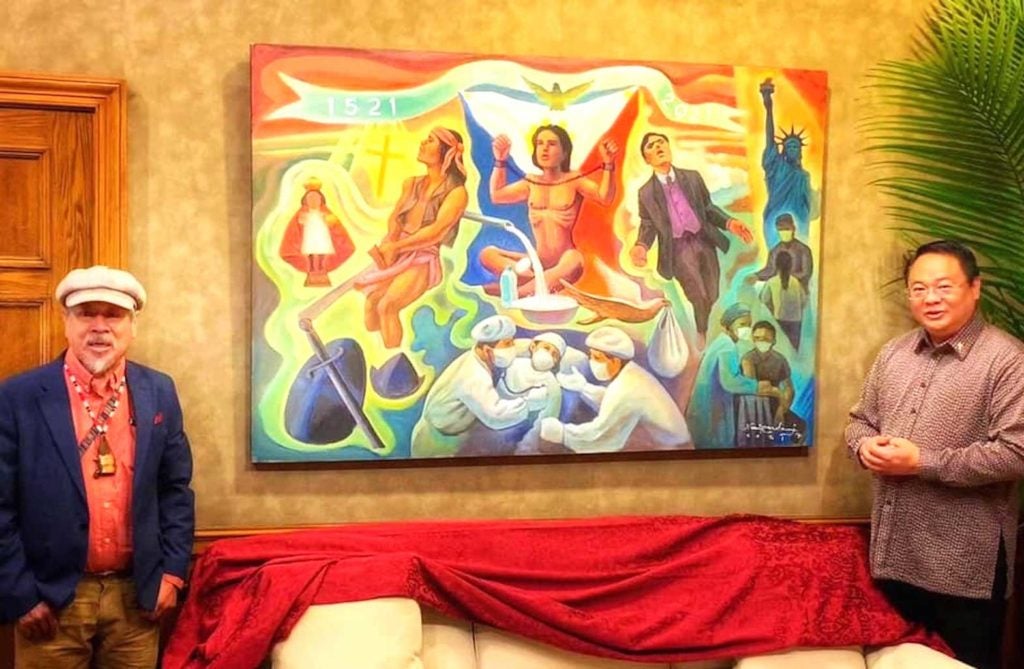 NEW YORK – When Angono’s famous artist, Nemesio “Nemi” Miranda Jr., “Father of Imaginative Figurism,” suddenly had to leave for the United States for a family emergency, a New York philanthropic group quickly hatched a plan for him to paint a mural honoring health care heroes and “500 years of national patriotism.”

The nonprofit Eagle Eye Charities Inc.,(EEC), which Miranda mentors and advises, commissioned him for a Nemiranda study based on his own pandemic series.

Dubbed as “500 Years of National Patriotism,” Nemi Miranda presented his study of Lapu-Lapu Series from 1521 with a narrative of Filipino heroes from different generations.

The sketch also showed Jose Rizal facing execution in 1898, the people represented by Juan Dela Cruz in shackles. Also shown are varying figures of front liners assisting in a hospital bed, handing of “ayuda” (assistance) and dispensing vaccine in 2021. Also depicted in the mural is 500 years of Christianity from the time Magellan landed in Mactan island of Cebu.

New York-based artists helped each other in preparing the mural with the limited time Miranda had in the city. At 6 feet by 8 the mural was prepared from stretched canvas by Art Zamora, and the transfer of the study was sketched by this writer ready for painting. Two other artists, Jojo Austria and Ronald Cortez, attended the painting interaction, on Father’s Day June 20 and on the following Monday, June 21, respectively.

Painted in front of the historic Chapel of Good Shepherd on Roosevelt Island, the mural was completed in two afternoons by the maestro without sacrificing  any details.

On Wednesday, June 23, the work was presented in a formal dinner presentation at The Players at 16 Gramercy Park South, Manhattan, attended by FilipinoAmerican philanthropists, doctors, nurses and diplomats. (A full video clip of the program can be viewed on YouTube.)

Eagle Eye Charities Inc. Trustee Dr. Romulo Aromin Jr. surprised everyone with an outstanding “Panatang Makabayan” recitation, answered by all attending Filipino Americans. EEC cited him as “Patron of the Arts and Humanities” for his unwavering support and contributions.

Miss RP 2020 Excelsa de Jesus dedicated several songs to the front liners. She was given the “Brave of Heart” citation for her volunteer activities at EEC before and during the pandemic, and herself being a Covid survivor.  Nurse Kym Villamer rendered patriotic songs during the signing of the Proclamation and dedication of the mural.

It was the first public appearance of the newly appointed Consul General of New York Elmer Cato, and the first formal gathering of community leaders and professionals since the pandemic. Ambassador Enrique Manalo, Permanent Representative of the Philippine Mission to the United Nations also witnessed the Proclamation signed by all guests, dedicating the mural art to 500 years of Filipino heroism, from the time of Lapu-Lapu in 1521 to the modern-day healthcare heroes in 2021. 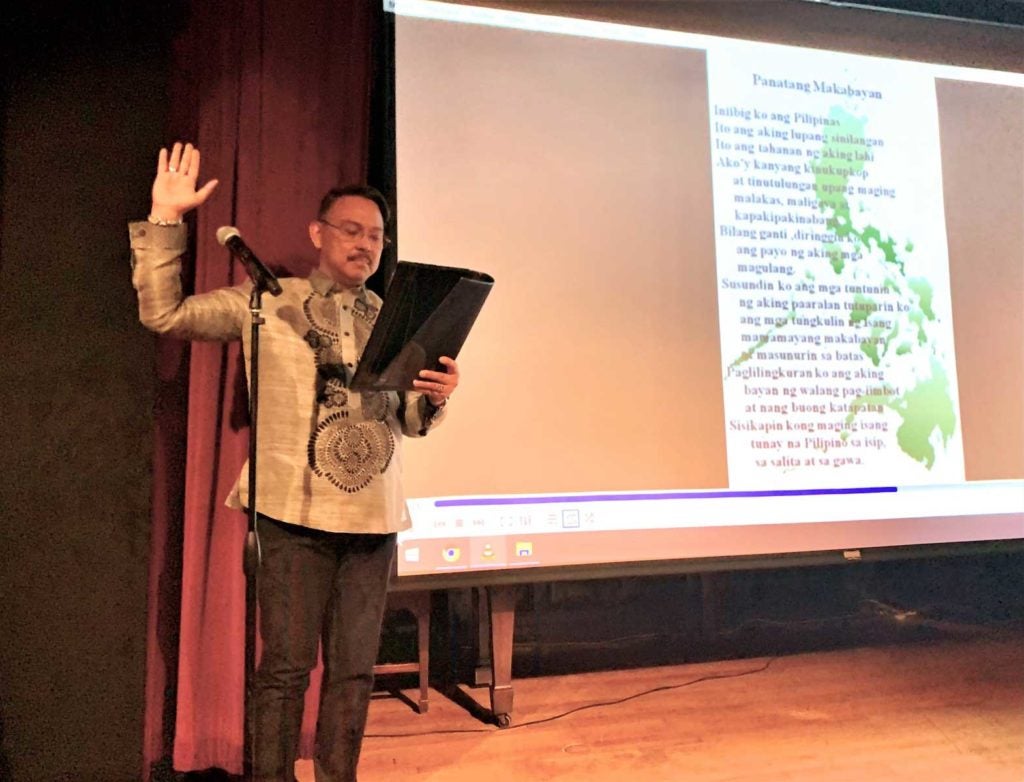 Keynote speaker Dr Leo Felix Jurado, president of Philippine Nurses Association of America, made an impassioned recollection of the days of the pandemic, what really transpired in the workplace, the harrowing sight of lifeless bodies, the fear that gripped every worker preventing them from going home to their loved ones, the dire need for medical equipment, the scenes that were all familiar in the days that followed March 2020.

Philanthropist Loida Nicolas Lewis called on all health care workers to stand up and be applauded, as she commended the organizers for their swift mobilization of distinguished community leaders to support the cause. Among the supporters are the Knights of Rizal NY Chapter, Kalusugan Coalition, philanthropists Harry and Dely Go, KInding Sindaw and individual doctors, nurses, healthcare professionals and lawyers.

New York City officials had just announced the reopening the city, which coincided with the arrival of Miranda. The Players is a historic building, a formal theatre-style dining spot dedicated to actors, playwrights, poets, journalists and supporters of the arts scene. 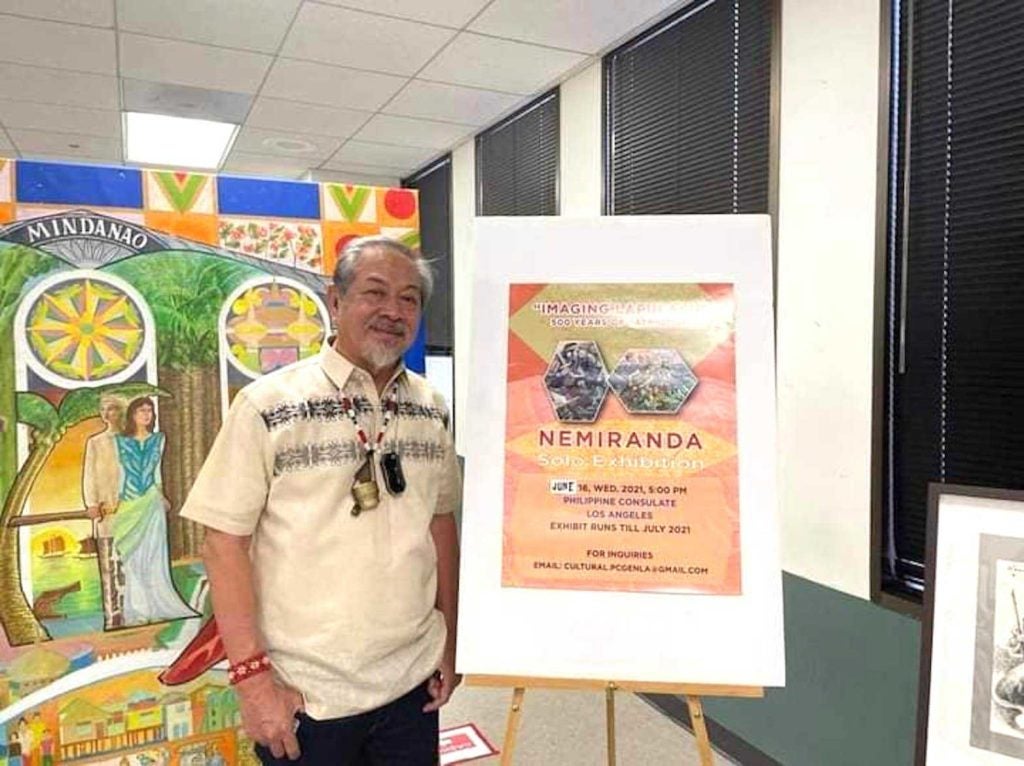 Miranda has been nominated for the 2021 National Artist for Visual Arts at the National Commission for Culture and the Arts (NCCA), Philippines. CONTRIBUTED

The day after the gala, Maestro Miranda was treated to a relaxing plein air painting session, and later, feted to a formal dinner at the Hamptons summer home of Nicolas-Lewis, where he once again, awed his audience by executing a portrait in 30 minutes.

On his last working day, Miranda attended the installation ceremony for the mural, which is safely exhibited in the Office of the Philippine Consul General Elmer Cato, open to everyday visitors from different organizations, diplomats and foreign guests visiting New York City.

Miranda is awaiting the result of his nomination for the 2021 National Artist for Visual Arts at the National Commission for Culture and the Arts (NCCA), Philippines.