‘Go back where you came from!’

‘Go back where you came from!’ 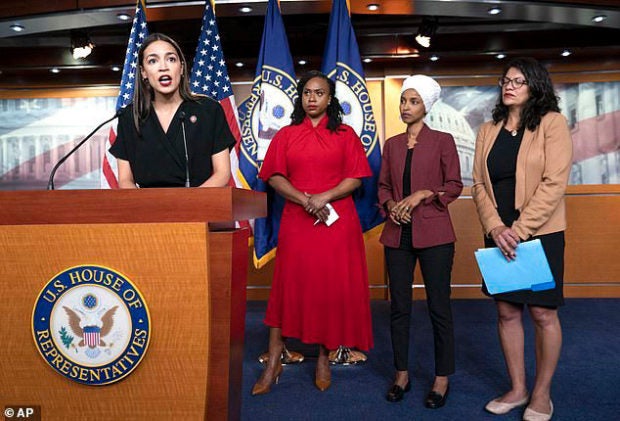 NEW YORK—First, Don the Con tells neophyte congresswomen Alexandria Ocasio-Cortez, Ilhan Omar, Ayanna Pressley, and Rashida Tlaib—all women of color—to “go back” to their “countries whose governments are a complete and total catastrophe” in order to “help fix” them. Three of the women were born in the US, while Representative Ilhan Omar of Minnesota came to the United States as a Somali refugee when she was ten, and subsequently became a naturalized citizen. Don the Racist doubles down on his vile invective even in the face of outrage, and then at a rally in North Carolina, turns the crowd into a mob in his scurrilous attack on Omar, a Muslim. Trump accused her, falsely, of glorifying Al Qaeda, and stood by for about eleven seconds as the mob chanted, “Send her back!”

Music to a white supremacist’s ears. One could almost see arms extended in the Nazi salute, and hear in the background, shouts of “Sieg Heil!”

The next day Don the Misogynist attempts to walk back his crude and repulsive behavior by kind of playing the contrite figure and claiming that he didn’t welcome such chants and “would try” the next time to head these off.

View the video yourself and see how Don the Draft Evader bathes in the hate gushing forth before he resumes speaking. Not once does he attempt to chastise the mob.

Anyone who believes Don the Fraud will mend his ways must also believe the moon is made of green cheese.

Anyone who believes that the pejorative command to “go back where you come from” is not racist is in self-denial, particularly when it comes from the mouth of a man who claimed without a shred of evidence that Barack Obama (who every single day grows in stature in comparison to the mental and moral dwarf in the Oval Office) was not born in the United States. As a candidate for president Don the Liar eventually retracted the bogus claim, though he never apologized for it.

There is not a scintilla of doubt that the current president is racist, no matter how much his Republican apologists, particularly the venal Mitch McConnell and the hypocritical Lindsey Graham, spin it.

These white men too speak with forked tongue.

So many Americans of color have had this venomous command hurled at them. I’ve experienced it and so have so many of my friends in the Asian-American community. Complementary to, though not as grievous, is the query, where are you from, followed by, No, where are you really from, as though to the questioner’s mind it were unthinkable for a nonwhite citizen to have been actually born here.

The Republican Party is a far, far cry from the party of Abraham Lincoln. Dominated by small-minded politicians it enables a president who is frightened by the diversity and the growing multiculturalism that defines contemporary America. He stokes his base’s fears of the Other with a gospel based on hate, the choir he sings to is one that excludes rather than includes. He wishes to make America not great but white again, as so many have unerringly pointed out. The complete opposite of E Pluribus Unum.

The sad thing is, there are so many brown brothers and sisters who buy into this Trumpian world, where health care becomes a privilege, not a right; where climate change is a hoax dreamed up by the Chinese; where tax breaks that benefit billionaires are good for the working and middle classes; where the environment should be exploited for profit; and where, above all, immigrants of color are undesirable.

I am willing to bet that a number of pro-Trump Filipinos in the United States legally (as citizens or green card holders) who have been confronted with that indignity remain steadfast in their blind loyalties—just as a fearful subordinate will swallow any number of indignities from the white master in order to remain where he or she is. The dutiful little brown brothers and sisters know their place. Even in “heaven” there is a hierarchy!

I suggest they imagine telling Don the Con to go back where he came from. And to imagine him scurrying back to the slime of the East River or beneath a moldy rock somewhere in Queens—a borough that, by the way, voted overwhelmingly for Hillary Clinton in 2016. Copyright L.H. Francia 2019