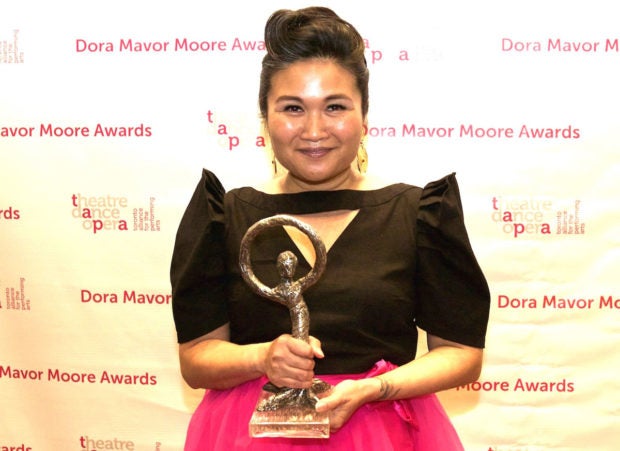 The Bindhardt-Davies Award from the Toronto Arts Foundation celebrates creative cultural leadership in the development of arts and culture in Toronto and comes with a $10,000 prize.

The Dora Award from the Toronto Alliance for the Performing Arts is for her work in directing “School Girls; or, the African Mean Girls Play” earlier this year, a coproduction by Obsidian Theatre and Nightwood Theatre.

Aquino is currently the artistic director of Factory Theatre.

Born in the Philippines, Aquino moved to Canada when she was 17 years old. After watching her older brother in a play at his high school, she thought to herself “I can do that, too.”

“I started my own path in theater as an actor at a young age. Haven’t looked back since,” she says. Aquino studied drama at University of Guelph and took up a master’s in theatre at University of Toronto.

Aquino considers winning the Bindhardt-Davies Award as a “meaningful reminder to breathe, to take everything in—accomplishments and screw-ups.

“This little pocket of time allows me to look back at my history through a different lens: one that is more forgiving, generous, open and appreciative, to recognize how far I’ve come in the journey.

“When something is said out loud, publicly recognized at a larger scale, it just makes it a little bit more real than usual. It reaffirms that I’m doing something right.”

She notes that the recognition is also a “profound reminder of how much more work there is ahead.”

“If this illuminates how passionate I am about theater and how much I believe that it can change the world…I’ll take it. It’s just really nice, and it’s precious fuel for the long road ahead.”

Aquino says that for people who work in theater, it is their “passion … this is the thing that grows us, nurtures us, transforms us.

“And whether or not we get the accolades and the recognition that we think we deserve, we will continue to do work … because we believe that theater can change the world … even if it’s just one audience member at the time.”

For both awards, Aquino went straight to rehearsals the following day after the respective ceremonies. “I suppose I celebrated my wins with more work. Which, to me, is always the best way to celebrate one’s victories.”

Even so, Aquino does not fail to highlight her appreciation for the support that she receives. “Having a village of family and friends that will have your back anytime you ask for it helps. Having a husband that doesn’t mind holding the fort when you’re not there helps. And having an astute, out-of-this-world 12-year-old child who understands and randomly texts you ‘I love you’ throughout the day helps.”

Aquino believes theater is a way of “saying something about the state of where we currently live in and how we live our lives.”

“Yes, theater can a be a place of temporary escape, a sigh of relief, a stretch of time where we can laugh and momentarily forget the harsh, cruel realities — that’s is one of its more important functions for sure: entertainment. 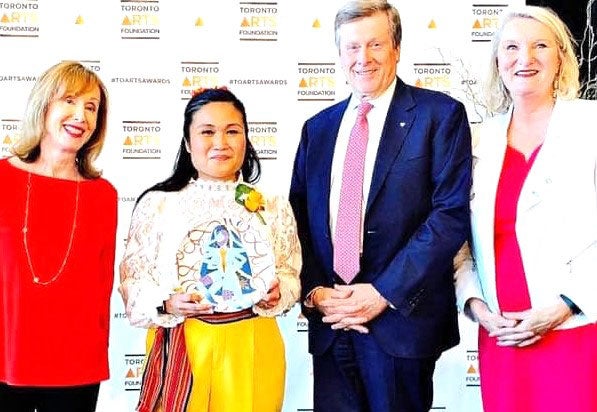 Aquino previously received a Dora Award in 2011 for her direction of “paper series” for Cahoots Theatre.

I am a Filipino

When it comes to the range of her directing output, Aquino says, “I don’t do traditional Filipino folk dances or perform indigenous tribal music or present sarsuwelas and komedyas.”

Nevertheless, she notes that some of these Filipino performance forms have actually influenced some of her well-known theatrical works.

“Some may even find my work not Filipino enough. But I am a Filipino. Look at me,” Aquino says clearly. “Whether or not I direct a show that has nothing to do with our Filipino-ness, my work is still Filipino. Period.

Aquino knows the power of theater. She recalls her own experiences working with Filipino Canadian theater company Carlos Bulosan Theatre.

“It was known as Carlos Bulosan Cultural Workshop back then. It was created in the early 1980s as a means to give voice to the anger, frustration, anxiety, pain that the Filipino Canadian community was going through at a time when they felt helpless, being far away from their home country that was going through political strife and turmoil.”

The group had been originally the cultural wing of the North America-wide Coalition Against the Marcos Dictatorship organization.

“Petitions, letters, protests were done, executed within the confines of their homes, offices and community centers. But ultimately, activism, the spirit of solidarity, the need to rise up and hope for a better future had to be shown through theater.

“This is how the community tried to save its country. A small, tiny gesture, yes, but even the smallest pebble can make the biggest ripples,” says Aquino.

“Why do I do what I do and why do I do it for the communities I serve, especially Filipino Canadians?

“To make the invisible, visible. To take on the small and big fights that exist in the larger theater community. To make sure that the list of artistic achievements that have shown us many ‘firsts’ grows into seconds and thirds and fourths.

“It’s about the work, it’s always been about the work, front and center. And our work cannot exist with you, the audience. We do this for you, for anybody who is willing to watch us, listen to what we have to say. And particularly for the Filipino Canadian theater artists, we do it for our people because we might just have something important to say about being part of it or a part from it.

“See our work. Talk about it. Love it, hate it, but talk about it with your friends. And then see our work again. And bring your mom and dad. Because when you do this, you help make the invisible—our work, our artists, us—visible.”