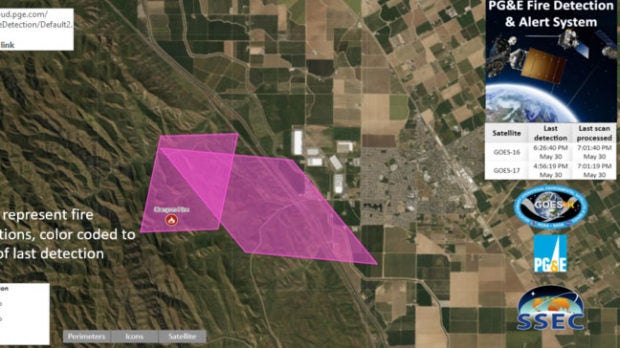 The Satellite Fire Detection and Alerting System is a state-of-the-science program that incorporates data from the two new GOES satellites, as well as three polar orbiting satellites, to provide PG&E with advanced warning 24/7 of potential new fire incidents. The satellites are operated by the United States’ National Oceanic and Atmospheric Administration (NOAA)’s National Environmental Satellite, Data, and Information Service division.

“This capability offers first-of-its-kind situational awareness by providing a live feed from the satellites to our Wildfire Safety Operations Center. Emerging technologies such as this are another way we are working to reduce wildfire risk and protect our customers and our communities,” said Sumeet Singh, Vice President of PG&E’s Community Wildfire Safety Program.

The PG&E Meteorology Team led development of the program in collaboration with experts in the satellite fire detection field from the University of Wisconsin–Madison Space Science and Engineering Center (SSEC). The system became fully operational in late June.

Working with the SSEC, PG&E developed a dedicated and proprietary data pipeline that provides fire detection data as fast as every minute. An internal web application allows staff at PG&E’s Wildfire Safety Operations Center to track fire progression as well as the intensity of fires in near real time. The system also generates new fire alerts via email and on an app. The system has already detected hundreds of fires since it began limited operation in February.

If a fire is detected from two or more satellites, such as GOES-16 and 17, then confidence is high of an actual fire in the area. In many cases this system is expected to provide an early, if not the first, indication of an incident.

The Satellite Fire Detection and Alerting System is part of the PG&E’s Community Wildfire Safety Program (CWSP). In addition to improving real-time monitoring and intelligence capabilities, other actions PG&E is taking as part of CWSP include putting in place new and enhanced safety measures and doing more over the long-term to strengthen the safety and resiliency of the electric grid to further reduce future wildfire risks. More information can be found at www.pge.com/wildfiresafety.

The utility also conducts aerial patrols during fire season, and PG&E operates a network of weather stations and high-definition cameras to improve the company’s ability to predict and respond to elevated wildfire danger.

By the end of 2019, PG&E plans to have at least 600 weather stations and 100 high-definition cameras in high fire-threat areas. These new installations are one of the many additional precautionary measures the company is implementing following the 2017 and 2018 wildfires to further reduce wildfire risks.