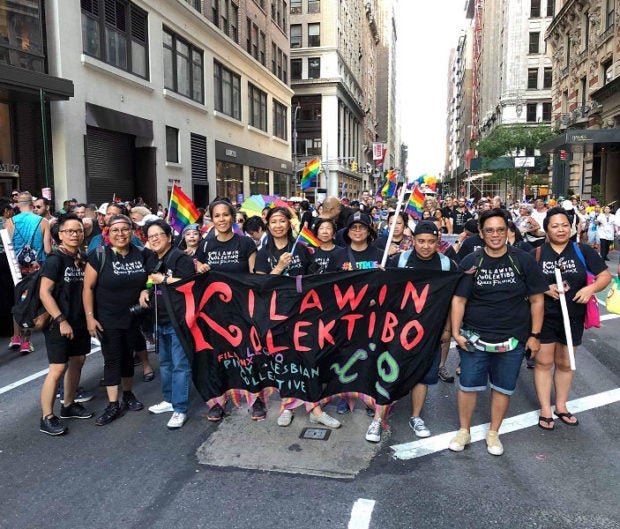 NEW YORK — Minutes before the 27th NYC Dyke March on June 29, I officiated the marriage of Teri and Tina on the steps of the New York Public Library.

Amid the dancing-in-the-street revelry of Pride March, Teri and Tina were joined in a solemn moment under the hot noonday sun.  The pair met and fell in love as young queer Filipinxs. They could not marry then because Teri, a member of Kilawin Kolektibo, was in the U.S. and Tina was in the Philippines. They reconnected after 20 years, vowing that no ocean, family or career could rip them apart.  It was, as Teri now declared, a case of “love lost and found again.”

Kilawin, a pioneering queer Filipinx activist group, was formed in 1994 in New York City. I was one of the founders. I was a young Filipinix artist at the time, very new to the city and was looking for others I could hang out with. Within months, Kilawin was born and had 12 members.  We grew to dozens more. Woefully, the group went into hiatus as members pursued personal interests and careers, went to school and raised families. The spirit of solidarity has remained steadfast.

The author as ‘Ninong Ann’ blesses the union of Teri and Tina.

As the city commemorated the 50th anniversary of the Stonewall protests in June, Kilawin was there. Members and allies came all the way from the Philippines, Canada, and other parts of the U.S. We were reunited and reenergized. It was essential for us to be part of the historic commemoration, to celebrate a half century of progress for LBGTQ rights and liberation. 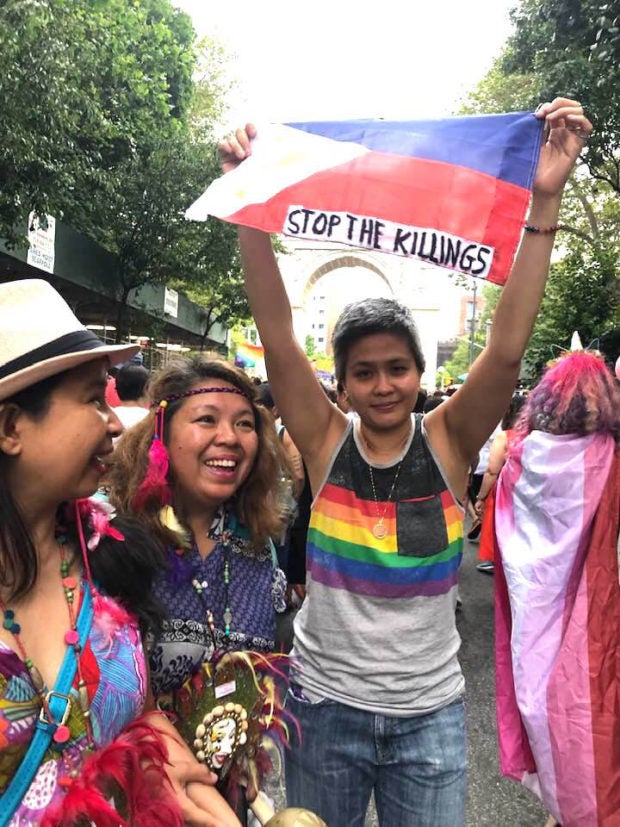 Kilawin was organized in June 1994 during the 25th anniversary remembrance of Stonewall. Organizing for Stonewall 50 took a lot of work and perseverance, and I sensed a guiding hand along the way. I felt all the energies intertwining and slowly falling into place. In participating, reconnecting and remembering, we made this historic moment a very personal one for all of us. Marching, raising fists, making herstory, we will all remember this feeling of pride in our hearts.

As we move forward, we hold the torch and pass it on to the next generation of queer Filipinx activists.

Panday Banale is the spiritual name of artist and activist Mary Ann Ubaldo. She was one of the founders of Kilawin Kolektibo, a pioneering grassroots organization whose members are mostly queer and lesbian Pinays. She is a goldsmith, a photographer, a filmmaker, as well as a Reiki and Ayurveda holistic health counselor. © The FilAm 2019