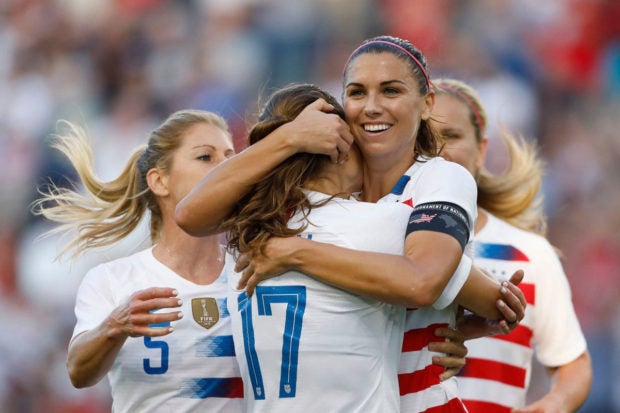 US Women’s National Team after a win. AP PHOTO

America is cheering its world football/soccer champion, the underpaid women of the U.S. Women’s National Team, with a ticker-tape parade in the bowels of Wall Street. And isn’t it funny how they are being treated like Filipinos?

Being paid a fraction of what the players on the men’s team makes. Sort of like getting pesos instead of dollars.  Had the men won, estimates are it would be worth at least $1 million dollars per player. For the women, just a few hundred thousand. Remind you of how some people are treated.

The son of a colonized Filipino knows. That’s my recurring story. I was hurtling through the heartland where the majority of the time the posted speed limit is 75-80 mph. Then my car broke down.

I’m heading to Washington, DC to do my show, “Emil Amok: All Pucked Up.” (Get your tickets here.)

I just thought replicating my father’s immigrant experience in my own country would be a good idea before I do my latest show. Kind of Stanislavskian. My dad came to the U.S. as a colonized Filipino in 1928, no green card necessary, and was subjected to what I call “Filipinophobia.” An irrational fear of the Filipino. What would I experience in my own country in 2019?

The drive with my wife, dog, and cat was going smoothly. And then we hit a tumbleweed outside Wendover, Nevada. That’s Wendover, not bend-over.

The tumbleweed punctured my radiator in the tumbleweed equivalent of a paper cut. My car slowly bled coolant through Utah, Wyoming, Nebraska, then finally said, “Hold your horses” in Iowa.

Just my luck. To be stuck in Iowa and not be running for president.  Iowa—the home of Congressman Steve King, the white supremacist, not the science fiction writer.

Rep. King is his own brand of political horror show. He’s perhaps the leading “sanitized” white supremacist today. I say sanitized because he’s still in Congress despite his hate-filled rhetoric. He’s vehemently opposed to what most would consider reasonable compromise on immigration. He’s against multi-culturalism. He thinks diversity is a bad word.

Iowa is a place where I can walk into a public restaurant and easily be the only non-white guest in 2019. Unless you’re Filipino, and then you probably own the restaurant and are beholden to your guests. Or you aren’t the owner, just the server. And can you fill my water, please?

There’s a lot of grin and bear it in this state. My wife, who is white and from Ohio, sometimes has to be my human shield.

One thing I noticed in Iowa is that white people are often in jobs you wouldn’t expect. There were as many young whites in the hotel cleanup crew, for example. They’re taking our jobs! And even when they had jobs, I still found them driving for Lyft.

This is the same weekend Trump is boasting a 44 percent approval rating, his highest since April 2017, according to a Washington Post/ABC News poll. Fifty-one percent think he’s doing a good job on the economy, and this is considered important for 82 percent of adults thinking about the next election.

But talk to my Lyft driver. Amanda is white, 36 years old. She works, eats, and works. She works at Wal-Mart as a manager. But she self-demoted herself to save her mind. She makes thirty-seven cents an hour less, but sees the value in less stress. In her free time, she drives with Lyft.

“Got to make ends meet,” she says from the driver’s seat of her Chevy Malibu. The Iowa Caucuses are still six months away. But I ask her which candidate appealed to her.

“I don’t follow none of it,” she says. “I don’t watch the news. I stay out of it.” She doesn’t see the connection to all the noise in DC. And she’s probably considered reasonable compared to the followers of Rep. Steve King. Washington doesn’t make sense to her and her life, she’s out there struggling. Wonderful economy? Don’t kid yourself.

That’s why you shouldn’t look to the polls. Or to the media. Respondents are likely voters. But there are people like Amanda who don’t show up and don’t count. They were the surprise in 2016. Some of them decided to vote in a “what the hell, what do I have to lose, it’s democracy” moment. Monkey wrench time. And look what we got.

From now throughout 2020, if you don’t want a repeat of 2016, don’t focus on the “mainstream media.” They’re following each other and likely to miss the Amandas in all the places they missed her in 2016.

Look to the polls for an ultra-generic sense of things. You surely won’t find many Asian Americans in the sample, so you’re not going to see any insights about us. For that you’ll have to look at the  Asian-targeted polls. Of course, you can talk to the small business owners of Iowa, like I did in 2016.

But even then, I missed a key sentiment that was all around us and ignored. It made 2016 what it was. You’ll find the missing puzzle piece by talking to the white Uber and Lyft drivers in Iowa, home of Rep. Steve King. We might think Asian Americans are alone in a hidden America. But others are hidden too. It just took a tumbleweed to stop me in my tracks to find them.

At least, my forced stay enabled me to watch the Women’s World Cup Final in the comfort of my cornfield suite. I didn’t have to do it while driving. And what a game.

I will admit to crying when I saw Rose Lavelle dribble the ball and take on and juke the Dutch defenders before striking that low drive with her left foot to the low right corner. GOOOOOOOOOOOOOOOAL.

Soccer is such a game of struggle, the back and forth, the failure, and then here comes a score to relieve it all. For all the soccer moms and dads out there watching, Lavelle is the epitome of the youth soccer life at its very highest level. Somewhat undersized at 5-foot-4, she’s gifted athletically and ran through the American soccer gauntlet with ease. The pride of my wife’s hometown, Lavelle went from rec league to traveling team, to high school star, to college star, to pro, to world-beater, finals goal scorer. This is the dream path of many a young girl in America.

But it was more satisfying watching them live from the stands with my Under-12 squad when the USWNT won it all in 1999. My oldest daughter still plays for fun. But I taught her how to back-heel and fake with the ball (and legally elbow), and how to setup the header or score from the wing.

Seeing the USWNT win again back to back for the first time brought back so many soccer memories for me, as I’m sure it did for others. Now Rapinoe rhymes with Filipino, but you don’t need to see an Asian American on the team to identify with the U.S. Women’s National Team, the world cup champs.

We’ve had American Filipinos  on the team before. California’s Tiffany Roberts, a proud American Filipino and now a head soccer coach at the University of Central Florida, was twice a member of the team that finished 3rd in 1995, then won the World Cup  in 1999—the year of Brandi Chastain’s sports bra moment.

When the ticker tape parade goes through Manhattan this week, America will honor the champions, but let’s hope the women get the full recognition they deserve.

Why do they get less pay and support than the men’s team? The world is changing. We’re even seeing it with the other big story of the day. The Jeffrey Epstein arrest in New York and his indictment for sex trafficking of minors.

The shields that have protected white male billionaires are beginning to crumble. It’s a slow process, but there are signs of progress are all around. And it’s good for us all to see. Everywhere.  From Iowa to  Ilocos.

Emil Guillermo is a veteran journalist and commentator who writes a column for the North American Bureau of Inquirer.net. He does a one-man  show based on his “Amok” columns. See him in Washington D.C., July 20-28.

Get your tickets here.

MORE STORIES
House to Deliver Trump Impeachment Charge on Monday
Rodgers vs Brady – NFC Championship a Quarterback Clash for the Ages
Walmart Expands Vaccinations in Boost to U.S. COVID-19 Program
Don't miss out on the latest news and information.