Miss U on ending HIV stigma: ‘Just step in, educate, clarify for people’

Miss U on ending HIV stigma: ‘Just step in, educate, clarify for people’ 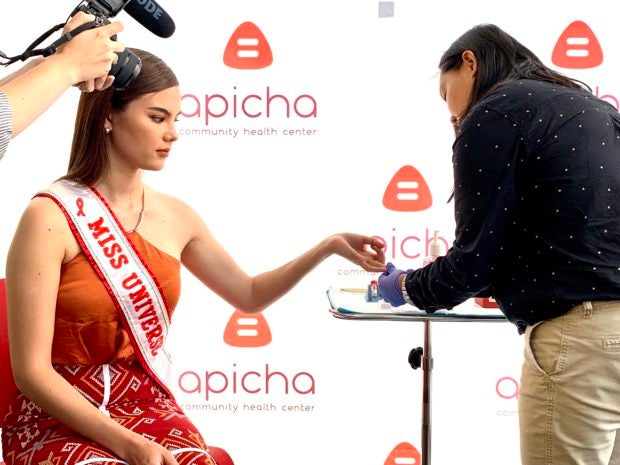 Miss Universe Catriona Gray takes a public HIV test to encourage people to get tested to know their status. Ending the stigma associated with testing that exists in many parts of the world is critical to ending the HIV/AIDS epidemic as it is estimated that 9.4 million of the 36.9 million people living with HIV worldwide do not know they are infected. INQUIRER/Elton Lugay

NEW YORK—Although HIV infection knows no gender, preference, orientation or race, as Miss Universe Catriona Gray stresses in her public statement about the disease. Some people are more vulnerable than others, and many are Filipinos.

After the 2017 UNAIDS global report identified the Philippines with the fastest growing HIV epidemic in the Asia-Pacific region, the Philippine Department of Health (DOH) reported last May that the number of diagnosed HIV cases in the country has been increasing from 1 per day in 2008 to 38 per day in 2019.

DOH data also show that one out of every three new HIV infection happens among millennials, specifically the 15-year-olds to 24-year-olds.

“It’s a little bit distressing that one of the largest groups that are affected with the new HIV cases are aged from I believe, it’s 14 to 23, which is very, very young. And I believe that we have to approach it in a multitude of ways,” Gray told INQUIRER.net in an interview June 26 following her public HIV testing at the Apicha Community Health Center as part of the Miss Universe Organization’s advocacy to end the HIV stigma.

“It’s important for us all to realize that getting an HIV test should be just as simple as getting a health check-up, blood pressure check, cholesterol check—just an act of taking care of your health,” Miss Universe 2018 said at the event. “It’s not a judgment; it’s just an act of looking after yourself. I don’t want people to live their life in fear and be defined by this.”

As a volunteer at LoveYourself, an NGO in the Philippines that promotes HIV testing, Gray is very much aware of the crippling fear of a possible HIV diagnosis.

“When I was volunteering at LoveYourself, hearing the stories of why people were not eager to get tested, it’s wrapped up in a lot of fear and a lot of stigma and that’s what we as a society, really need to help break down,” she told INQUIRER.net.

It begins with wholesome sex education. “Sex is quite a taboo subject for us Filipinos because we are conservative and those kinds of conversations don’t really happen at home. People educate themselves through their peers or the internet, so we should really start a healthy dialogue in the context of looking after your health,” Gray said.

Supporting not only government initiatives against the disease but especially frontline community organizations is another step. According to the reigning Miss Universe, far-flung areas in the Philippines do not have access to testing, education and counseling services that have been established in urban centers like Metro Manila—and could use more support.

The third approach, and perhaps the most important, is to end the HIV stigma in order to eventually end the epidemic. Everyone can participate in this by using “inclusive” or “supportive” language and calling out people who don’t. “If you ever hear someone saying something that plays into that stigma, just step in and educate and clarify for people—it’s as simple as that,” Gray said.

“I feel like if we take these three points and we really put our effort into that, not only millennials but every other Filipino will have the support that they need to never have to experience HIV,” she added.

According to the Miss Universe Organization, ending the stigma associated with HIV testing is critical because about 9.4 million of the estimated 36.9 million people living with HIV worldwide do not know that they are infected.

In New York City, there has been a notable concentration of new HIV diagnoses among Asian and Pacific Islanders living in Western Queens, Phillip Miner, director of grants and communications at the Apicha Community Health Center, said in an email. This is why more vigorous testing is being planned in the area, including opening a second site in Jackson Heights, he said. “We have the tools and ability to end the HIV epidemic worldwide. In accomplishing this goal, everyone’s journey starts with the same step: an HIV test,” Therese Rodriguez, a Filipina and CEO of Apicha Community Health Center, said in her remarks at the public HIV testing event.

Eyeing underserved and vulnerable New Yorkers, the community health center provides antiretroviral therapies to HIV-positive patients with the goal of bringing their viral loads to undetectable levels. “Undetectable equals untransmittable” in HIV treatment and allows patients to live happier and healthier lives, Rodriguez said. Meanwhile, HIV-negative patients who are at high-risk of contracting the virus are prescribed to take pre-exposure prophylaxis or PrEP, the HIV prevention pill.

According to Stephanie Hubbard, senior program planner at New York City Health Department’s HIV prevention program bureau, the annual number of new HIV incidence in NYC has declined by 64 percent since 2001, from 5,900 new diagnoses to 2,157 as of 2017, with the city’s aggressive interventions. New York State targets to end the HIV epidemic in its jurisdiction by next year.

“The Health Department frames testing, treatment, and prevention together as part of an overall health care strategy that we have coined an HIV ‘status-neutral’ approach. This approach reminds us that the outcome is basically the same —when someone with HIV is on treatment and maintains an undetectable viral load, they can’t transmit the virus to their sex partners, and when someone who is HIV-negative is taking PrEP as prescribed, they can’t acquire the virus.

“Taking a status-neutral approach helps to address the many stigmas associated with HIV and sexuality in general, because it helps normalize HIV testing and encourages universal and open conversations about sexual health and well-being. It also allows us to be more people-focused—that is, it helps us focus more on the patient and their needs rather than on their HIV status,” Hubbard said in her speech at the event.