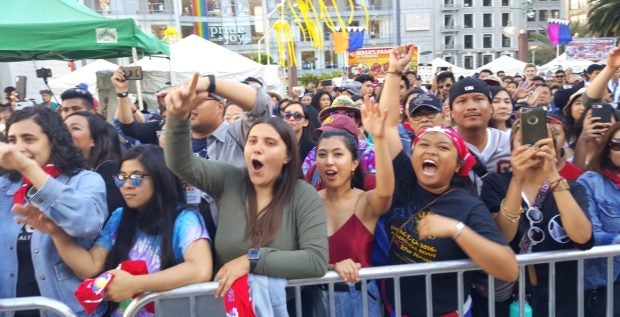 SAN FRANCISCO — To cap the month-long celebration of the 121st Philippine Independence Day in the Bay Area, the KalayaanSF organizing committee saved the best for last with the annual outdoor festival celebrating Filipino culture, heritage and pride in historic Union Square in downtown San Francisco.

Wiener, who represents the 11th California Senate district including Daly City, said, “With too much demonization and hatred in this country right now, we need to get back to supporting and loving each other and lifting each other up.” 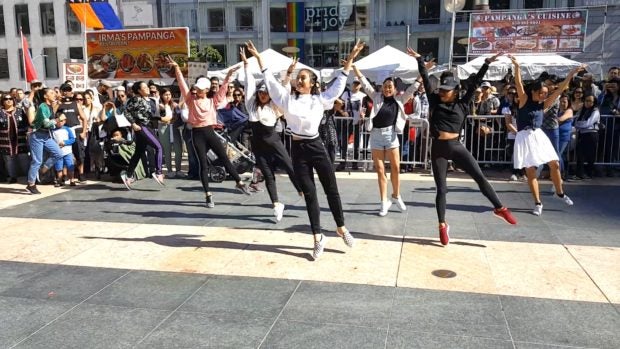 Members of the Philippine Ballet Theater give a sample of their terpsichorean talents as they dance to an upbeat number to the delight of the crowd at the festival grounds. INQUIRER/Jun Nucum

Cox, the world’s first armless licensed pilot and renowned motivational speaker, paid tribute to her Filipina mother Ines Macabari-Cox of Mercedes, Eastern Samar who believed in her despite her disability.

CBS-KBCW TV news anchor Dela Cruz, who was with CNN and MSNBC before, also spoke highly of her Filipina mother, who was the fourth of 18 children in Manila, became a registered nurse and worked very hard to bring her family to Canada: “My mother was a tiger mom who was really hard on me as she wanted me to reach for the stars. She just wanted me to believe in myself as she herself believes in hard work and perseverance.”.

Apuada, the only male and youngest awardee, continues to excel and has his sights set on becoming an Olympic swimmer. “I am going to do my best to empower them much more now that I am being looked up to not just by my peers but also by other young ones to succeed in life” he said. 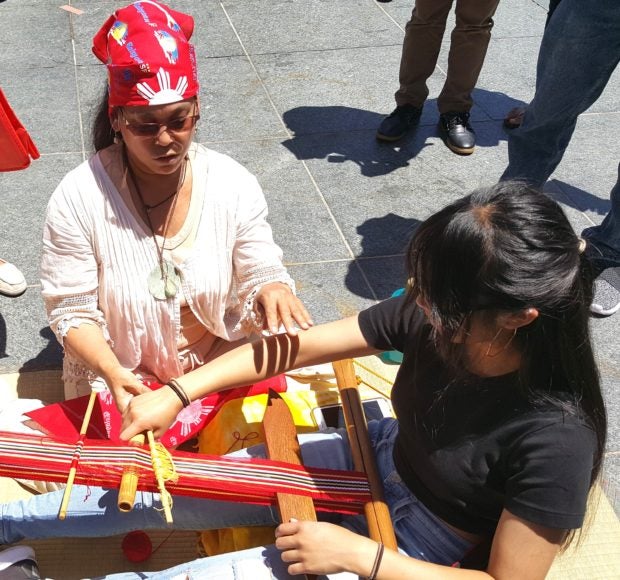 Not minding having to sit on a hot ground under the heat of the sun, this teenage girl seemed very intensely focused in not missing a beat in trying to learn from Kalinga Province native weaver Holly Calica at the Kalingafornia Laga weaving booth. INQUIRER/Jun Nucum

As in previous years, the 2019 KalayaanSF festival was a showcase for various exhibitors with a wide selection of mostly culture-themed products and services, food and crafts.

The audience was all hyped up by the time Milby and Ibarra went up the stage, and Union Square rocked to the beat of their songs. City College of San Francisco student Joemar Olit (center with flag)  wearing a barong under the searing heat of the sun as he goes around the festival site bearing the Philippine flag to invite anyone to have a selfie with him showing their Filipino pride. INQUIRER/Jun Nucum

Milby who grew up in Ohio, confessed, “I struggled with my identity and my heritage. I hope to reach out to the other Filipino communities who also do not know much about our heritage and don’t how it is to be a Filipino and celebrate with them and show the pride.”

Ruby Ibarra was born in Tacloban City and now lives with her parents in San Lorenzo, California where a lot of other Filipinos. She is known for her sharp lyricism and rhythmic multisyllabic flows in her rap music. “In a lot of my compositions I get inspirations from my parents from Davao and Tacloban — Dodong and Evelyn’s struggles. They had to work in job that were less than their degrees in order for us to have a better life out here.” 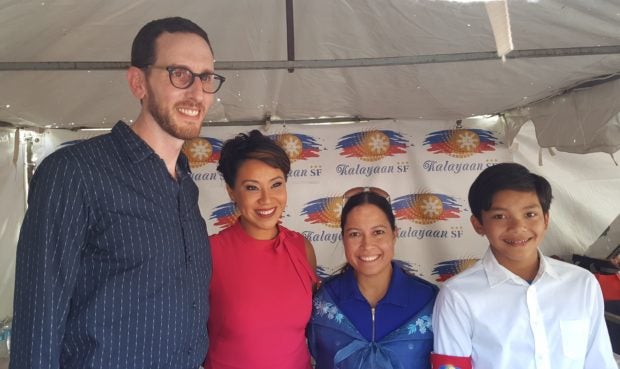 Kalayaan SF Chair Radi Calalang observed that the Independence Day festival has been growing every year for nine years now; “There are 500,000 Filipinos in the Bay Area and we are the largest Asian American community in California but we still have a lot of catching up in representing our population.”