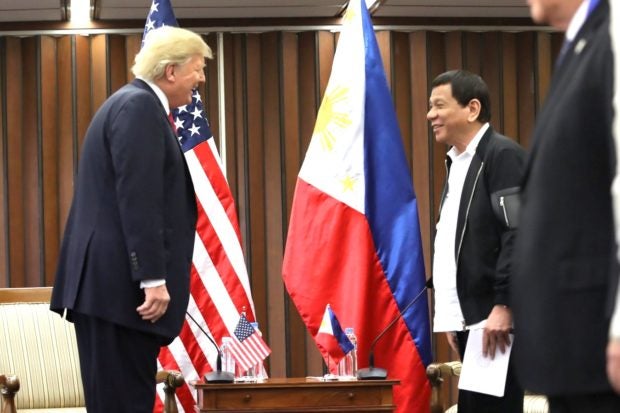 President Rodrigo Roa Duterte and US President Donald Trump share a light moment prior to the bilateral meeting at the Philippine International Convention Center in Pasay City on November 13, 2017. PRESIDENTIAL PHOTO

July 4th is upon us. For Filipinos in America, it used to be a real firecracker of a holiday. Two bangs in one. American Independence sure, but for Filipinos, it was also the official day we honored the Philippines receiving independence from the U.S.

Nationalists rejected calling it Philippine Independence Day. Because it never was. Historians set real independence in June, relegating the U.S.-granted independence to what we now call “Friendship Day.” Is there ever a good day to celebrate one’s colonization?

I was born in America.  So, I am an outside-insider. A patriotic native American with full Filipino blood. Because of my parents, we celebrated both the Fourth and the Port.  But always innocently and un-ironically. We weren’t mad at anything. Pass the Hot Dog Dinuguan.  It takes a few generations to let the truth sink in.

But the fact is, the days were always sold like a matched pair. It came in twos. Like teacups. You had the American one. And the Filipino twin. Everything Big Brother did but in brown and petite.

And it resulted in a compromised message of freedom. A white American voice was saying, “Just do everything we do, Philippines, and you will be fine.”

Not surprisingly, look at the results. Forcing “American” democracy in the Philippines got us its bastardization, Marcos. He was enabled by Reagan and Bush because they didn’t know what to do with the Philippines. It was simply there, ergo “strategic.”

Filipinos got smart. Benigno Aquino Jr., Marcos’ rival, came home from exile and was gunned down. And then it was the people and Cory to the rescue.

But Cory was weird since the playbook was no longer American-based, but people based, as in the Filipino people.

And what is Filipino? Ramos the West Pointer? Estrada the Movie Star? Arroyo the Bush Sycophant?

When we get back to Aquino III, somehow it was too late. The myth of Benigno Jr.  was gone and the yellow ribbons were untied.

We got Duterte for a reason. The have/have not economy is too extreme. It’s worse than the 1 percent model in the U.S. It’s not good in America either.  But it’s tolerated by the powerful.

In the absence of real economic equality, Filipinos end up defining their own sense of democracy and populism.

Mayors fix potholes. They do things to make people’s lives better. People respond to the pothole fixer. It was the right place and the right time. But also the right problem for Duterte, the Philippines’ Mr. Pothole Fixer.

Those of us who see governance as being driven by a sense of ideology and moral rightness don’t understand how an entire nation can be run on anything less.  But that’s where the people are in the Philippines. It’s all grassroots.

We cross our fingers and hope it all adds up to one big happy 7,200 island nation. But too often it doesn’t And  that’s where we’re at. Still with fingers crossed.

The populist Duterte and his practical but often extrajudicial antics have won support. One thing they don’t do is lead the Philippines to greatness. It keeps it small. Less than a dragon. And almost irrelevant.

And what about china?

The latest G-20 summit happened in Asia. Any mention of the Philippines?  Indonesia is there.  Among the invitees outside the membership were Singapore, Vietnam and Thailand. Philippines? Didn’t see it in the news.

The biggest rumbling is how Duterte is not going to call on the U.S. on the West Philippine Sea controversy because that would invite war. Duterte is trying not to anger China and appear somewhat strong at the same time, as if to say, the Philippines will deal with this on its own.

Meanwhile, the U.S. and China, at loggerheads over tariffs and trade, met at the summit and solved their differences. The Philippines barely a mention.

In the past, there would be no question. The U.S. would be there to support “little brown brother.” Like Arroyo was there to support the U.S. when it wanted to strike in the Gulf. The pipsqueak telling the giant it wants to help. It was comical, but it was one of the few times, Arroyo’s government did something strong.

And here’s the truth. He doesn’t care. In fact, no one does. So here’s the Philippines with its leader  Duterte rolling up into a defensive ball to be kicked by China.

People who value freedom and democracy know something is not right in this scenario. We have a leader who needs to summon up courage and vision, and he thinks he’s fixing a pothole.

I am an American-born Filipino, whose Filipino parents celebrated both their Americanness and their Filipinoness. This is the widest chasm I’ve ever felt that  July Fourth is no longer July Port.

Come see my columns come alive. My one man show, “Amok Monolouges: All Pucked Up,” is coming to the Capital Fringe Festival in Washington, DC. July 20-28.  Come get your tickets here:

Emil Guillermo is a veteran journalist and commentator. Follow him on Twitter @emilamok  Listen to him on Apple Podcasts.