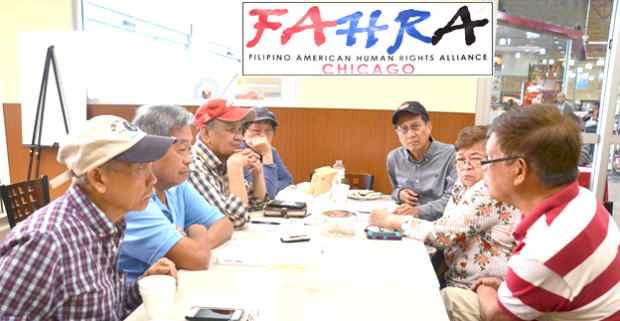 CHICAGO — Members of community media held “Usap Usapan” on June 15 with the Filipino American Human Rights Alliance to discuss the June 9 ramming of a Philippine fishing vessel by a Chinese trawler in the West Philippine Sea and the May 13 midterm elections.

Discussing the maritime collision near Recto Bank in the West Philippine Sea, FAHRA members recalled that on July 12, 2016, the International Arbitral Tribunal decided in favor of the Philippines, saying that China does not have historic rights to the South China Sea and that their “nine-dash line” claim has no legal basis.

The group urged Filipino Americans to support the call of the Department of Foreign Affairs secretary Teodoro Locsin, Jr. for United Nation members to enforce their duty under the United Nations Convention on the Law of the Sea (UNCLOS) to render assistance to persons in distress at sea. The Chinese boat that hit the Filipino vessel left the crew members in the water until a Vietnamese vessel rescued them.

Meanwhile, Ray Villar who was in the Philippines during the election shared his dismay about the election’s lack of integrity as he witnessed actual incidents of the alleged anomalies like vote-buying, ballot tampering and intimidation. He shared the peoples’ perception and beliefs that a foreign country played a role in the power disruption during the tabulation of the votes.

Joseph Lariosa of PhilaMessenger echoed Ray’s suspicions about possible cheating in the last election. He said, “It is hard for me to accept that nothing happened in the so called “seven-hour glitch”. It is so coincidental that the power disruption occurred following the 6 p.m. closing of the Election Day. There are just too many technical deficiencies in the system that one would suspect that fraud may have occurred.”

Meanwhile, Mariano Santos of Pinoy News Magazine suggested that Fi-lAms should engage their parishes to include prayers of concerns like the extrajudicial killings in the Philippines and Duterte’s attack on Filipino priests and pastors. He also proposed to think and talk about an alternative system that will truly represent the will of the people. He said, “If elections in the Philippines continue to become a sham and just a mockery of democracy then the people should decide to put up a more genuine form of democracy.”

Rico Cadayona said, “If we are going to create a difference in the Filipinos’ quest for a better Philippines, the effort should be through organized actions of committed Filipinos.”

FAHRA invites the community to attend the regular Usap Usapan to give participants the chance to air their sentiments and opinions. For more information about this Usap Usapan, please send your inquiries to [email protected]