SAN FRANCISCO – As protests in Manila greeted the visit of Chinese leader Xi Jinping, some Filipino Americans expressed frustration at the Philippine government’s “subservience” to China.

“I have an affinity for the Philippines even if I only stayed there for a short time because it is my parents’ homeland,” said Jinni Mabalot Bartolome. She said China’s occupation of parts of the West Philippine Sea is “so wrong. If there is wealth to be had from the natural resources of the Philippines, the Filipinos should benefit from it not anyone else.” Bartolome also voiced opposition to extrajudicial killings (EJK) in the Philippines. 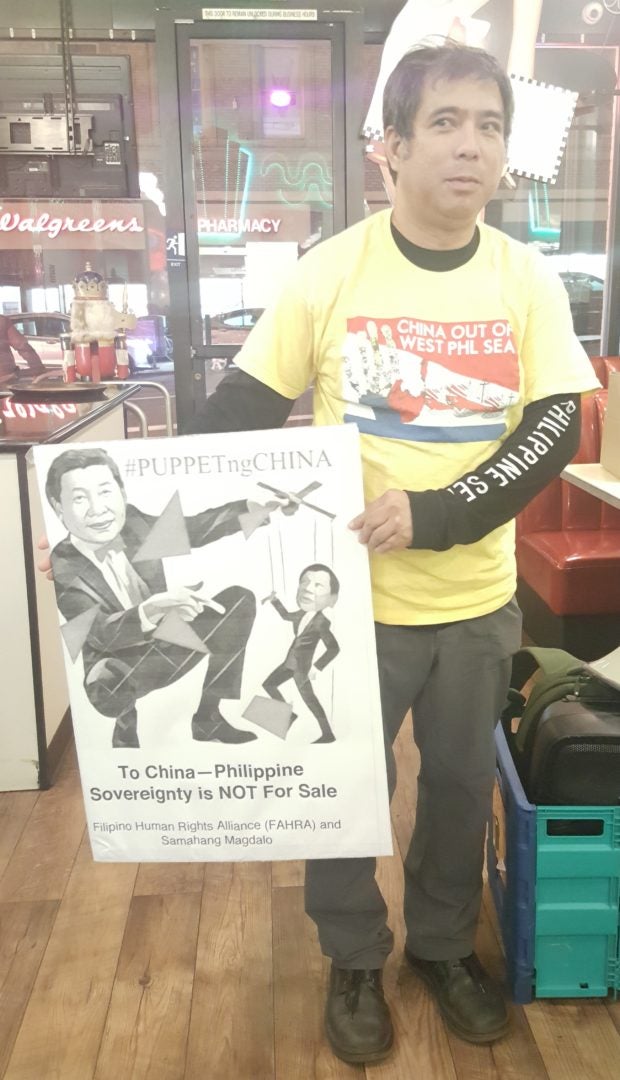 Another local resident James Herce expressed frustration at President Duterte “sellout of the Philippines to China’s Xi Jinping” and support for the illegal presence of China in the West Philippine Sea.

“I voice my opposition to the illegal military presence of China and also of Chinese workers in the Philippines in Chinese-funded projects. He hopes that more Filipinos will show their displeasure at China through boycott of Chinese businesses and products, and that someday Filipinos will have no fear of fishing on their own waters without harassment from foreign troops.

Joanne from the East Bay (who wished not to state her last name) said she wants Filipinos both here in the U.S. and also in the Philippines to know that we did not choose to be quiet even if we are far from the Philippines.”

Joanne is optimistic that “we can assert our victory in The Hague tribunal on China’s claim as a violation of the United Nations Convention on the Law of the Sea, that China would abide by the ruling as what we are claiming are really ours.“

“It’s a sad day in history to witness the coming of the master Xin Jinping to meet his puppet Rodrigo Duterte on Nov. 20-21 in Manila to seal not an agreement among equals but a complete sellout of national sovereignty to China,” reads a statement of the Filipino American Human Rights Alliance.

Some of the group’s members held flash pickets here and in Los Angeles to protest Xi’s visit. They alleged that Duterte was also paving the way for China’s economic domination of the Philippines.

Edwin Batoncgbacal, a FARAH member said in an email that “this submission to China by the very President of the Philippines ignores the wishes expressed by 87% of Filipinos who want the occupied islands back.” For comparison, Batongbacal stated that it took former dictator Ferdinand Marcos 18 years to accumulate $28 billion in foreign debt, from which Marcos allegedly stole billions, while Duterte has taken only one day to enslave Filipinos to Beijing’s promised “crippling foreign loan of $24 billion.”