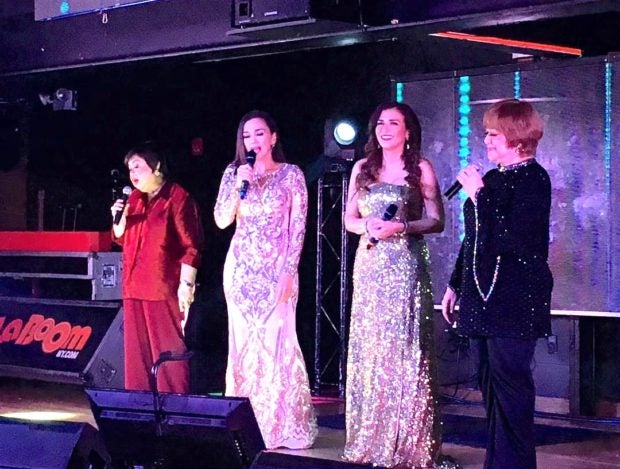 NEW YORK — It was a night of love, romance, heartbreaks, faith and laughter. Fond memories of yesteryear turned back the hands of time to the late ‘70s and then swung into the ‘80s and the ‘90s alternative music. Between songs that filled the hearts were old jokes that still induced belly laughs.

La Boom nightclub on Long Island City was filled with baby-boomer New Yorkers and their millennial family members, numbering to about 800. Ticket sellers were standing outside the club hoping to cash in on the clamor to see timeless beauties Kuh Ledesma and Zsa Zsa Padilla, ‘80s powerhouse singers, in a show dubbed “Diva 2 Diva 2.”

For four decades, Kuh Ledesma indisputably gave rise to the “diva” status of superb female singer singers. The “Renaissance woman” is known as an entrepreneur and a producer of musical shows and records. Her venue Music Museum at Greenhills and her award-winning broadcast Akuhstic Café opened so many doors to the next generation of divas.

Those who have been in the United States for so long were surprised when Ledesma talked about her relationship with Jesus. A born-again Christian, she spoke of how she “met the Lord” and overcame the challenges of her marital break-up. She shared the word, “Kung ako ikakahiya mo, ikakahiya rin kita sa harap ng Ama ko (If you will deny me, I will also deny you in the presence of God).”

She continued, “His grace is perfect tonight. If somebody didn’t share Him with me, then I would still have so many fears. Kung hindi ko siya nakilala (If I didn’t meet him) I won’t be here… I was bitter I was angry because I was separated from my husband… He saved me… If somebody ever invites you to attend Bible class, give it your time. It will change your life and it will open your eyes to the truth of the spirit world. Because we are made of mind, body, soul and spirit…May araw din kayo sa Dios (You will have your time with the Lord)”

She then sang a song she thought she’d never sing again, “Till I Met You.” Suddenly, the mood was back to the ‘80s, when Ledesma earned the title pop diva for her ingenuity. Kuh and Zsa Zsa Padilla alternately sang their hit songs.

Zsa Zsa Padilla, one of the most beautiful faces in the Philippine recording industry, emitted so much emotion as she rendered the top hits of Ledesma and her own popular music. She acknowledged that she was nursing a broken heart only three years ago. She sang an old favorite, “Through the Years,” after she talked about her late partner, Dolphy, and thanked one of the Quizon sons in the audience. Watch the video capture: https://youtu.be/D7TzXkASKzk

Between Ledesma and Padilla’s moving renditions, the hysterical antics of comedy queen Nanette Inventor and the one-woman band medley of Mitch Valdes broke up the audience. The multi-talented singers and comediennes proved that Filipinos can entertain any audience of any age, at any place and time.

Nanette Inventor is best known for exploring the cultural differences that make Filipinos very distinct in their choices and personal preferences, from their “ilong na pango” (flat nose) to their penchant for bleaching their skin with papaya byproducts. She has no qualms about crossing boundaries, exposing daily examples of ridiculousness and shameful habits. Her brand of jokes never gets old. 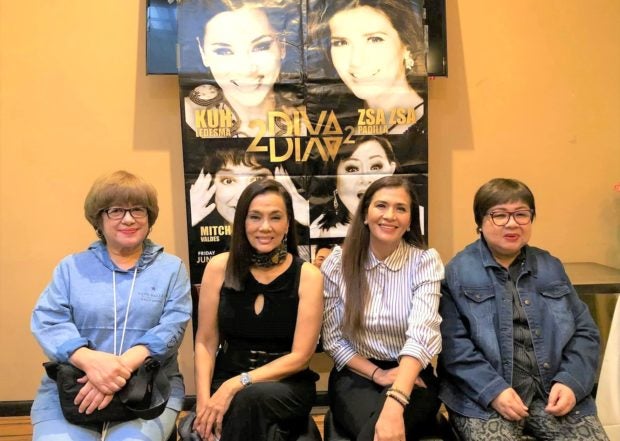 Mitch Valdez is a versatile performer, an award-winning actress, riotous comedienne, singer-rocker, all folded into one. She was a household name back in the ‘70s, also known as Maya Valdez. She talked about how she used to sing in a band at a 5-star hotel on Roxas Boulevard and took over the lead singers all night long. Her energy keeps a show running with a versatility that breaks the monotony of regular concerts.

Executive Producer Leni Stayman of Stayman Estates welcomed a possible come back of the divas to New York. She pointed out the difficulty of booking a venue in the city. The US Tour started in Los Angeles on June 1, followed by Santa Clara Convention Center on June 2, New York on June 7, Sheraton Hotel in Phoenix on June 8, Durnham Theatre in Houston on June 14, and ended at Caldwell Auditorium in Tyler, Texas on June 15.

Meanwhile, line producer Flordeliz “Baby” Lantin thanked all sponsors and announced the most awaited show of Pops Fernandez and Martin Nievera, dubbed as “Twogether Again” on August 16, 2019 in Atlantic City. Details of the show will be announced soon.