It’s Pride Month, and as the Queen of England might say, President Rodrigo Duterte a poofster?

Duterte was in Tokyo recently where reports say the Rod Man said he had “cured” himself of homosexuality with the help of “beautiful women.”

And “beautiful women”?  Were they conversion therapy types? Psychiatrists? With or without drugs? Priests with crucifixes? But that would be an exorcism, no? 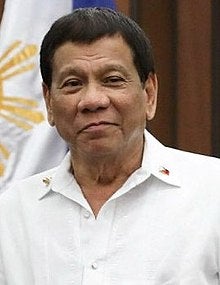 Or were they just standard Filipino beauty queens with sashes, tiaras and Imelda-shoulder dresses coming at him with a vacuum to suck away the gay?

Whatever. It’s the kind of odd Duterte rhetoric that makes him look like a fool. But it must play to his base. (Remind you of someone?)

It is the kind of thing you’d expect from a guy who has spent the last few weeks trying to convince the people he’s well after consorting with China. But this goes further to prove a “manliness” of sorts. In the 21st Century, it’s odd to say “cured” of homosexuality.

But his phrasing implies he has had – what shall we say—certain  feelings. Hmmmm.

Or maybe he’s sicker than we thought. It all came during a speech when Duterte was insulting Sen. Antonio Trillanes by calling the senator gay.

But he did so in such an odd way that Trillanes issued a statement.

“By admitting his(Duterte’s) gay past, I am beginning to be suspicious of the true nation of Duterte’s seeming obsession toward me,” Trillanes said. “It’s also entirely possible that his strongman projections are just a front…Whatever such comments by Duterte show how perverted and sick his mind is.”

Well that’s what I thought.

Duterte has said he was sexually abused by a priest as a teenager. So, he has some experience apparently. But to make a gay joke about it? Maybe he’d rather not use Grinder?

And then again it is June. Gay Pride Month in the U.S. Maybe he was trying to goose his support among gay Filipinos?

Or maybe we are really hearing a man’s public cry for authenticity and a chance at Ru Paul’s Drag Race?

Don’t know about that. But maybe he could be invited to a drag wedding. I was recently.

A relative of mine recently had a wedding in of all places, Fairyland in Oakland. Of course, it was an unorthodox wedding. But it was multicultural, multigenerational, and multigendered.

There’s something oddly liberating about the event. I remember feeling odd doing the Chicken dance at a wedding I went to years ago.

At a drag wedding, the Chicken dance is the warm-up.

In fact, you don’t even have to worry about getting up to dance. The floor is jammed, and no one misses your post-disco shuffle/C&W line dance attempt.

There will be no achy breaky hearts if you decide to be a watcher. The queens provide the entertainment. And they are ready to kill.

So, hearing Duterte, made me wonder. Maybe he’s not pin-pricking Trillanes, but he’s pining secretly for something to ease his pain. There’s something there. Or he’d just throw an innocuous dart at his rival.

But we are coming up to the real Independence Day. Sometimes a Filipino—even the reigning  authoritarian, macho gunslinger– just wants to be free.

Emil Guillermo is a veteran journalist and commentator. He writes a column for the Inquirer.net’s North American bureau.