When the Golden State Warriors were able to withstand the loss of Kevin Durant and the hot shooting of the Portland backcourt to win game two, Filipino American fan Rolly Bantugan, 64, wasn’t concerned about the Warriors in the first round of the NBA Western Conference playoffs.

Nursing some nachos while watching the game, Bantugan was sitting with his wife, Yoli, with no worries.

Who was going to win this series?

She’s as big a fan as her husband. And she was right.

After a close game three on Saturday in Portland won by the Warriors by a mere six points, the Warriors took the close out game Monday night seriously.

In game four, the Warriors used a powerful first quarter burst to thrust them to an insurmountable 20-point-plus lead they never relinquished, sweeping the Portland Trailblazers 128-103 to win the first round and advance in their quest for another championship. 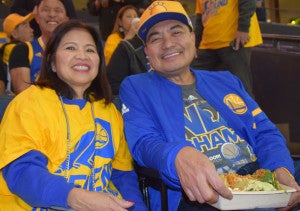 The Warriors were hotter than nachos for fans Yoli and Roly Bantugan. INQUIRER/Emil Guillermo

“They were just locked in and focused,” Warrior assistant Coach Mike Brown told the media after the game, saying it was “unbelievable” and that he’d “never seen anything like it.” Brown was filling in for head coach Steve Kerr, whose back pain forced him to miss a second game. But if his absence had any impact, Stephen Curry’s court generalship more than made up for it, especially in that opening blast.

With his deft ball handling at the point, Curry in the first two minutes had a defensive rebound, a steal and an assist to get the Warriors off to a 9-0 lead that left Portland dazed.

Curry got everyone into the act quickly, especially Kevin Durant, who returned to the starting lineup after sitting out the last two games with a calf injury. On his first touch, Durant took a Curry assist and hit a 25-footer for three. Minutes later, he took another Curry assist for a dunk to make it 14-0.

If Durant was bothered by the injury, it didn’t show on either end of the court.

In the next exchange, Durant was back on defense blocking Portland’s Maurice Harkless drive to the basket.

Curry finished with 37 points, seven three-pointers, seven rebounds, and 8 assists. Durant had 10 points in his 20 minutes of play. Draymond Green, always a presence on defense, was more of a shooter on this night with 21 points on 7-11 shooting, plus 5-8 from the three point line.

The Trailblazers never were in this game.

The Portland guards, who scored 75 points in game two, were limited to just 21 points after the first half, all from Damian Lillard.  C.J. Mc Collum, the other hot Portland guard was stone-cold on this night, shooting  0-7 from the field with no points at the half.  The score was 72-48 Warriors after two.

By the third quarter, the Warriors led by 30 even as the Trailblazers tried to find their way back. It started to look like a practice game with the Warriors whipping the ball around and scoring at will.

But with 6:11 left in the fourth, Portland, down 120-89, the white flag was finally raised as star guard Lillard (34 points, 6 assists) was pulled from the game.  His backcourt mate McCollum never got untracked and ended with just 6 points on 2-12 shooting.

The Warriors will now rest as they wait for the winner of the Utah Jazz and Los Angeles Clippers series, currently tied at 2-2. Both teams have suffered injury with the Clippers’ Blake Griffith being the most significant.

It’s hard to imagine either will be a test for a fresh Warriors group whose Portland effort showed the world—and the Bantugans—just how good they can be.