In the piece, Coleman recounts her youth and the ways she sought to figure out the identity of who she “should” be when she grew up. In striving to become the indisputable best, she finds that being the best isn’t always what one expects.

The production will be MaArte’s entry to this year’s San Diego Fringe Festival. Held throughout the world, Fringe Festivals provide “an opportunity for artists to showcase their works and performances with each other and with the local community.”

A founding member of MaArte, Coleman is collaborating with fellow founding members Christine “Yari” Cervas, who is directing, and Patrick Mayuyu, who is choreographing.

FEATURED STORIES
Ex-aide of Imelda Marcos is New York’s No. 2 tax cheat
Get Rid Of a Hickey In 90 Minutes
How ‘The Filipino Instant Pot Cookbook’ hit the spot

Born and raised in San Diego—her parents are from the Philippines; her paternal grandfather is from Texas—Coleman grew up always singing.

“Being a Filipino kid, of course,” she adds, laughing.

“In eighth grade, I was introduced to songs from Bock and Harnick’s ‘Fiddler on the Roof’ in my school’s choir class. From then on, I listened to show after show! Later that year I performed in my first-ever theater production ‘Bye Bye Birdie.’”

She went on to study music at University of California-San Diego and has performed with groups such as La Jolla Playhouse and Barn Stage Company.

The idea for the piece came to Coleman last year. From her own personal experiences, Coleman says she felt pressure during her youth from different cultural sources. 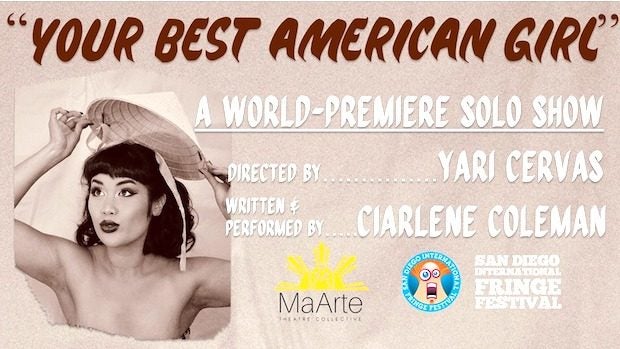 “Growing up the way I did, I felt like being the ‘best’ American I could be meant being assertive and likable.

“Being the ‘best’ Asian woman—as my Asianness is very much attached to my gender—meant being obedient and small.

“Something I wanted to focus on with the show is how difficult living with multiple cultures can be, specifically for mixed-white and Asian American women.”

Coleman also wanted to grapple with the effects of society’s influence and expectations on young Filipino Americans like her.

“I had always been conscious of how Asian and Asian American women are portrayed in American media. I understood it affected me as my acting career continued to grow.

“My spare thoughts and essays on the subject evolved into this show, with my own personal life experiences added in.”

As a way to explore this particular subject matter, the show provides Coleman a vehicle to revisit and comment on snippets of mass media audio and imagery from her youth.

The show will use projections of scenes from animated and live-action movies and television shows that Coleman was exposed to as a child.

“I will physically ‘shadow’ different characters being projected on the screen while lip syncing their dialogue,” says Coleman. “This way, I physically ‘insert’ myself into the stories I grew up with.”

Founded in 2018 in response to a deep lack of Asian American representation on stage and in film, MaArte Theatre Collective seeks to create space for the Filipino American experience through fearless storytelling.

MaArte’s Summer New Play Festival returns this August, featuring eight new Filipino playwrights and poets. “Mga Alamat Kami” celebrates the stories and myths that make us who we are.

MORE STORIES
Sex, the City, and Two Popes
For 2020, California goes big on health care
Ex-aide of Imelda Marcos is New York’s No. 2 tax cheat
Don't miss out on the latest news and information.

LATEST
Ginebra celebrates latest title with beloved fans
Jo Koy’s short car ride to his show’s venue was a joke in itself
Mark Bautista to take songwriting seriously in 2020
Sharon on who her bashers ‘support so blindly’
MOST READ
usa Ex-aide of Imelda Marcos is New York’s No. 2 tax cheat
usa US immigration 2020 – what’s in store for Filipinos, other immigrants
usa LA school board okays Filipino Heritage and History Month
usa How ‘The Filipino Instant Pot Cookbook’ hit the spot
usa Oxnard, California taps first Fil-Am police commander
usa What to know about California’s 2020 minimum wage hike
usa What’s in store for baby boomers in 2020?