Self-love, thy name is Donald 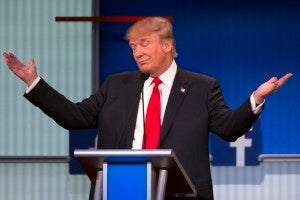 NEW YORK — Holy Week, the most sacred on the Christian calendar, is when the end days of the Christ are remembered, from his agony in Gethsemane and crucifixion and death, to his resurrection. His Passion becomes an occasion for one to reflect on many issues—personal, political, spiritual. While one can distinguish each from the other, I find that often, in practice, these three realms are inseparable.

One need only consider the tone and substance of the current dispensation in Washington to see right away how this is so. The presidency, as has been remarked, doesn’t change but rather reveals who one is, to a degree much more evident than would have been the case had one remained a private citizen.

Obama was christened “No Drama Obama,” rightly so, for his almost unfailingly cool, reasoned approach to the many demands made on his presidency by realpolitik. Cool but also impassioned when he needed to be.

Not to belabor the point, but the Donald is an out-and-out narcissist with a penchant for fabrication. His most avid supporters—bless their little hearts, they do have the courage of their convictions—see this in all probability as nothing more than a minor character flaw. In a sense they are absolutely right: had he remained in the private sphere (had the popular vote and not the Electoral College been the final arbiter), he would have been seen simply as a wealthy, though perhaps not that wealthy, unimaginative mogul with a lifelong love affair with … himself.

(The same can be said of for example Imelda Marcos. Had she not been half of the conjugal dictatorship, she would have come to be regarded as just another fabulously rich woman whose insatiable appetite for acquisitions would have been grist for the gossip mills but never have thrown the economy of a whole nation out of whack.)

In the Donald’s case, what is irredeemably personal is also political. His style is that of the capricious ruler, as though we were back in the medieval ages when the divine right of kings was unquestioned. This may not be so damning were his personality a magnanimous one, able to harbor a vision beyond the parameters of the self, to include and be sensitive to the needs of those he would govern and unfailingly set those needs above his.

In other words, to have empathy and be a man for others. In the Christ’s case, this was to offer his life for the salvation of all.

That is not going to happen anytime soon with the Donald, alas, for empathy is as foreign to him as civility, refinement, and subtlety are to Rodrigo Duterte.  It’s simply beyond the Donald to be such a man. To expect otherwise is folly. What needs to be done then, above and beyond pointing out that this Queens native is unfit to be president, is to resist all on his agenda that wreaks harm on a broad swath of citizenry, whether of these United States or of the world.

As far as I can see, his agenda, his view of the world order, is shot through with toxicity, for the simple reason that it lacks a moral imagination.

His order to use cruise missiles against Syria in retaliation for a chemical attack that caused the deaths of babies has been applauded, the Assad regime rightly condemned. But foreign saber rattling is the cheapest trick in the book, one routinely deployed in order to counter domestic ratings that are abysmal. The Donald says he acted as he was moved by the grim images of dead children due to the use of sarin gas.

And yet he shuts the doors to Syrian refugees fleeing the violence that shows no sign of abating any time soon. He wants to slash U.S. contributions to the United Nations, especially to programs that are vital to humanitarian aid, whether that entails protecting refugees, advocating for human rights, food programs for the poor, or vaccinating children. As a good friend remarked, it is so much easier to press the military button than it is honor the spirit of this country and take in those fleeing

Do not be fooled then by his “grief”: Those are crocodile tears.

If one needs more proof of the Donald’s hypocrisy, one need only look at what his version of health care would mean: the loss of coverage for millions of Americans, including a significant percentage of those who voted for him. Any Trumpian laments for children who would be direly affected have yet to be heard.

As for his claims to transparency, that’s a laugh. Why for instance and for the umpteenth time does he refuse to release his tax returns? What is the man hiding? To his weak rejoinder that no one cares, there were marches all over the country demanding to see those returns. Man up, Donald.

Who he cares for are simply versions of himself: white males, moneyed and privileged. It is not hyperbole to say that in the end the Donald’s policies are onanistic.