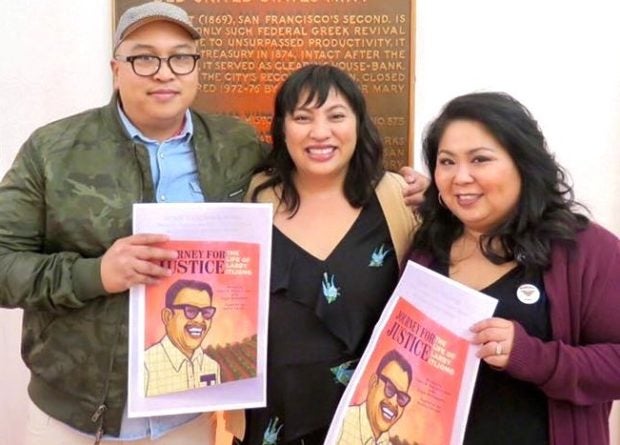 Journey to Justice: The Life of Larry Itliong is  illustrated by Andre Sibayan (from left) and cowritten by Gayle Romasanta and the late historian Dawn Mabalon. CONTRIBUTED

Journey to Justice: The Life of Larry Itliong is cowritten by the late historian Dawn Mabalon and Gayle Romasanta with illustrations by Andre Sibayan and published by Bridge and Delta Publishing.

The publication is making its third stop in its national book tour in New York at John Jay College of Criminal Justice on May 18 Saturday, followed by Washington, DC on May 20 Monday at Busboy and Poets bookstore’s Brookland branch.

Itliong immigrated to the U.S. in 1929 and worked as a farmer and led the Grape Strike in Delano, California in 1965. He cofounded the United Farm Workers Union and convinced the Mexican American farmers, led by Cesar Chavez, to join the strike. The strike lasted for five years and led to a breakthrough in labor rights in the US.

The book tackles a component of American and Filipino American history by showing how Itliong helped create the largest farm labor movement in the history of the United States.

Both the New York and Washington, DC family-friendly events will feature an overview of the free teacher’s guide created by [email protected] Educational Partnerships, a Q&A and book signing with co-author and publisher Romasanta, and a tribute to the late Mabalon (who died last year before the book was published). 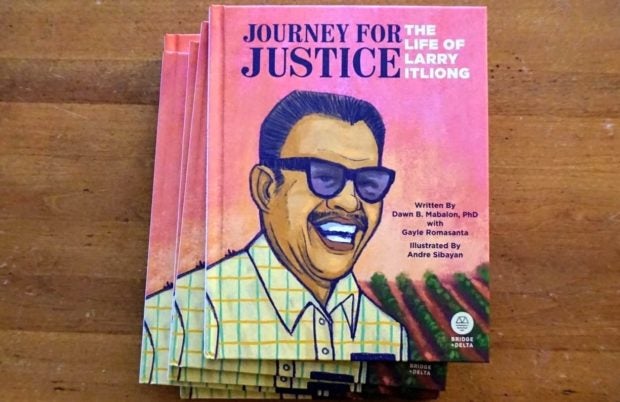 Children’s book Journey to Justice: The Life of Larry Itliong is published by Bridge and Delta Publishing. CONTRIBUTED

The book tours will also feature performances by Filipino artists and students as well as speeches from community leaders like Kevin Nadal in New York, who is a Filipino American National Historical Society (FANHS) national trustee and psychology professor at John Jay College of Criminal Justice; and Ben de Guzman in Washington, DC, who is the Acting Director of Asian and Pacific Islander Affairs at the Mayor’s Office.

“As one of the largest immigrant groups in the country, we want our history to be recognized and our stories to be told, says Nadal. “We’re happy to honor the legacies of both Larry Itliong and Dr. Dawn Mabalon here on the East Coast with the New York City community.”

The 15-city national book tour—which kicked off earlier this year and with stops already completed in Delano, California and Seattle, Washington—aims to create a movement with Filipino and Asian Pacific Islander nonprofit organizations throughout the country to bring the history of Larry Itliong to their communities. 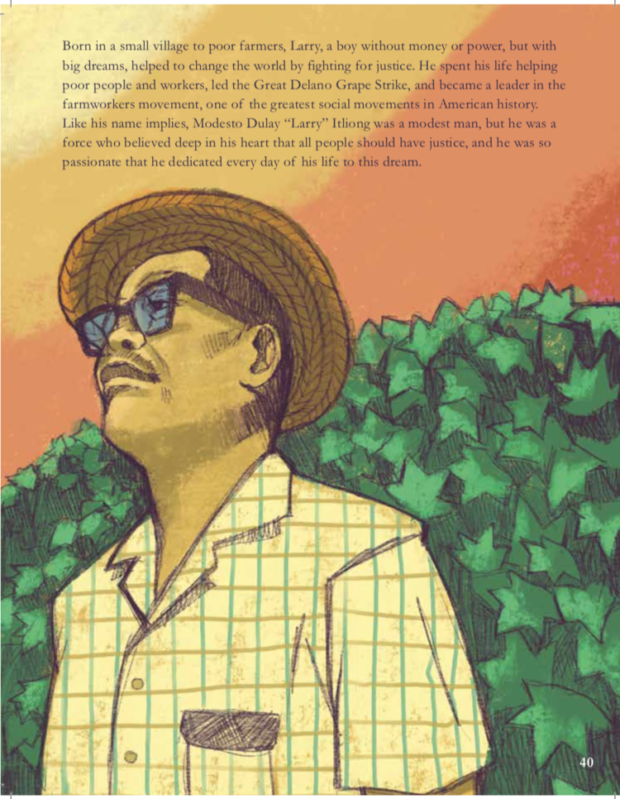 A page from Children’s book Journey to Justice: The Life of Larry Itliong. CONTRIBUTED

While the book celebrates Itliong, it also highlights Mabalon’s life work as cofounder of Little Manila Rising (formerly Little Manila Foundation), FANHS scholar and trustee, San Francisco State University professor, and author of multiple books, including Little Manila Is in the Heart: The Making of the Filipina/o American Community in Stockton, California.

Romasanta says, “Dawn saved the remaining Filipino neighborhood Little Manila buildings in her hometown of Stockton and named the area ‘Historic Little Manila,’ she traveled the country speaking and connecting with the community and spreading her wealth of knowledge about American history, Filipino American food history, and more.

“Dr. Mabalon was the leading Filipino American historian before her untimely passing. She made history accessible and was a revered community activist. She not only was a scholar, but her work touched the Filipino American community on a national scale.”