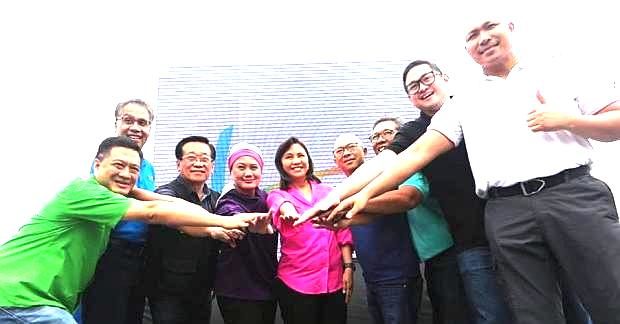 I’m used to getting strange messages from politicos in the U.S., but the vote now texts are going out to Filipinos in the U.S. who are dual citizens.

And don’t forget to vote for democracy.

Duterte was pretty salty last week when he said opposition candidates do nothing but criticize and would go straight to “impyerno”—which I believe is just  south of Davao.

But the Senate slate shouldn’t be seen as anti-Duterte. Only as pro-democracy.  You want a rubber stamp Senate? Or do you prefer fairness, the checks and balances?

Remember if you’re Filipino in the United States, Duterte is as close as it gets to a brown Trump.

They belong to the AMA— the Authoritarian Mutual Admiration society. And that’s not a good thing.

You can try to ignore it and say, Duterte’s “over there.” And then run to the Stateside Jollibee.

But you’d be burying your head in a bucket of coconuts.

For those in the U.S. , it’s here again—Asian American Pacific Islander Heritage Month.

God bless you. It’s not a sneeze. It’s something we celebrate in America every year. But a friend of mine seems to be growing weary of it all.

Instead of joy for the month when people of Asian American and Pacific Islander descent can feel united and strong in ethnic coalition, my friend has this strange “Groundhog Day” feeling.

Not that “things are repeating until we get it right” feel. More like empathy for the literal groundhog, as in, if you see your shadow, it means six more weeks of racial winter—or general discontent.

You get what I mean. We’re still in a long hard slog during what is arguably the most contentious political environment since the Civil Rights era began.

It’s not easy being an Asian American during the Trump administration. Not even if you’re married to Mitch McConnell.

So many things over which one must stay vigilant.

Maybe this month, this year, we take a deep breath, count our blessings, and focus instead on others who really are up against it this month.

My suggestion for AAPIHM person of the month? Philippine journalist Maria Ressa.

She chose the latter, where she founded the award-winning news website Rappler, the go-to source for hard-hitting truthful journalism about the Philippines.

It also has gotten Ressa arrested twice since February: once for an alleged violation of a ban on foreign media ownership and another time for a cyber libel case.

In New York City recently to be honored as one of Time Magazine’s “100 Most Influential People of 2019,” Ressa also received a journalism award from Syracuse University.

For a journalist, awards are like shields against the threat of arrest and assassination.

They’re handy in the Philippines, where journalists are killed frequently.

Last week, a Manila newspaper with links to Philippine President Rodrigo Duterte printed a matrix-like flow chart of journalists from independent sites like Rappler as well as the Philippine Center for Investigative Journalism. The chart identified them all as coup plotters.

Fake news for sure. But the docile Philippine National Police says it will investigate.

And President Duterte, who picked up the “fake news” mantra from Trump, is taking it all seriously. He’s quoted as saying, not so reassuringly, “Just because you’re a journalist, you are not exempted from assassination.”

You don’t take a statement like that lightly from a man whose administration the UN says has killed 27,000 since 2016 in its “War on Drugs.”

It’s the same shoot’em up that’s been praised by an envious Trump.

Deaths — 27,000. That’s not like Trump boasting about shooting one person on Fifth Ave. and not losing any voters. Duterte has 27,000 lives on his hands and hasn’t lost any of his base voters. Some of the deaths were connected to the drug trade. Some were just caught in the middle, total innocents like mothers and children. Rappler and others have been trying to get their hands on the public documents. Most are incomplete, unfiled, or lost.

The dead have become part of the bureaucracy.

And yet with all that, Ressa has returned to the Philippines ahead of major elections on May 13 that will determine control of the Senate, and the future of the country.

An election to end democracy?
There is much at stake this month in America’s first colony. Remember, the Philippines was built as a democratic facsimile of the U.S., complete with a Constitution, Bill of Rights, and the three branches of government.

There are checks and balances now against autocratic rule, but probably not if Duterte manages to win control of the Senate in the upcoming elections.

A new Senate would mean a new Constitution, Ressa told Amy Goodman on the program, “Democracy Now.” And with that a new form of government.

“It will be parliamentary. It will most likely be a federalist form of government,” Ressa said. “The substance of it will fundamentally transform the democracy that we have, take away a lot of the Bill of Rights, and put a lot of power in the hands of President Duterte to appoint a transitional committee. We will no longer be a democracy. Our justice system will be completely transformed.”

That’s how quickly it can all go in a few weeks if the Senate flips.

There’s a lesson there for us all, since the Philippines and the U.S. both have leaders yearning to evolve their autocratic power. Duterte is slightly more accomplished with all he’s killed during his drug war. But in just two years, Trump has been no slouch, with not just a Mueller Report under his belt, but a milestone 10,000 lies or misleading statements, according to the Washington Post.

We have a president who remains unimpeached and unindicted. Is he…above the law? Do you feel our constitutional crisis yet?

That’s why it’s not farfetched to think what happens next in the Philippines could easily happen here–if we let our guard down.

“The Philippines is a cautionary tale for the United States,” Ressa said on “Democracy Now.” “What shocked me is how fast things can change. And I think Americans need to be aware that the things that you think have been there for a very long time, it can turn on a dime. And within six months in the Philippines, all of a sudden it’s OK to kill. If you look at Cambridge Analytica, that scandal, the most number of compromised accounts are in the United States. The country with the second most number of compromised accounts is the Philippines. You can do a lot with the technology that is there. And if your leader is pushing top down, society can transform. Your institutions are still pushing back. But the same thing that I tell Filipinos: Now is the time to fight for your rights. If you do not fight for these rights, they can be taken away, and it can happen quickly.”

Fighting for justice and democracy is always a worthy goal for AAPIHM.

That’s what Ressa, who grew up an American but battles now as a Filipina in her home country, is up against this May.

If you’re one of the more than 125,000 dual citizen Filipino Americans eligible to vote from the U.S., she can use your help. Don’t forget to cast your vote.

This time, it really matters.

Emil Guillermo is a journalist and commentator who has covered Washington, DC.  He writes a column for the North American bureau. Twitter @emilamok